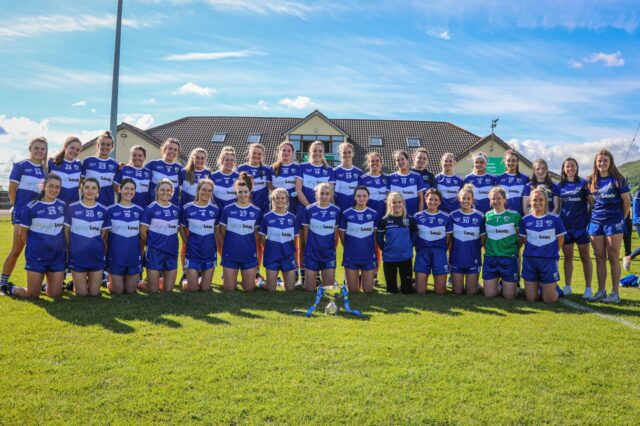 2019 was a very bleak year for ladies football in Laois.

The county side, managed by Dave Gibson at the time, had won the Leinster Intermediate title under Kevin Doogue the year previously.

However, a number of players stepped away this year from that team and a very young Laois side struggled as a result.

They failed to win a game in the league and were relegated to Division 3 and the championship didn’t go much better.

They fell to Meath in the quarter final of the Leinster championship and the All-Ireland series saw defeats to Wexford and Clare.

That sent Laois into a relegation playoff with Limerick where they managed to end a miserable year on a high note with a win to retain their Intermediate status.

Gibson departed in the off season and was replaced by former Laois footballer Donie Brennan.

The Arles-Killeen man was only weeks into the 2020 campaign when Covid-19 struck that March and action was halted until the following October.

Laois were far better when games resumed and defeated Sligo plus Kildare in the group stage either side of a loss to Clare.

It wasn’t enough to progress to the semi finals but Laois were not in relegation trouble either – so it was an improvement on 2019 and the seeds were sewn for better things in 2021.

Laois breezed through the group phase of the league with wins over Kildare and Longford before losing to Wicklow in their final game with qualification for the semi finals already assured.

Here, they produced a stunning comeback to see off Roscommon before clinching silverware in the final against Kildare.

Sarsfields’ Joyce Dunne joined the panel midway through the league and she would play a pivotal role in the All-Ireland Intermediate Championship.

That once again began with wins over Kildare and Roscommon to send Laois into the quarter final.

Here, they enjoyed a six point win over Louth and went into the semi final last weekend against Wexford as firm favourites.

But that game just didn’t go as expected which is just simply how sport goes sometimes.

Laois weren’t as fluid in attack as they had been in previous games while Wexford were ruthless with the chances that they got.

A first appearance in Croke Park since 2013 slipped away from Laois but when you look back to where they were two years ago, the improvement they have made is undeniable.

The first thing that Laois LGFA must now do is ensure that manager Donie Brennan and his team stay in place for 2022 to continue the progress that has been made.

Younger players like Fiona Dooley, Eva Galvin, Orla Hennessy, Erone Fitzpatrick and Alannah Havill are improving all the team – while there are many more dotted across the county that can be added in next year.

Laois will also play in Division 2 of the National League next year where they will come up against a far higher standard of opposition that will provide them with a better championship preparation.

One of Tipperary, Cavan or Tyrone will drop into Intermediate next year while either Westmeath or Wexford will be promoted to Senior.

On September 5, Meath will take on Dublin in the Senior All-Ireland final in Croke Park.

In 2020, both Laois and Meath were Intermediate teams so the fact that Meath have progressed to the summit of the top tier shows that Laois are well capable of doing the very same.

More improvement is required in 2022 – but this Laois team are well capable of it.