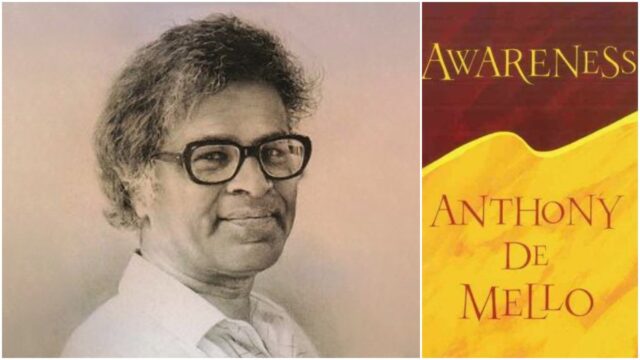 The person who has probably done most in the Christian world to promote the idea of concentrating on our breathing as a form of prayer is the Indian Jesuit Tony de Mello, who sadly died prematurely in 1987, at the age of 55.

He was greatly influenced by Buddhist spirituality. He gave a number of retreats in Ireland and made a lasting impression on all who heard him.

He was not always favourably received, as some of his views were (at least at that time) controversial. His most constant message; God loved us unconditionally.

This may seem rather commonplace today, but when Tony began his retreat ministry there was a strong emphasis in the Catholic Church on sin and the divine punishment for sin, so most Christians believed that God did not really love us unconditionally, but only on condition than we did not sin, or at least that we repented for our sins.

Tony did not always give clear and immediate explanations as to how concentrating on your breathing could be a form of prayer. Furthermore, his insistence that it could take many hours of this exercise to experience the spiritual benefits of this form of prayer meant that not too many of his listeners persisted in the exercise long enough to discover any benefits for themselves, since they were carrying out the exercise in blind faith, and were inclined to waver along the way, like Peter walking on the water.

The breathing awareness exercises that Tony prescribed were very simple: “Become aware of the air as it comes in and goes out through your nostrils… Do not control your breathing. Do not attempt to deepen it. This is not an exercise in breathing but in awareness. Observe it.”

Tony’s main point was that people live too much in their heads, and are far too little conscious of the activity of their senses. As a result, he stated, they rarely live in the present. Even in their prayer, they are almost always in the past or in the future, mulling over their past sins or praying for some future event to happen, or perhaps not to happen. But, as Tony put it, God isn’t yesterday or tomorrow; God is now.

To succeed in prayer it is essential to make contact with the present, and the only way of doing this is by getting out of your head and returning to your senses. It is certainly true that you can think about the past, and about the future; but you can’t feel something from the past or future. You can only feel what is happening now.

Before you use awareness of breathing as a means of prayer, it is important to think about what you are hoping for from this kind of prayer. It is probably not helpful to think of it as a way of communicating with God, but rather of giving God an opportunity to communicate with you. This is an understanding of prayer characteristic of St John of the Cross, who said “if the person is seeking God, much more is her beloved seeking her”.

As Tony de Mello himself wrote, “The Holy Spirit is not produced by any efforts of our own. He cannot be ‘merited’. There is absolutely nothing we can do to get him. We can’t produce the Spirit. We can only wait for him to come”. So the intention with which we embark on this kind of prayer is important.

Tony talks about the importance of removing the ‘dross’ in prayer.

By dross in this case he means the vast number of thoughts and words and images that we interpose between ourselves and God when we are communicating with God; or perhaps even more to the point, when God is trying to communicate with us.

But it is impossible to clear the mind of dross unless we put something else in its place. We can’t think of just nothing. If you try to ‘clear your mind’, thoughts will run in from all over the place. Clearing the mind is achieved only by getting out of the mind (to the extent that this is possible), and by substituting sense impressions (in this case awareness of our breathing) for thoughts.

In this kind of activity we are firmly in the now, where God resides, which puts us, so to say, on the same wavelength. Live in the present moment, says Tony de Mello. Why not concentrate on the now, instead of hoping for better times in the future?

So, in short, in order to make awareness of our breathing an effective way of praying, it is important to enter prayer with the aim of waiting for God to communicate with us, and then to give our attention solely to our breathing as a way of silencing our minds, and clearing the ‘dross’ from our minds, and in this way to enter into the ‘now’ of God’s action in the world.

This is not to expect any conscious messages or revelations, but just to leave ourselves open to the touch of God’s spirit, in the hope that this may slowly, over time, change our lives, in most cases without us even realising what is happening to us.

Tony de Mello also suggests that it is questionable whether this should be our only way of praying. For one thing, concentration on our breathing for very long periods of time could bring about unwelcome psychological effects.

A few minutes a day may be enough for many people. It is also possible that if we make awareness of our breathing our only way of praying, it can be due to laziness – it is also important for our spiritual life to take the time to build up some images and words, perhaps from the Bible, which can echo in our hearts when we are praying.

Tony de Mello describes other forms of prayer, and though some of these exercise the brain more than simple awareness of our breathing, they also focus on the now, and leave room for the action of God’s grace in our lives.

It is important to admit that praying can be at times a fatiguing and frustrating experience, especially when it is riddled with distractions. Giving our brains a rest from time to time, and returning to our senses, can relieve the tension in our prayer, and bring us moments of deep peace.