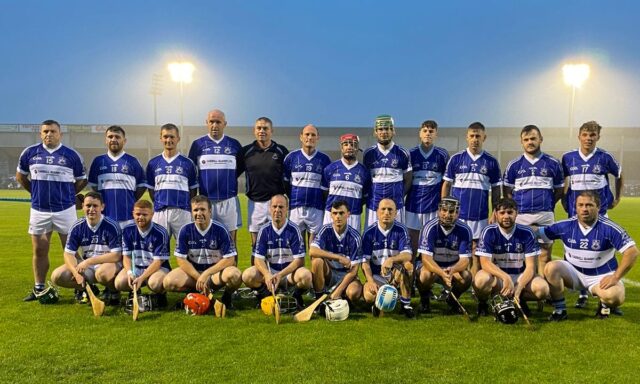 Castletown won the first adult hurling championship of 2021 this evening in the Laois GAA Centre of Excellence in Portlaoise when they got the better of Clonaslee-St Manman’s in a keenly-contested encounter.

Many of the Castletown players have a number of senior championship medals and with the spine of their team having years of experience, once they got ahead in this Junior ‘C’ final they never really looked like letting their lead slip.

It helped their cause when Clonaslee were reduced to 14 men following the sending off of Ger Dunne in the 25th minute but Castletown had a wider range of scoring threats and were relatively comfortable on the scoreboard until Clonaslee got three late points from the 59th minute on.

Barry McKelvey, Brian Ferns, Paddy Mullaney, Michael Butler, Seamus Lyons and Ger Cuddy were all present for some of the great days in the club’s history in the 1990s and 2000s and they were all central to this evening’s success.

McKelvey was a calm presence in goals, Ferns kept tabs on Clonaslee’s danger man James Young, Mullaney controlled the game from centre-back and pointed a couple of long-range frees, Butler and Cuddy saw plenty of ball and finished with a point each and Lyons was their top scorer with 0-7.

While heavy rain made playing conditions difficult early on and it took until the 12th minute for the first score (from a Seamus Lyons free), once it cleared up it was an enjoyable battle.

James Young levelled things up with a free straight away but Ciaran Dunne and Ger Cuddy responded with two points in a minute before Young and Lyons swapped frees to leave it 0-4 to 0-2 at the water break.

Lyons added another two on the resumption before Mullaney landed a ’65 to stretch their lead to five.

The game’s main talking point arrived shortly after when Ger Dunne was adjudged to have fouled Lyons as the two battled for possession. Dunne wasn’t happy with referee Anthony Costigan’s decision and his protest earned him a yellow card. When Dunne continued to air his views, Costigan gave another yellow and a red. Clonaslee were down to 14.

Lyons duly pointed the resulting free and a fine effort from play but Young got the last three points of the half to leave it 0-9 to 0-5 at the break.

Clonaslee, though, would fail to score until the 29th minute of the second half.

With Mullaney playing as the extra man and cutting out an amount of ball, Clonaslee struggled to create any scoring chances of note and Castletown extended their lead thanks to a fabulous Mullaney free from distance and Lyons’ seventh effort.

Castletown could have put the game to bed only for a great Christy Conroy save on Ciaran Dunne but Castletown were in control at the second water break with an 0-11 to 0-5 lead.

Young’s sixth free of the evening – and Clonaslee’s first of the second half – arrived with a minute of normal time remaining and though Michael Butler fired over a fine point to cancel it out, Young got further frees in the 31st and 32nd minute.

The former county star – and Laois’s all time leading scorer – then had three late free attempts on goal but all three were blocked by a well-organised Castletown defence and they held on for a four-point win.

The club now turn their attentions to a senior hurling clash with The Harps on Friday night while they are also in Junior ‘A’ action on Sunday when they take on neighbours Mountrath.