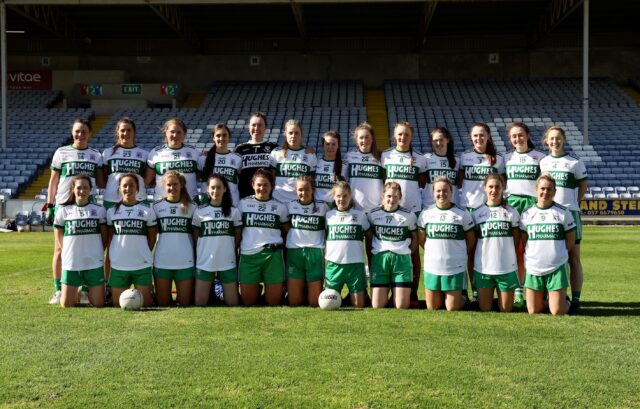 Portlaoise started strong and hit another purple patch late in the third quarter in tonight’s 2020 Leinster senior club final against Foxrock-Cabinteely, but ultimately they found the experience and depth of the Dublin champions too hot to handle in a competitive encounter at Coralstown-Kinnegad GAA club in Westmeath.

A window of opportunity was opened for the first-time Laois winners when Foxrock-Cabinteely elected to start without their four players that competed in last Sunday’s All-Ireland finals at Croke Park, while captain Amy Connolly was also absent due to a long-term injury and defender Aedín Murray was away.

That, combined with the transfer of Laura Nerney from Foxrock-Cabinteely to Portlaoise (as this was a 2020 fixture, the Laois captain was ineligible to line out for Portlaoise tonight) meant that just eight players from their starting 15 in the Dublin senior final against Kilmacud Crokes also started tonight.

In the early stages, it looked like the youthful underdogs might take advantage. Both sides failed to get scores on the board early, but Foxrock-Cabinteely were missing chances, while some intense tackling on the Portlaoise side kept things competitive.

Alison Taylor forced a goal over the line from close range, Aisling Kehoe followed up with a point, and thanks to some strong defending and some butchered Foxrock-Cabinteely chances, that was the only scoring in the first quarter.

Immediately, the Dublin club sent for help in the form of intercounty star Sinéad Goldrick, and her presence had an instant impact.

She set up a point for Niamh Ryan, and the favourites settled into the game. Katie McNally palmed in a goal when she reacted quickest to a shot that dropped short, while Jodi Egan got the first of her eight points on the stroke of half-time with a fantastic long-range kick, making it 1-2 to 1-1 at the break.

Crucially, Foxrock-Cabinteely were dominating the Portlaoise kickout, pushing anything up to 10 or 11 players up to within 50 metres of Aoife Hyland Conlon, and this ensured that the chances kept coming.

Eight wides in the first half meant the game was still in the balance, but the ten minutes after half-time were dominated by Foxrock-Cabinteely, who scored seven points on the spin. Jodi Egan started to find the target from distance consistently, which in turn forced Portlaoise to push up higher to defend, and space began to open up.

There was a mini revival when Kehoe and Shauna Jackson backed up Fiona Dooley’s score on the run with excellent points of their own, but another Egan score before the water break killed that momentum somewhat.

To their credit, Portlaoise kept pushing out to the end and got reward for their efforts when Rebecca Reddin, who had been outstanding all night, was fouled and Shaunagh Jackson made no mistake with a perfectly struck penalty.

Not enough to transform the result, but enough to give the team and management real hope that the gap between them and one of the leading club teams in Ireland is small enough to bridge over the next few years.