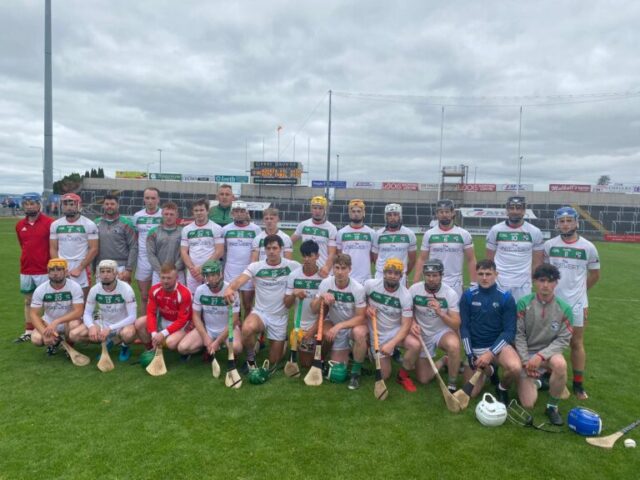 Rathdowney-Errill are top of Group B with one round to play following a five point win over Abbeyleix this afternoon.

The game was decided in the final ten minutes where the victors outscored Abbeyleix by 1-7 to 0-2 ton win by five in the end.

While manager Shane Keegan will no doubt be delighted to get minutes into Mark Kavanagh and Eric Killeen following long injury lay offs, he will be sweating on the fitness of key forward Ross King.

He suffered what looked like a dislocated shoulder and left the field to head to hospital. He will certainly miss the Borris-Kilcotton game in two weeks time – the outcome of which will decides who goes to the semi finals and who is off to the quarter finals.

All is not lost for Abbeyleix either. A draw against Camross in two weeks time will claim a quarter final place but a loss will send them to a relegation playoff.

The first quarter was very tight with just a point separating the sides by the end of it.

Shane Dollard, Darren King, Dylan Carroll, James Ryan, Brandon McGinley and Ross King were all on the scoreboard for Rathdowney-Errill in that period.

Ross King actually tested Enda Rowland in the Abbeyleix goals on two occasions but the Laois keeper was able to match him.

Abbeyleix were competitive though as Aaron Brennan, Colm Walsh, Rowland and Fionan Mahony all pointed to leave them behind by one at the water break – 0-6 to 0-5.

But Rathdowney-Errill got on top in the third quarter to take a five point lead by half time.

Shane Madden, Paddy Purcell and Thep Fitzpatrick joined the scorers but they were dealt a blow after 24 minutes when the influential Ross King was forced off with what looked like a broken collar bone.

Abbeyleix got the final score of the half through Aaron Brennan but Rathdowney-Errill took a 0-13 to 0-8 advantage to the interval.

Abbeyleix cut that to two by the 40th minute as they held Rathdowney-Errill scoreless and Ciaran Byrne (2) plus Brennan scored down the other end.

Rathdowney-Errill were wasteful in this period but sub Mark Kavanagh did force a great save out of Enda Rowland.

Dylan Carroll attempted to settle Rathdowney-Errill with a free but Abbeyleix were in the ascendancy as Aaron Brennan added two more and Enda Rowland stroked over a free to level the game.

But with the final puck of the quarter, Jack Kelly popped up from wing back to leave Rathdowney-Errill 0-15 to 0-14 ahead at the second water break.

Aaron Brennan levelled it up on the resumption but then a controversial moment resulted in Rathdowney-Errill grabbing a goal.

Abbeyleix centre back Cillian McEvoy thought he should’ve had a line ball but it went Rathdowney-Errill’s way and as it so often does after a controversial decision, a goal came off it.

The line ball was worked inside for Paddy Purcell to score. Jack Kelly swung over two points and all of a sudden the gap was six.

Abbeyleix responded through Aaron Brennan and sub Stephen Thompson but the goal was the killer for them.

They did get one near the end through sub Rory McEvoy but it was merely a consolation as they now face Camross in two weeks time with a quarter final and relegation final place at stake.