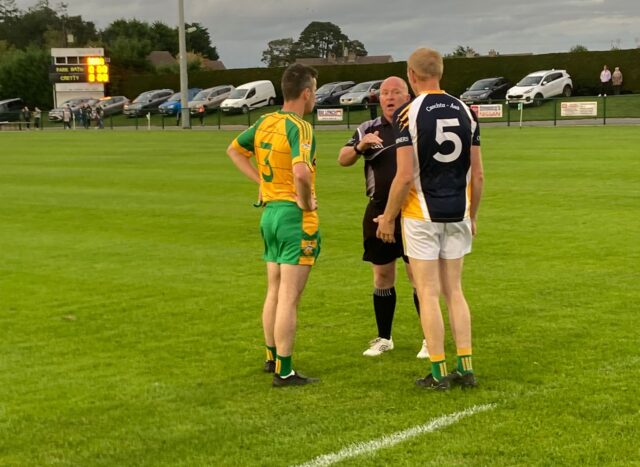 Back in June Park-Ratheniska scraped over the line to finally win the delayed 2020 Laois Junior ‘A’ football final against Portlaoise.

The win came after a nervy performance but it finally brought an end to their stay in the junior championship, one that stretched back six years and had seen them fall at the semi-final or final stage every year since.

But they’ve really hit the ground running in this year’s intermediate championship and booked their place in the semi-final thanks to a stunning 15-point win over last year’s beaten finalists Crettyard in Stradbally.

This incredible performance and 3-16 to 0-10 win comes after a similar thumping of Timahoe a couple of weeks ago. This performance was even better than that one and it’s not stretching it to say the football they’re currently playing would be good enough to beat a number of the senior teams.

Kieran Kelly has them flying it, looking really sharp, playing a great style of football and having a number of really dangerous forwards.

They also dealt brilliantly with the threat of Evan O’Carroll, keeping him to 0-6 and cutting off the supply from out the field.

Though they played against the wind in the opening half, Park were 2-7 to 0-6 up at half time, their goals coming from Kieran Delaney and James Connolly.

They had trailed 0-3 to 0-2 at the first water break, with O’Carroll kicking two of those early Crettyard points and Cormac Murphy adding another from distance.

But having struggling defensively in their opening round win over The Rock, Crettyard changed the make-up of their defence and brought Michael Jordan back to play as a sweeper. They also went with an amount of short kickouts and one of them went badly wrong and allowed the impressive Brian Dunne set up Delaney for the game’s first goal.

That had come after Park had kicked four points in a row after the water break, two from young midfielder Simon Fingleton and one apiece from James Connolly and the ever hard-working Bryan Flanagan.

Their earlier points had been off the boot of Richie Hitchcock and Brian Dunne, who shipped a number of heavy challenges before clipping over a delightful score.

A Niall Purcell point briefly stemmed the tide after Delaney’s goal but it was no length before Park had the ball in the net again, Connolly finishing smartly this time after a good ball from Jimmy Langton.

An O’Carroll free and a late point from first-half sub Cristoir Maher left it 2-7 to 0-6 at the break.

While O’Carroll was always well Crettyard’s main scoring threat, Mark Delaney contained him well and Josh Mulhall also did well playing in front of him until he got injured but Brian Flanagan slotted seamlessly in and Park kept the chances to a minimum.

And Park put the game to bed early in the second half with Kieran Delaney blasting over first before Brian Dunne buried a brilliant goal after a direct run.

There was never any mystery in it after that. O’Carroll did kick a fabulous free but Connolly, Flanagan and Sean Tynan got three points in a row for Park and at the second water break they were 3-11 to 0-7 clear.

The final quarter was niggly and threatened to boil over on a couple of occasions but despite two points from O’Carroll and one from Pa Brennan, Park continued to add on scores.

Park now go forward to a semi-final in four weeks time while Crettyard go to a quarter-final where they’ll play either Timahoe or the winners of Arles-Kilcruise-Portlaoise.

They’ve plenty of improving too after this but Park look the real deal having scored seven goals in two games with an average winning margin of 16 points.

It should get tougher from here on but right now they are the team to beat.

Winning two championships in the same year is now well within their radar.