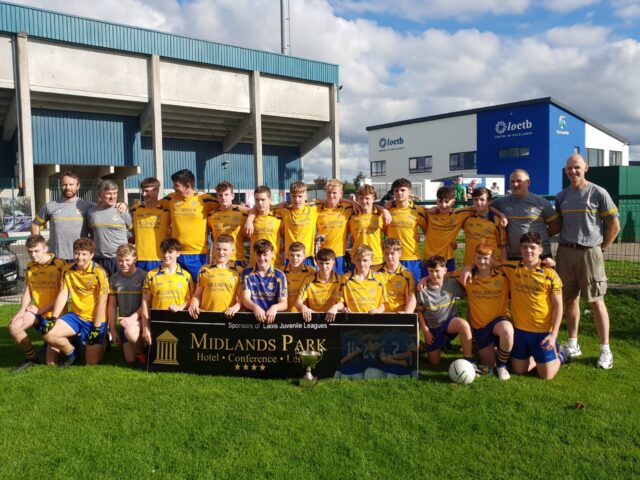 A scintillating second half display saw St Joseph’s sweep to their second successive U-15 ‘A’ football championship title in the Centre of Excellence this afternoon.

The Kellyville outfit were pushed hard by Stradbally Parish Gaels for 45 minutes but they blew them away in the final stages to win by 18 points in the end.

Just as he was in last year’s final, which was only played a few months ago as it was delayed by Covid-19, Darragh Farrell was simply sensational.

He scored 2-7 and set up two further goals for Conor Murphy as the Gaels just could not contain him.

Stradbally Parish Gaels started the game well but saw first half goal chances for Fionn McEvoy-Mullally, Cathal Buggie and Oran Darcy all thwarted by St Joseph’s Seamus Lynch – and those saves would cost the Gaels in the end.

The sides were level at 0-3 apiece at the first water break as Farrell and Fionn McEvoy-Mullally traded a brace with David Donohue and Tadhg Dineen also swapped scores.

But St Joseph’s got on top after that as another Farrell brace plus a score from Sam Lynch left them 0-6 to 0-3 ahead at half time.

Farrell and Ben Maher extended the lead on the resumption but the Gaels rallied after that as Cathal Buggie, David Donohue and Oran Darcy cut the deficit to two after 40 minutes.

The game changed on the stroke of the water break as St Joseph’s launched an attack involving four players that ended with Conor Murphy sweeping the ball to the net.

That left St Joseph’s 1-9 to 0-6 ahead at the second water break and they put the game to bed after that.

Stradbally Parish Gaels kicked two late points through Adam Murray and Fionn McEvoy-Mullally but it was glory for St Joseph’s.