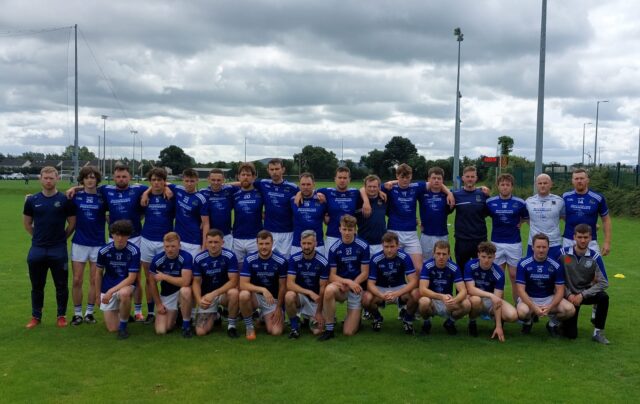 Mountmellick have joined Park-Ratheniska in the IFC semi finals following a routine 27 point win over O’Dempsey’s in McCann Park this evening.

Gordon Lalor’s charges didn’t have to get out of second gear as they easily batted away the challenge of the second string of Killenard.

The result means that O’Dempsey’s now head for the quarter finals where they will play either Timahoe or Crettyard.

It was actually O’Dempsey’s who took the lead as straight from the throw in, Ciaran McManus got through for a goal.

Colm Coss, who ended the game with 1-11, steadied Mountmellick with three quick fire points before Niall Mullen put them ahead.

And they grabbed their first goal on the stroke of the water break as Mark Dowling delicately chipped David Nicolson to leave it 1-4 to 1-0.

The game was over on the restart as Finn Culleton and John Connolly combined for a goal each with Coss landing three more points and Darren Fitzpatrick also scoring.

O’Dempsey’s tried to get back into the game through Ciaran McManus, Eoin Finlay and Liam Finlay but they trailed 3-8 to 1-3 at half time.

Eoin Finlay punched in a goal on the restart and then landed a free but Mountmellick stepped on the gas again.

Eoin George became their fifth different scorer as they led 4-12 to 2-6 at the second water break.

The excellent Finn Culleton and Colm Coss got in on the goal-scoring in the time that remained as Mountmellick eased to victory.