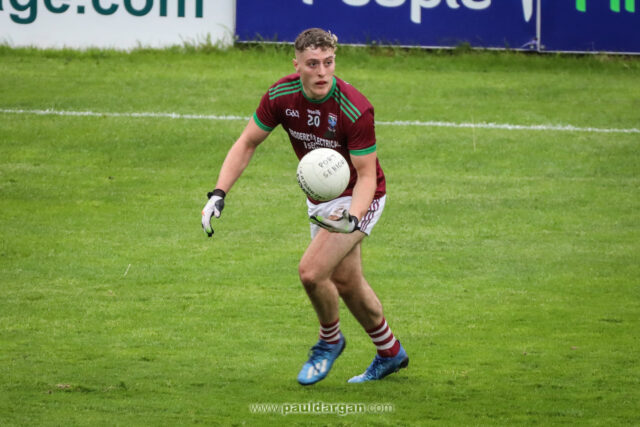 2020 Laois SFC winners Portarlington are safely through to the quarter-finals of this year’s championship following a relatively comfortable win over Courtwood in O’Moore Park this afternoon.

Courtwood – who had shocked Portlaoise in the opening round – competed with Portarlington well in the first half, but once Keith Bracken goaled with the first attack of the second half to open up a six-point lead, there was never any real mystery as to the outcome.

The result gives Port a four-week break to their quarter-final game which they will surely welcome given the short turnaround they had after winning the 2020 final.

Jake Foster opened the scoring for Port early on with a nice effort from play while the first of Colm Murphy’s scores, from a free, doubled their lead soon after.

Colm and David Murphy also pointed from play in the opening quarter but three Danny Luttrell frees meant it was only 0-4 to 0-3 at the first water break.

The champions were dealt a blow just before that break when Stuart Mulpeter was black-carded but Courtwood couldn’t make the numerical advantage count and by the time he came back on ten minutes later, Port were three points ahead after Colm Murphy (free) and Foster had been on target.

A fine left-footed point from Niall Dunne pulled one back for Courtwood but a David Murphy point, when there was a sniff of a goal chance, meant it was 0-7 to 0-4 at the break.

And Port got a crucial score within a second of the restart when Keith Bracken finished to the net from close range after a good pass from Colm Murphy.

It was always hard to see a way back for Courtwood after that and the hill got even steeper when Ronan Coffey converted a penalty.

Foster added a couple more points and Colm Murphy got one more to stretch the lead to 11 and though Courtwood hit three points in a row – from a Mathew Byron 45, Danny Luttrell and Alan Kinsella – Port finished strong.

Colm Murphy brought his tally to seven points and Foster took his to five before Collins Ugochukwu got a straight red card late on from referee Brendan Hickey and Port finished with 11 points to spare.