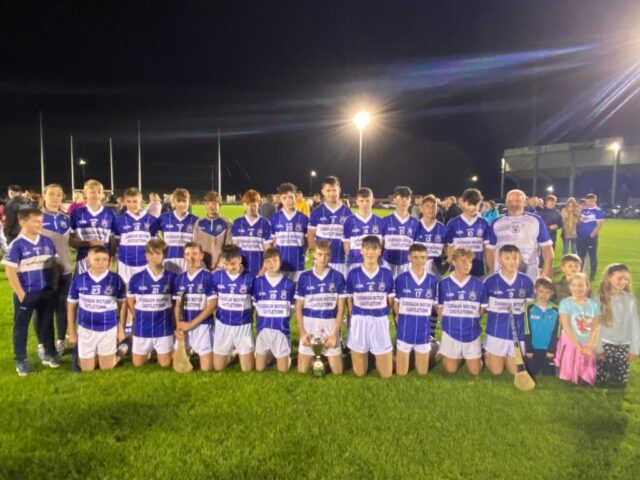 Castletown defeated Portarlington in the Feile ‘B’ hurling final tonight in the Centre of Excellence.

A first half hat trick from Tom Og Phelan gave Castletown an eleven point lead at halftime which would give them a platform to go on and claim Feile glory in style.

Portarlington won the U-15 ‘B’ championship on Saturday and defeated their opponents from that day – Clough-Ballacolla – in the semi final tonight.

Castletown were in the ‘A’ for the championship but were regraded for this competition after losing the ‘A’ Shield semi final and were worthy champions.

Castletown got off to a flying start scoring 2-2 in the opening four minutes of the game.

Ryan Peters got the game underway with a point before Tom Og Phelan set up Kyron Cuddy for Castletown’s first goal.

Tom Og Phelan then scored two goals in quick succession but Portarlington battled their way back into the game and replied with one of their own.

A long ball was played into the square which led to a scramble for possession before Finn Lyons lashed the sliotar into the back of the net.

Portarlington then reduced the deficit when they scored another goal. Edmond Bale fired the ball into the box and Ben McCann was on hand to volley it into the back of the net – 3-4 to 2-1.

Castletown finish the half strong as Tom Og Phelan raised his third green flag of the night – 4-6 to 2-1.

However, Portarlington looked tired in the second half as their weekend exploits started to show and Castletown held them scorelness.

Kyron Cuddy, Callum Peters, Ryan Peters, Killian Breen, Ryan O’Connor and Daniel Whelan all pointed for Castletown while Breen and Byron added two more goals to round off a comprehensive win over Portarlington.