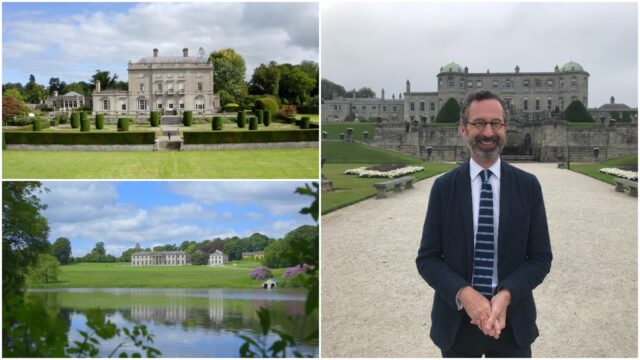 Ireland’s Historic Gardens airs on RTE One on Sunday evening – and there will be significant Laois interest.

Abbeyleix and Ballyfin are set to feature in episode one at 6.30pm while Heywood Garden will appear in episode two next week.

Ireland Historic Gardens is written and presented by author and historian Robert O’Byrne and produced and directed by David Hare.

The two hour long programmes examine the history of Ireland’s country house gardens over the last 400 years during which time garden design has reflected political and social changes taking place within the country.

In the seventeenth century, for example, the decision to plant your garden in the French or Dutch style reflected your political allegiance.

The story begins at Lismore Castle, which has the oldest continuously cultivated garden in Ireland – before this, what we recognise as gardens could only be found in friaries, monasteries and convents, all of which were closed down or destroyed during the Dissolution of the Monasteries, started by Henry VIII in the mid-sixteenth century.

Fashions in garden design changed from Italian Renaissance style (Portumna Castle), to the rigid formality of the Baroque era, exemplified by straight lines and symmetry (Kilruddery, and the Royal Hospital, Kilmainham).

In the nineteenth century, garden design moved back once more to formality and structure (Abbeyleix and Powerscourt) until, inevitably, a wilder, informal aesthetic became, and remains, popular (Mount Usher and Dereen).

Follies, glasshouses, and walled gardens all have important parts to play in the evolution of Irish garden design.

The story of Ireland’s country house gardens is also the story of the men and women who commissioned, designed, and maintained them, including the Earl of Charlemont, generations of the Acton family, and William Robinson.

Robert O’Byrne visits seventeen significant and influential gardens and meets gardeners, historians and owners, each of whom adds insight and knowledge to the fascinating story of Ireland’s country house gardens.

The former vice-president of the Irish Georgian Society also introduces viewers to Kilruddery in Co Wicklow, and Dublin’s Royal Hospital in Kilmainham, as well as the Casino at Marino.

This first programme in the brand new two-part documentary concludes with a visit to two historic gardens in County Laois – Abbeyleix, and Ballyfin.