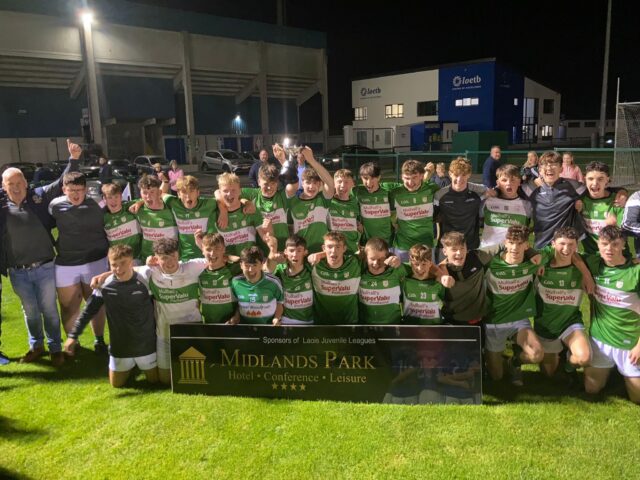 Na Fianna – a combination of Ballyfin, Mountmellick, Clonaslee and Slieve Bloom – claimed the Laois minor ‘B’ hurling title this evening in the Centre of Excellence as two late goals ensured they stunned a Park-Ratheniska/Timahoe Gaels side that had led for most of the contest.

At one stage in the second half Park-Ratheniska/Timahoe were five points up and looking good. But they could never quite pull far enough away to make it safe.

And with the door left open, Na Fianna struck in the most devastating fashion possible.

With the clock ticking towards 60 minutes, Jack Heffernan hit a free to bring his tally to 1-3 and leave just two points in it. And moments later impressive full-forward Ciaran Culliton set Dylan Kelly up for a brilliant goal. Suddenly Na Fianna were ahead.

And with their dander up, they got another goal a minute later, when Culliton got on the end of a good sideline cut from Tom Smyth and rifled home the insurance score.

Soon after Eoin Scully sounded the final whistle and there was boisterous celebrations both then and when Laois juvenile GAA chairman Alan Langton presented the trophy to winning captain Rory Culliton.

Park-Ratheniska/Timahoe Gaels – who had two county minors in Jonah Kelly and Conor Fitzpatrick – and encompassed players from St Joseph’s and Crettyard to make it a ‘Gaels’ set up had looked the most likely winners for long stages.

A nice Adam Ramsbottom point put them two clear but Na Fianna soon had their first goal when Culliton set up Jack Heffernan.

His powerful effort was brilliantly stopped by Oisin Ramsbottom but it had enough force in it to get over the line.

Roche-Duff and Tom Smyth swapped points but Park-Ratheniska/Timahoe were ahead at the break, 2-4 to 1-5, after a well-taken goal from Cormac Murphy.

Murphy put his side three up early in the second half and Conor Fitzpatrick added a free, which was cancelled out by Culliton at the other end but two Fitzpatrick frees in a row had Park-Ratheniska/Timahoe five clear.

But Na Fianna had no intention of caving in. Instead Jack Heffernan hit two more frees and there was just three in it, 2-8 to 1-8, at the break.

Conor Fitzpatrick pointed from play on the restart but a free and a ’65 from Tom Smyth meant it was still a live contest heading into the final ten minutes.

Fitzpatrick replied again, to take his tally to 1-6, but it was to be their last score.

First Heffernan brought it back to two and then Kelly got what was to be the winning score.

And after setting up two goals, Ciaran Culliton got one for himself too.

What a way for a county final to finish up.

Huge disappointment for Park-Ratheniska/Timahoe – but a job well done by Na Fianna.