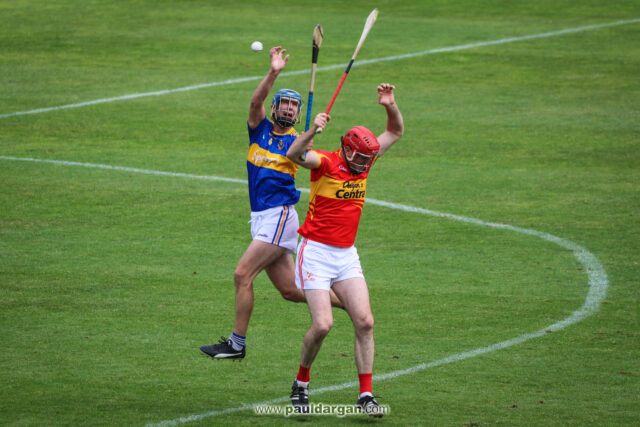 The group stages of the Laois hurling championships come to a conclusion this weekend with games in the top three grades all down for decision.

With three teams to come out of the four-team groups in both senior and premier intermediate, there is still nobody knocked out – but the fixtures have worked relatively well and there is a straight shootout in both groups where the winner goes through and the loser is out.

Here we take a look at the various permutations ahead of the action.

After two rounds of games, there is nobody out of contention yet in the Laois senior hurling championship though Rathdowney-Errill, Borris-Kilcotton, Clough-Ballacolla and Castletown are all definitely through to the knockout stages.

They are all playing for the right to go straight through to the semi-final and avoid having to take the longer quarter-final route.

At the other end of the scale, Camross, Abbeyleix, The Harps and Rosenallis can reach a quarter-final – or end up in the relegation final.

Abbeyleix v Camross (Group B)
In O’Moore Park on Thursday at 7.30pm

Abbeyleix have one point after two games having drawn with Borris-Kilcotton in the opening round but lost to Rathdowney-Errill the last day out.

It means a draw would be enough to send Abbeyleix through while Camross must win or they will be in the relegation decider.

Borris-Kilcotton v Rathdowney-Errill (Group B)
In O’Moore Park on Friday at 7.45pm

Both teams are safely through with Rathdowney-Errill bringing a 100% record and four points into this game while Borris-Kilcotton are on three.

A draw will be enough to ensure Rathdowney-Errill top the group and go to a semi-final while Borris-Kilcotton need to win or they will have a quarter-final in two weeks time.

Clough-Ballacolla v Castletown (Group A)
In O’Moore Park on Saturday at 5.30pm

With both teams having full points with two wins from two, it’s straight forward enough here. The winner tops the group and goes into a semi-final, the loser takes second place and takes on third in the opposite group (Camross or Abbeyleix).

If it’s a draw, Clough-Ballacolla’s greater scoring difference would be enough for them to finish top.

Rosenallis v The Harps (Group A)
In O’Moore Park on Saturday at 5.30pm

Simple enough here. The winner goes through to a quarter-final, the loser goes in the relegation final.

If it’s a draw, then The Harps’ scoring difference will suffice for them.

Like the senior, there is nobody knocked out yet though only Portlaoise are assured of going through.

In Group A, all four teams, having won once and lost once each, have a chance of both topping the group and finishing bottom.

The winners will definitely go through with the losers needing a favour in the other game to also make it out of the group as the head-to-head rule will be used.

If Ballinakill win, then Slieve Bloom will need Rathdowney-Errill to beat Ballyfin as Slieve Bloom would finish ahead of Ballyfin having won the fixture between the two last week.

If Slieve Bloom win, then Ballinakill will be hoping for Ballyfin to win to allow them finish ahead of Rathdowney-Errill.

It’s confusing but the winners are through and so will one of the losers.

No matter what happens Portlaoise are through having won their two games to date.

But they need a win or a draw to be sure of top spot and a semi-final.

Camross and Clonaslee both have a win each so another win this weekend, or a draw, would also guarantee them going through.

A Colt-Shanahoe win may not even be enough as they would also need Clonaslee to beat or draw with Portlaoise – or to win by such a margin that they’d go through on scoring difference even if Portlaoise win and three teams finish on two points.

This competition only sends the top two teams through to the semi-finals and all four places are already decided.

All they are playing for now is finishing position and who tops the group.

The Harps play Trumera in one group to decide who finishes first while Borris-Kilcotton and Clough-Ballacolla meet in the other to decide the same honour.

It’s actually more interesting at the other end where the bottom teams are playing each other and the losers of those fixtures will play off in the relegation final.

On one side, Mountmellick play Mountrath and on the other Clonad host Park-Ratheniska/Timahoe.