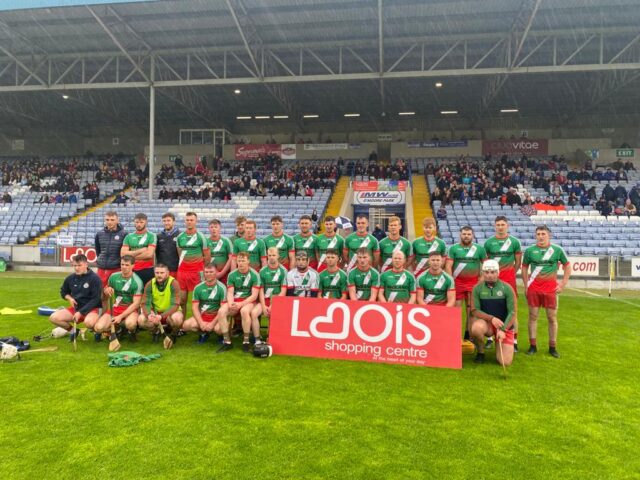 Despite a slow start to the championship when they had to come from behind to draw with Abbeyleix, Borris-Kilcotton go through to the semi-finals of this year’s Laois SHC as group winners following tonight’s narrow win over Rathdowney-Errill in O’Moore Park.

They hit 18 wides over the course of the game – but hit six points in a row in a powerful final quarter, as well as getting a goal from Emmet Jones, to record a good win over an admittedly understrength Rathdowney-Errill side.

With both teams already through, this didn’t have the same importance as it would, say, in four weeks time if they were to meet. It was an exciting second half and Borris-Kilcotton did well to win it – but expect plenty more bite in the coming weeks.

Rathdowney-Errill were down Mark Kavanagh, Ross King, Joe Fitzpatrick and Paddy McCane but did welcome back Eric Killeen for his first start of the year.

For the most part it was an honest enough battle throughout.

The sides were level 0-5 apiece at the first water break. PJ Scully accounted for three of those early Borris-Kilcotton points with Joe Campion and Aaron Dunphy getting one each from play.

For Rathdowney-Errill, Dylan Carroll – on the frees in the absence of Mark Kavanagh and Ross King – pointed twice with Brandon McGinley, Shane Dollard and Darren King all on target too.

There was little to separate them throughout the second quarter either with McGinley and Jack Kelly pointing though Colm Stapleton hit back quickly with two from play.

A couple of Carroll frees were cancelled out by two from play from Aaron Dunphy though an excellent Paddy Purcell score from the the stand nudged Rathdowney-Errill ahead before a Scully free left the sides level 0-10 each at the break.

Neil Foyle pushed Borris-Kilcotton one up early in the second half but a fortuituous Liam O’Connell goal from a long-range free gave Rathdowney-Errill a vital advantage.

Borris-Kilcotton hit an amount of good chances wide in the second half and Carroll, Jack Kelly and David Poynton all point and Rathdowney-Errill led 1-13 to 0-13 at the second water break.

Carroll and Stephen Dunphy traded early points but Borris-Kilcotton, despite hitting 12 second-half wides and 18 in total, finally made their dominance count.

Sub Emmet Jones got their goal when he pulled on a long ball into the square and while Carroll and McCane replied immediately with points, Borris-Kilcotton hit six points in a row – from Noah Quinlan, Stephen Dunphy and two each from Aaron Dunphy and Scully – to be four up going into injury time.

Liam O’Connell goaled from a penalty late on but Borris-Kilcotton held on.

They now have a four-week break to a semi-final. Rathdowney-Errill will be back in action in two weeks in the quarter-final when they play the winners of The Harps and Rosenallis, who meet tomorrow.