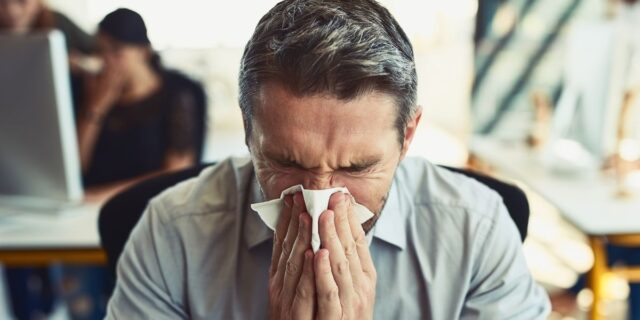 Cold and flu season has started to make its unwanted presence familiar again.

Last year, many of us were in lockdown for long periods and so may have avoided the usual sniffles. The average adult can expect to catch two to four colds annually whilst young children can get as many as eight to twelve until their youthful immune systems get chance to build up.

With most of us mingling again, whether for work or socially, we’re likely to be laid low with a bunged or runny nose and other symptoms at least a couple of times over autumn, winter and spring.

Experts actually predict we will be more prone to this form of illness this year because, for a lot of us, our immunity has basically had more than twelve months off and isn’t quite in shape yet.

So what can we do to cope? Personally, I swear by Vicks First Defence. I used to get a lot of bad colds, in other words, what is known to the stronger half of the population as “man flu”.

For a good few years now, at the first sign of a scratchy throat, my usual warning signal that a dose is on the way, I’ve used this nasal spray and, apart from an unlucky couple of occasions, have managed to avoid the actual cold part of the process.

A word of warning though, try not to breathe in too deeply for a few minutes after using Vicks First Defence. To say it burns is an understatement!

We can also do things like ensuring we are eating healthily, including getting enough vitamin C, and exercising.

Sleep is important too and, although it’s probably not what we want to hear come December and January, avoiding overheating our homes helps too. Stress is something which it is helpful to avoid at all times though particularly during cold and flu season.

Most people’s lives don’t allow for it to be cut out completely but there are things we can do to deal with it better such as meditation. People who are more vulnerable may also choose to get the flu vaccine.

What about when we actually contract a cold or flu? A lot of people rave about echinacea. It’s supposed to reduce symptoms and shorten the length of illness significantly.

It’s a natural herb and can be bought in chemists. Always check with your pharmacist but it can usually be taken with over-the-counter cold remedies such as Lemsip and Beecham’s.

Particularly this year, we should also be mindful that many of symptoms of colds and flus are shared with covid.

Some are not, for example sneezing is unique to a cold, but others are, a cough is one which is symptomatic of all three.

Whilst we shouldn’t panic unnecessarily, if you do think you have more than a cold, then at the very least, contacting your doctor to be on the safe side is a good idea.