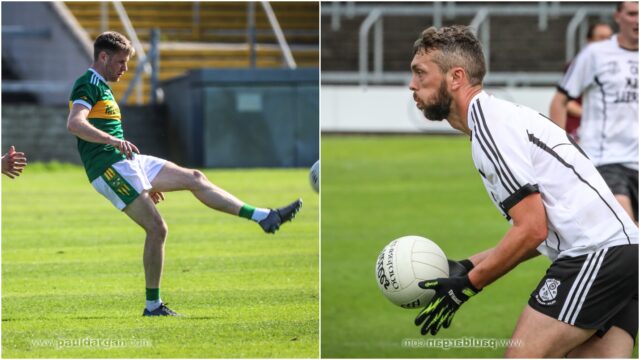 Arles-Killeen’s status as senior club is safe for 2022 after the made the most of a fast start to comfortably get the better of their neighbours Ballylinan in this relegation semi-final in O’Moore Park this evening.

Killeen had been embroiled in controversy following the melee that occurred at the end of their second round loss to Killeshin two weeks ago.

A handful of players had been hit with proposed two-match suspensions in the aftermath of that – but as the relegation games are deemed a new competition, suspensions in the regular championship don’t apply. In any case the bans were overturned and as things stand won’t be applied next year either.

But they controlled this game from start to finish and had 13 points to spare in the end. Ballylinan now go forward to a relegation final against The Heath in two weeks time.

Ballylinan, who were without injured county men Gary Walsh and Seamus Lacey, have been coughing up goal chances all season and that trend continued from the off here.

With their first meaningful attack, Killeen had a goal, Sean O’Shea winning a dangerous delivery from Donie Kingston and rounding Tom Wright to shoot into an empty net.

And by the time there was three minutes on the clock they had a second, Donie Kingston converting a penalty after he was fouled himself. They had another goal chance moments later but Donie Kingston’s shot was blocked after being set up by his brother Paul.

But they added points from Paul and the impressive Colin Dunne before Cathail Dunne got Ballylinan off the mark with a free. By the water break it was 2-3 to 0-1.

Ballylinan had plenty of possession in the second quarter but they could only add three points – all from Cathail Dunne – as Donie Brennan and Paul Kingston meant there was still seven in it at the break, 2-5 to 0-4.

Given the hill they had to climb, Ballylinan needed to take every chance that came their way. Instead they kicked two bad wides and dropped one short in the first couple of minutes.

And when a short kickout went badly wrong, Killeen gladly took advantage with Colin Dunne goaling after Donie Kingston had initially been denied. Donie Kingston added a point straight away and Paul added another. Suddenly there was 11 points in it. Game over.

Cathail Dunne and Larry Kealy replied for Ballylinan but it was 3-7 to 0-6 at the second water break.

It got worse for Ballylinan in the final quarter. Paul Kingston rattled home a goal and Sean O’Shea added a point as they stretched ever further clear

Larry Kealy and Dunne got a couple of consolation points for Ballylinan but the last score of the game went to Jason Enright, one of Killeen’s greatest servants.

Job done for 2021. For Ballylinan, they face another battle in a fortnight’s time to stay in the senior grade they’ve been in since 1974.