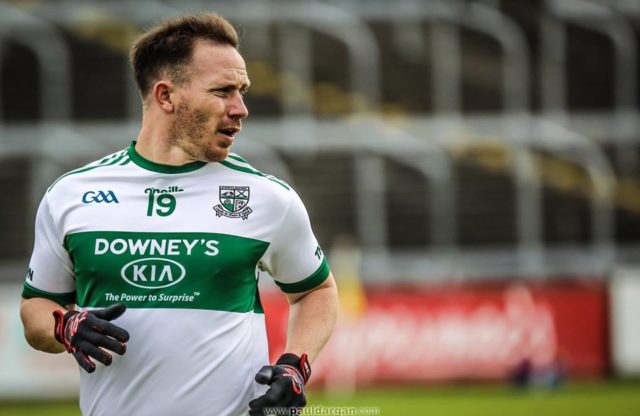 The latest chapter of the Portlaoise-St Joseph’s rivalry played out in O’Moore Park this evening – but it was a familiar result as The Town did enough to advance to a quarter-final in two weeks time.

They had to battle to the finish and overcome a two-point deficit at the second water break but a strong final quarter was enough to drag them through. St Joseph’s latest brave effort to beat Portlaoise fell short again.

Kevin Fitzpatrick’s side aren’t as daunting a prospect as they were in previous years but they’re improving as this championship goes on and will make life difficult for anyone from here on in.

Portlaoise started with intent with Damon Larkin pointing from play and Paul Cahillane with a free. Brian Daly hit back for Joseph’s though Cahillane had Portlaoise 0-3 to 0-1 up after five minutes with a nice point from play.

Dylan Doyle responded for Joseph’s but two from Cahillane, one a free and other off his right, had them three up before Jason Campion clipped one over to leave two in it at the water break, 0-5 to 0-3.

Cahillane added another free on the resumption though Joseph’s had it back to one thanks to points from Michael Keogh and a James Kelly 45, that coming after a fine block from Gary Saunders on Dylan Doyle.

Two nice points from Conor Boyle and another from Damon Larkin had Portlaoise four clear but it was back to three at half time, 0-9 to 0-6, following a nice effort from Matthew Campion.

A Ben Brennan point nudged Portlaoise further ahead early in the second half but the game got the goal it needed in the 39th minute when Michael Keogh hit the net after a powerful run from James Kelly created the initial chance.

Could Joseph’s push on? They could. But would it be enough?

Though there was a hold up after that first goal as Clifford Ward dealt with a bit of a shemozzle, Joseph’s eventually won the next kickout, powered on and sub Josh O’Brien was fouled. Penalty. Michael O’Connell saved Brian Daly’s spot kick but Daly had the simple job of tapping in the rebound.

There was another long stoppage shortly after with Jason Campion having to be bandaged up but Joseph’s had a 2-6 to 0-10 lead at the water break. That head injury forced Campion off and his loss was a big one for St Joseph’s.

Portlaoise goaled in the 50th minute when a long-range free from Ronan McEvoy dropped short but Joseph’s didn’t deal with the danger and Damon Larkin managed to pull on the ball on the ground and finish past Aaron Cooney.

Ricky Maher and McEvoy added points for Portlaoise and though Gary Saunders was black-carded late on and Portlaoise finished with 14, they had enough done at that stage.

They go on. Joseph’s go out.