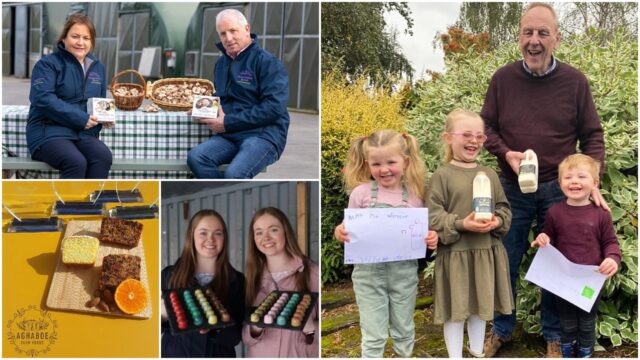 Now in its 14th year, Blas na hEireann, The Irish Food Awards, is the biggest competition for quality Irish produce on the island of Ireland.

Products from every county in Ireland were entered into the 2021 competition to win Gold, Silver and Bronze Awards in a broad range of food and drink categories.

Durrow twins Kate and Ruth O’Hara are the brains behind Temptation Patisserie and they scooped five prizes.

The chocolatiers won the Best Artisan Product 2021 for their Sea Salt Caramel Bar.

Temptation Pâtisserie were also winners of this year’s Blas na hÉireann Best Start Up award. While they also won Gold, Silver and Best in County awards.

Kate and Ruth recently took part in our popular Up & Coming segment where they explained their story thus far.

Aghaboe Farm Foods, owned by Niamh Maher and based near the Pike of Rushall, is an artisan bakery that specialises in traditional baking but with modern flavour combinations.

The Village Dairy was another of the Laois winners and it took home two gold medals – one for its Jersey Milk and the other for its Organic Jersey Milk.

The Killeshin based company, managed by Noel Barcoe, local family-run dairy that was founded in 2014 and produces a variety of craft milk and cream products.

They produce handcrafted preserves and jams from Ballypickas and are owned by Clive Gee.

The fifth successful Laois producer is Garryhinch Mushrooms who won in the Chef’s Larder section.

Garryhinch Mushrooms is run by Joe and Dolores Gorman and their Organic farm is located on the banks of the river Barrow on the borders of counties Laois and Offaly.

Blas na hÉireann Chairperson Artie Clifford said: “These are the 14th annual Blas na hÉireann awards and despite the very challenging situation, I am delighted to report a record entry level from producers right across the island.

“This large increase in entries has raised the bar across all categories, allowing us to introduce new products and producers to the buyers and press with whom we work, which is really exciting.

“Congratulations to all the winners and to every producer who participated.

“It is always such a rewarding experience to see the wealth of exceptional foods being produced on the island of Ireland, and this has been the best year yet.”