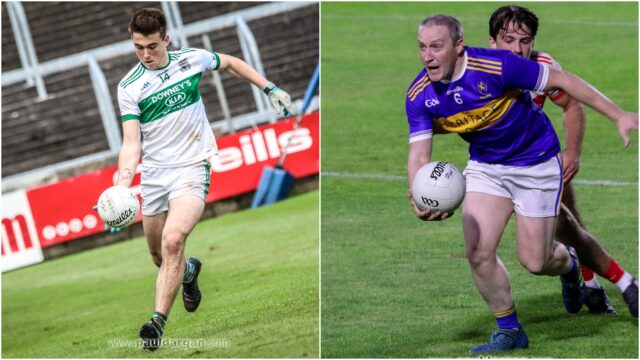 The strength of Portlaoise’s bench was the difference as they came from behind to defeat O’Dempsey’s in extra time this evening.

1-9 of Portlaoise’s tally came from their substitutes as they got the better of Eoin Kearns’ charges in what was a war of attrition.

They now join Portarlington and Ballyroan-Abbey in the last four – with the winners of Tuesday’s game between Emo and Graiguecullen set to join them next week.

Portlaoise grabbed the game’s first two scores via Kieran Lillis and Damon Larkin but then followed that with three wides.

O’Dempsey’s struggled to attack in the opening stages but they found their grove as Peter O’Leary and Mark Barry drew them level before the latter had a snapshot that went through keeper Michael O’Connell’s legs and wide.

Conor Boyle replied down the other end and Portlaoise led 0-3 to 0-2 at the first water break.

Two wonderful points from Mark Barry on the resumption put O’Dempsey’s into the lead for the first time.

Portlaoise were playing very defensively now meaning that space was at a premium – but Matthew Finlay found some after 25 minutes to put two between them.

Daithi Howlin added another and then really should have had a goal near the end of the half when Matthew Finlay flicked the ball to him but Michael O’Connell made a stunning save – a save that would prove very important in the end.

Nevertheless, Portlaoise ended the second quarter without a score and O’Dempsey’s took a 0-6 to 0-3 lead at half time.

The Killenard outfit made it five points in a row on the restart when the excellent Mark Barry beat two players and curled over his fourth from in front of the terrace.

Portlaoise went 22 minutes without a score but that finally ended in the 35th minute when sub Ricky Maher curled one over after good work by Jason Maher.

Paul Cahillane reduced the gap further with a free but Johnny Kelly made it 0-8 to 0-5 after 40 minutes.

Both sides then hit a succession of wides to leave three between them at the second water break.

Benny Carroll reduced the arrears on the resumption of play and then Ricky Maher kicked a free after Damon Larkin was fouled to make it 0-8 to 0-7 after 50 minutes.

Portlaoise drew level after 55 minutes through Maher but were then reduced to 14 men for the time that remained as Ciaran McEvoy was shown a black card.

But they took the lead in the final minute through Maher – only for Mark Barry’s fifth point to draw it as we headed for two minutes of injury time.

Ronan McEvoy looked like he had won it for Portlaoise but in the final second, Ben Dempsey was adjudged to have handled the ball on the ground and Barry converted the free to send us to extra time – 0-10 apiece.

Ronan McEvoy kicked Portlaoise back in front at the start of the first period of extra time – with John Kavanagh adding another from a free soon after.

And the lead was five after 66 minutes when Damon Larkin turned over Robbie Kehoe on the end line and the ball eventually came to Kavanagh who slipped it into the net.

The game looked over now but from nowhere, O’Dempsey’s broke up field and Mark Barry picked out Johnny Kelly who sidestepped Michael O’Connell and slid the ball to the net.

But Portlaoise responded well as Benny Carroll and Kieran Lillis pointed to leave them 1-14 to 1-10 ahead at half time in extra time.

Ben Coen cut the gap on the restart and then Matthew Finlay made it a two point game with five minutes to play – just after Benny Carroll had wasted a great chance to kill the game by blazing a goal opportunity wide.

But a Ciaran McEvoy fisted effort left three in it as two minutes of injury time were signalled.

O’Dempsey’s needed a goal to force penalties but that didn’t come and Portlaoise held on.