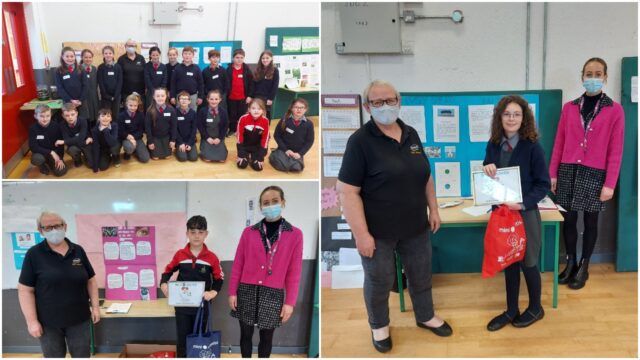 After a year out due to Covid-19, the Intel Mini Scientist was back with a bang this year at Timahoe NS.

‘The Air We Breathe’ by Gráinne Ramsbottom was this year’s big winner and Gráinne will now go on to represent the school at national level.

The annual showcase which took place on Wednesday October 20 was another resounding success as the young scientists of Timahoe showcased their experiments, investigations and research.

The event is a huge part of the Timahoe NS Calendar due to the enormous success enjoyed by the school in recent years.

The school has won two All-Ireland finals as well as the runner up prize for the past four years.

Gráinne’s project was about air quality with a focus on particulate matter, a very harmful substance if inhaled.

This substance is a combination of solid and liquid particles suspended in the air such as dust, pollen, soot, smoke and liquid droplets.

Gráinne hopes to develop a personal smart watch monitor to alert people in real time to areas where air quality is poor.

The runners up prizes went to ‘Dung Beetles’ by Thomas Miller which looked at the positive impact of dung beetles on farms and ‘Taste the Mutans’ by Sean Hogan O’Donnell which was a study of the effect sugar and bacteria has on teeth.

The standard of science project on view was incredibly high and reflected the enthusiasm for science that exists within the school. 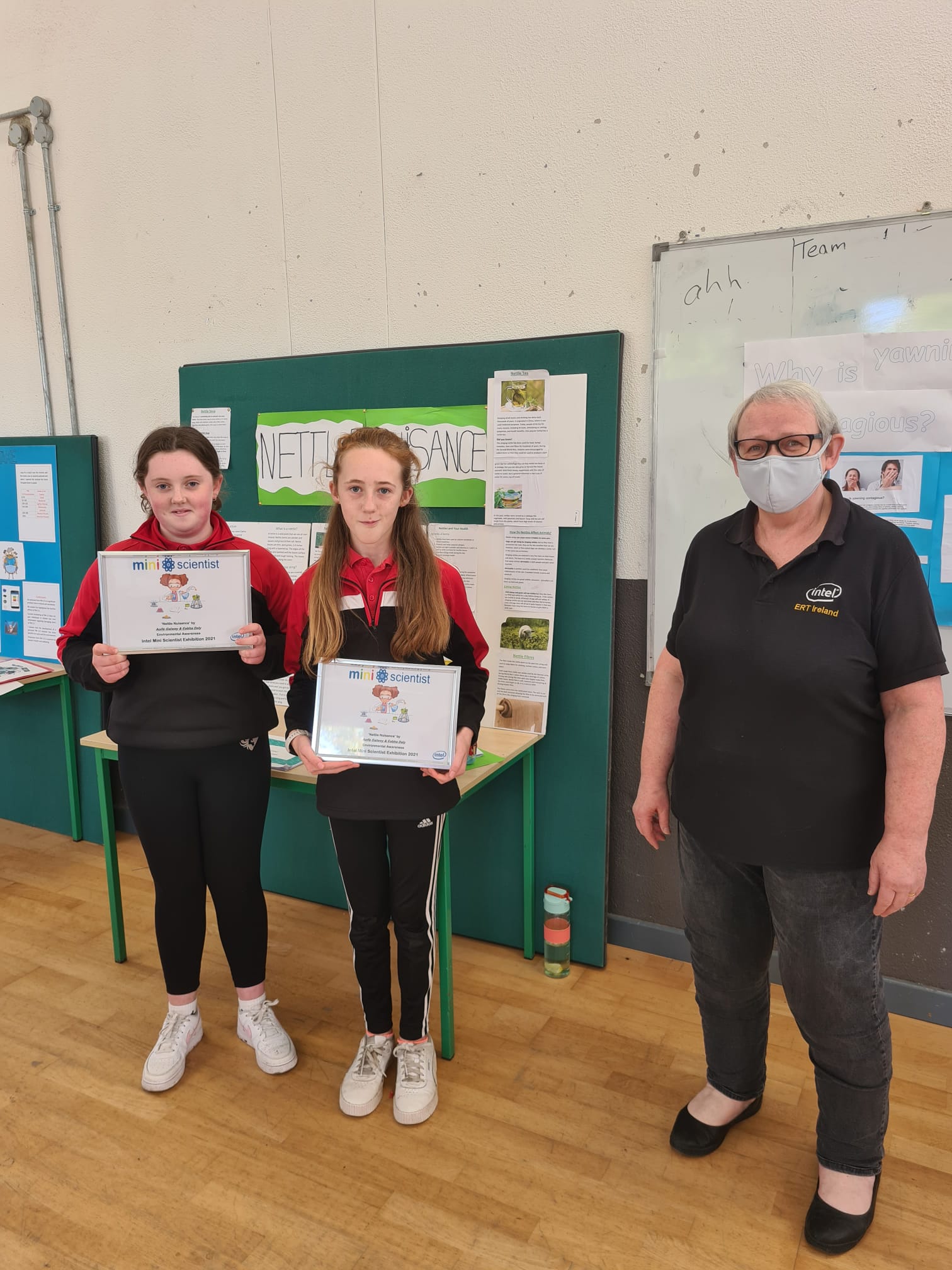 There were a host of other category prize winners but the prize winners were only part of the story as all the children produced amazing work. 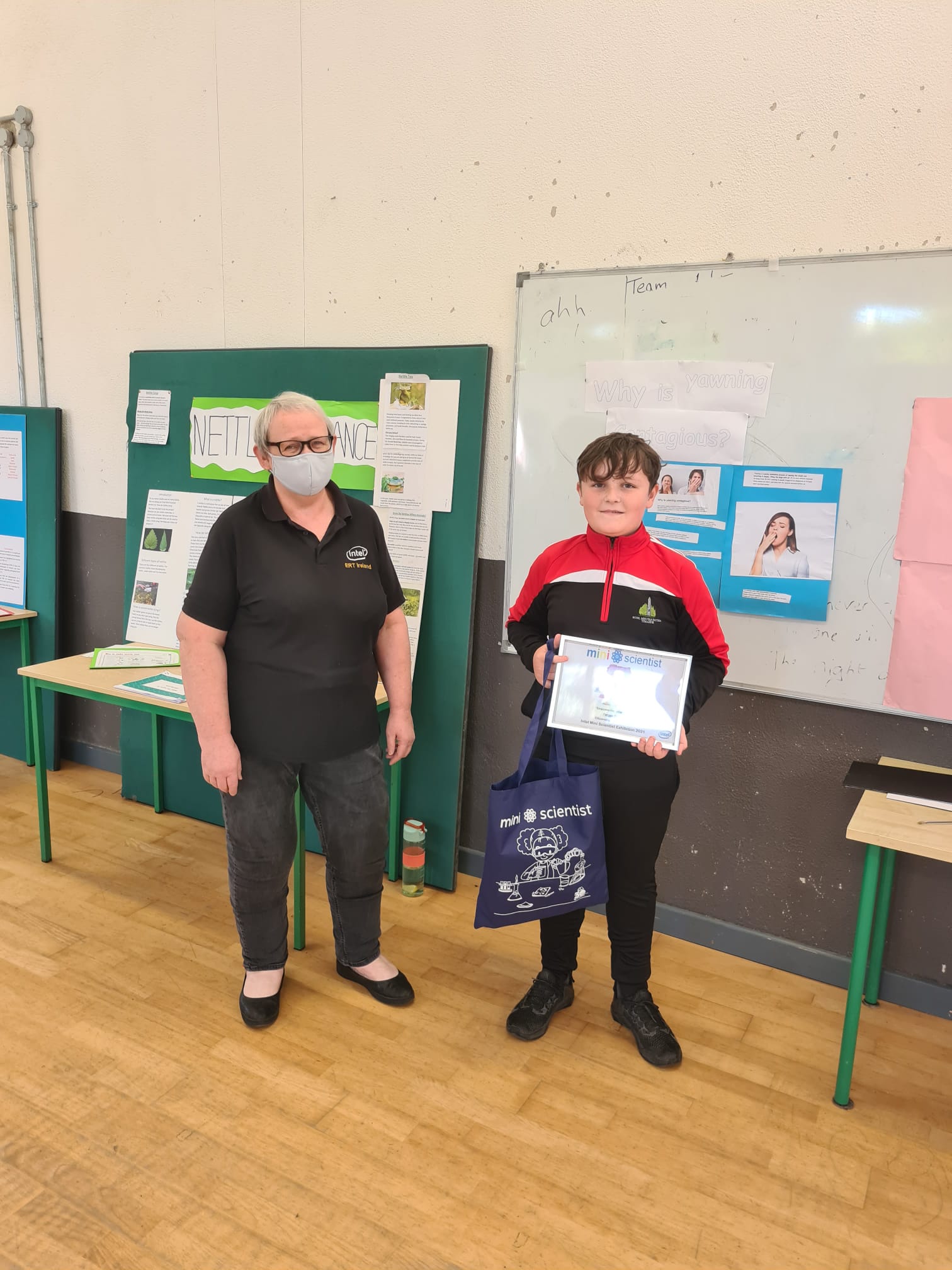 ‘Empowering Dis – ability’ by Fergus Delaney was a lovely project that aimed to raise awareness on the negative effects of ableism and to spread the message of being kinder to everyone.

Fergus scooped the Citizenship award for his efforts. ‘Fantastic Fizz’ by Zoe Dumbrell, Lilly Bennett, Sara Ramsbottom, Sarah Keane and Aoife Ramsbottom investigated the science of fizzy drinks and the girls were awarded for their brilliant presentation and communication skills. 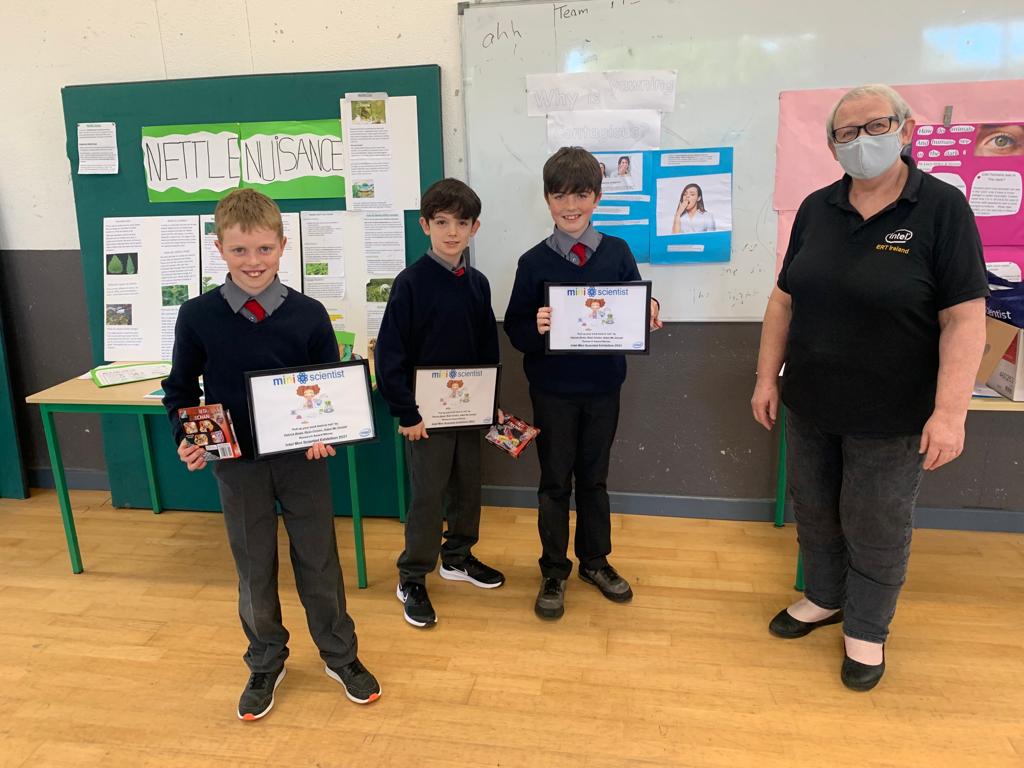 ‘Pull up your socks or not!’ was a project by Patrick Bowe, Ryan Conlon and Adam McDonald that studied the scientific evolution of football boots.

It was a great piece of work that involved surveys, research and interviews with Declan Hannon, Stephanie Roche and Bernard Brogan. This project was given the research award. 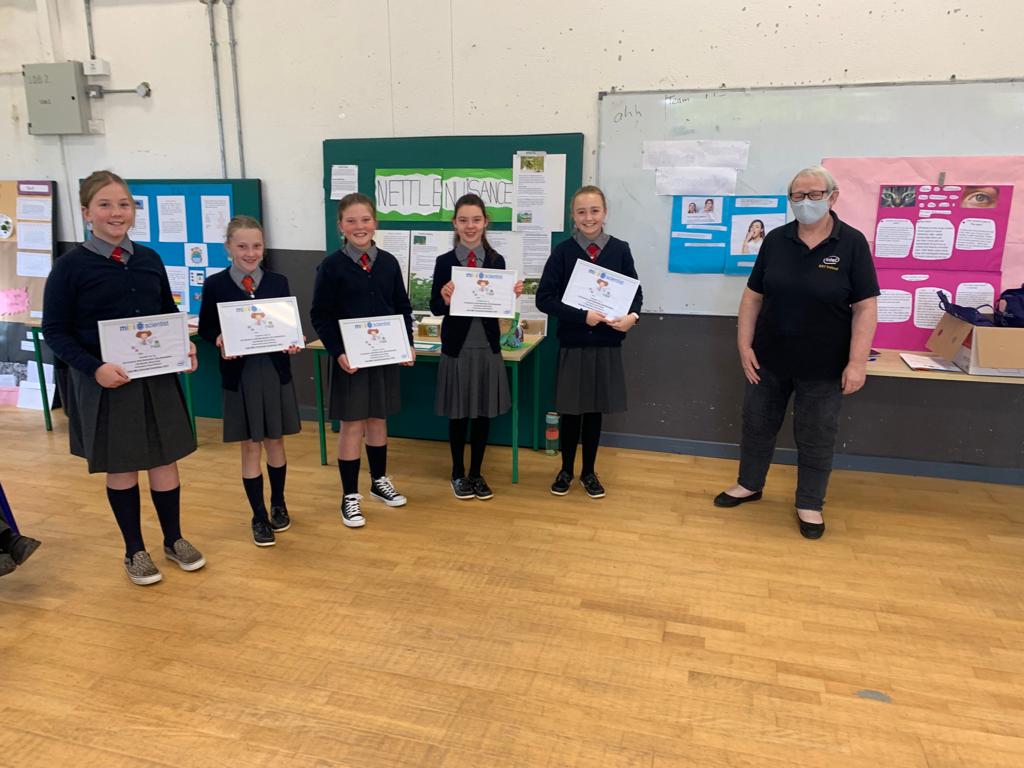 Aoife Galwey and Eabha Daly undertook a study called ‘Nettle Nuisance’ which examined how nettles sting and what are the best remedies for them.

Such was their enthusiasm for their topic that they managed to convince volunteers from 6th class to allow themselves be stung by nettles. All in the name of Science! 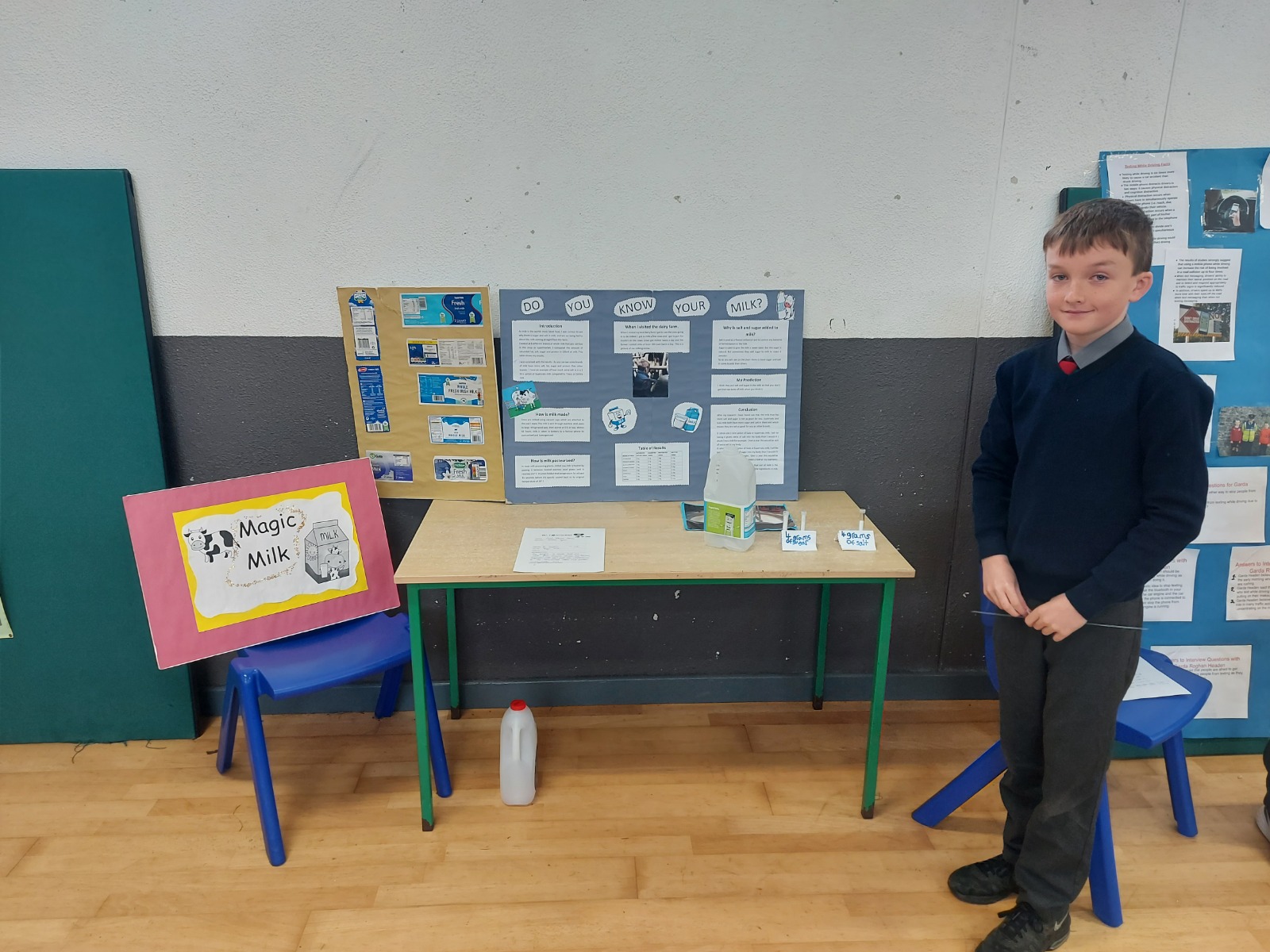 4th Class completed a class project on ‘Worms Beneath the Surface’ and had great fun investigating the positive impact of worms on soil conditions. They made their own wormery and had a great experience in conducting a scientific investigation.

Other interesting projects that caught the eye of the judges were ‘How Colour Affects Your Mood’ by Kate Ramsbottom, ‘Why is Yawning Contagious’ by Adam McEvoy and Sean Lynch and ‘How do Animals and Humans See in the Dark’ by Peyton McEvoy and Lucy Miller. All great projects studying human behaviour. 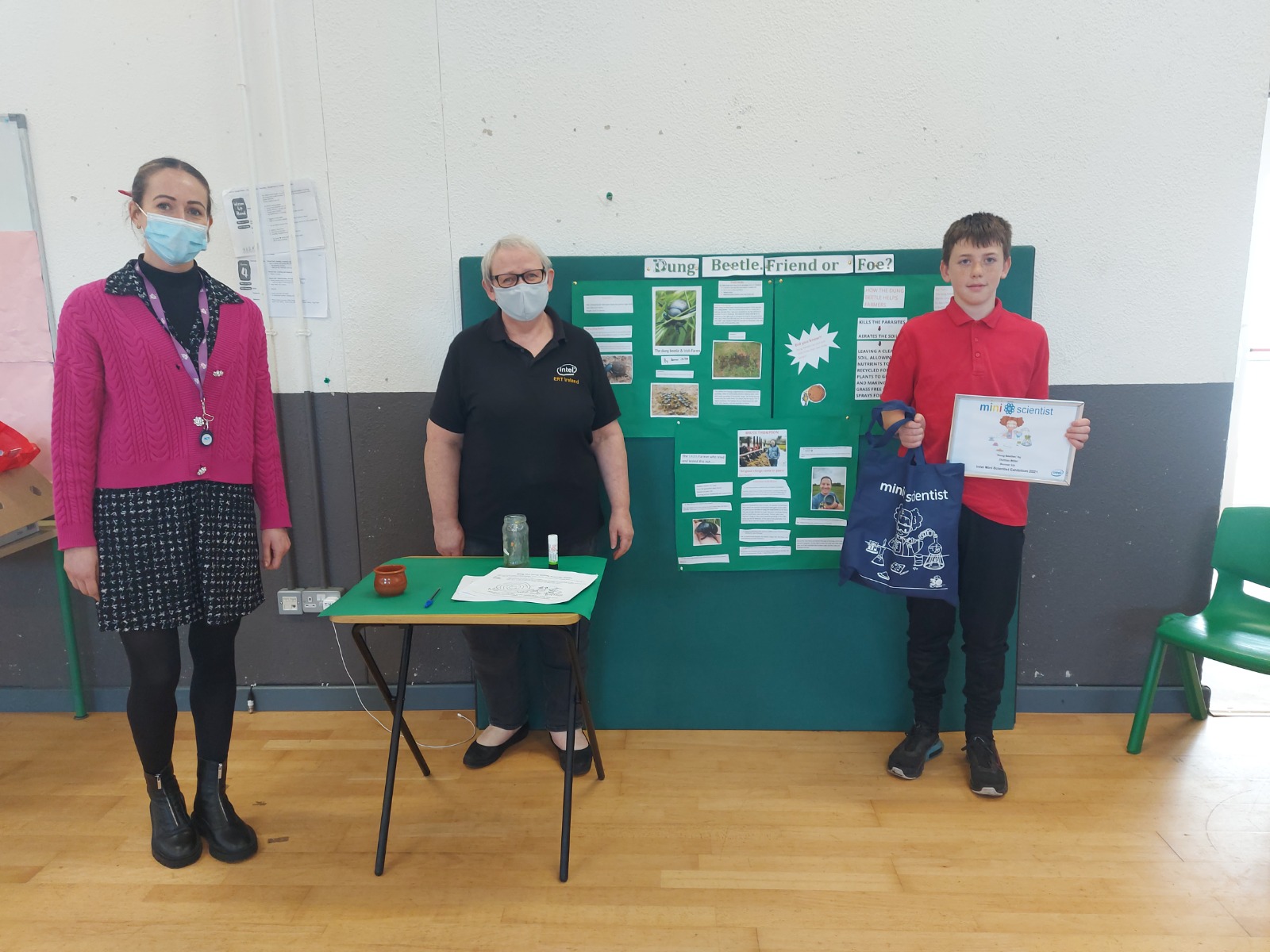 Technology was very prominent as always and Dylan Ramsbottom’s project ‘Wi Find Wifi’ was a very interesting study on Wifi.

Mark Hanley and Richard Miller looked at the negative impact of texting while driving. Local Garda Roghan Headen was interviewed for this great project. 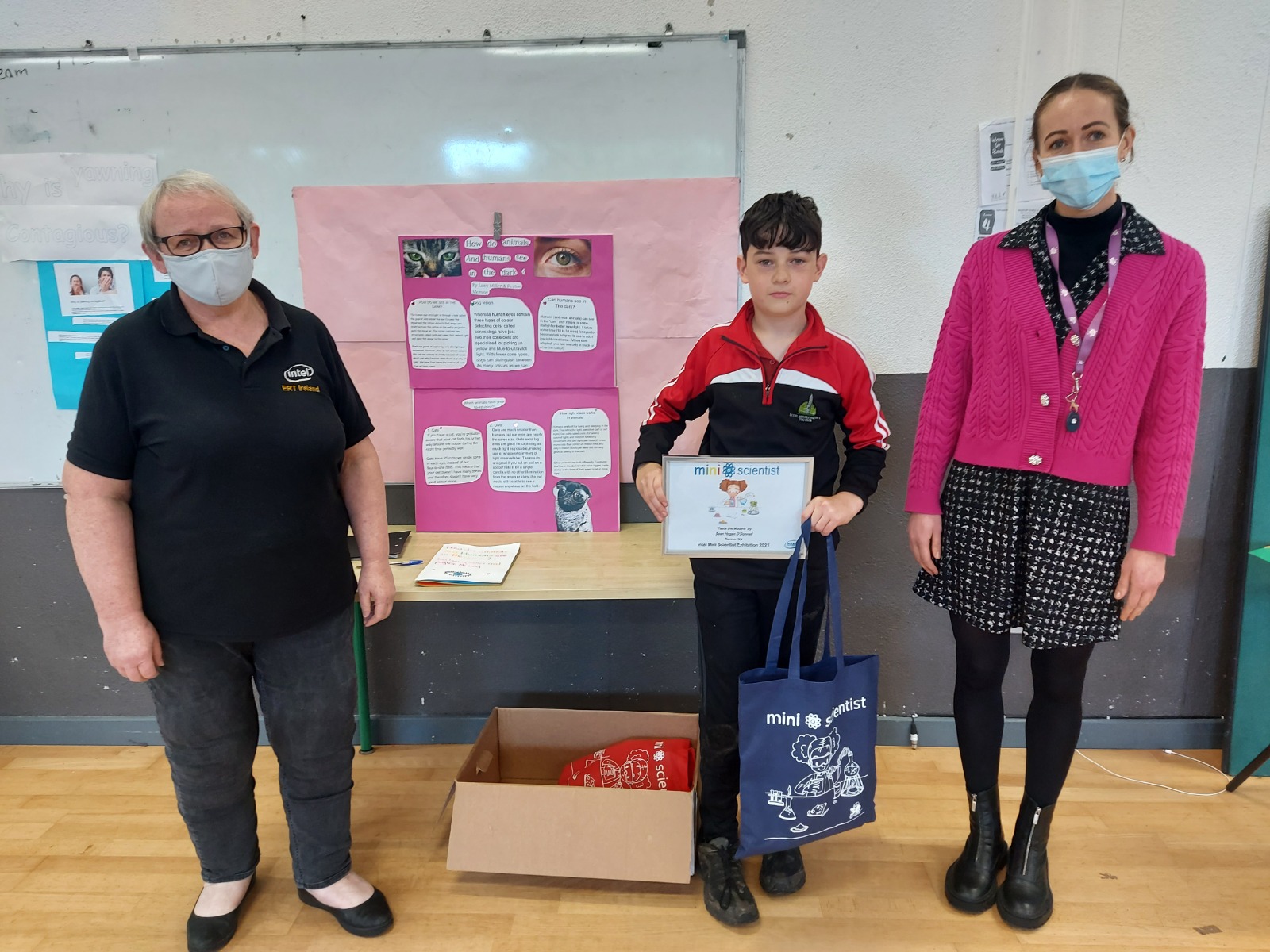 Eoin Jacob investigated “Video Game Addiction” and the impacts of it on children while Tomas Boyle, David Doyle and Killian Hendy did an impressive study on the damage ear phones can do to your ears. Their project was titled ‘Ear Killing Earphones’.

Food Science featured also and Thomas Tynan’s study on milk called ‘Magic Milk’ was both interesting and alarming. Who would have thought that milk is “the world’s most faked food”? 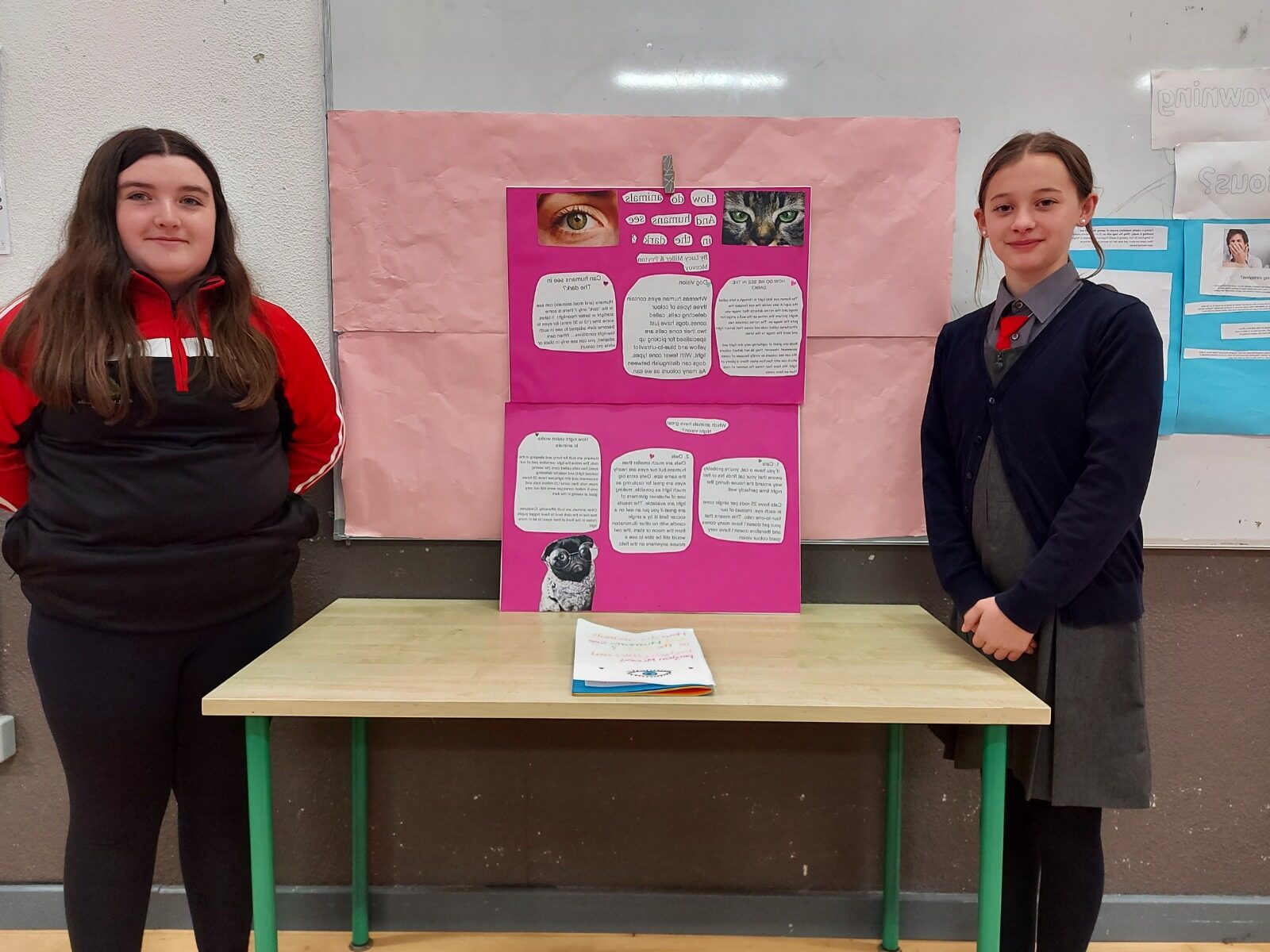 It seems the milk we buy every day in the shops contains much more salt and sugar than we would have expected. “Persuasive Preservatives” by Grace Daly, Meghan Coady, Jessica Rothwell and Quentin Kelly was another food science project that investigated home-made cooking with commercial products that have preservatives in them.

Finally, no science exhibition is complete without an explosion and “The Eruption of Truth” by Addison O’Reilly, Ciaran Headen, Billy Fennell and Shane Moran duly obliged. 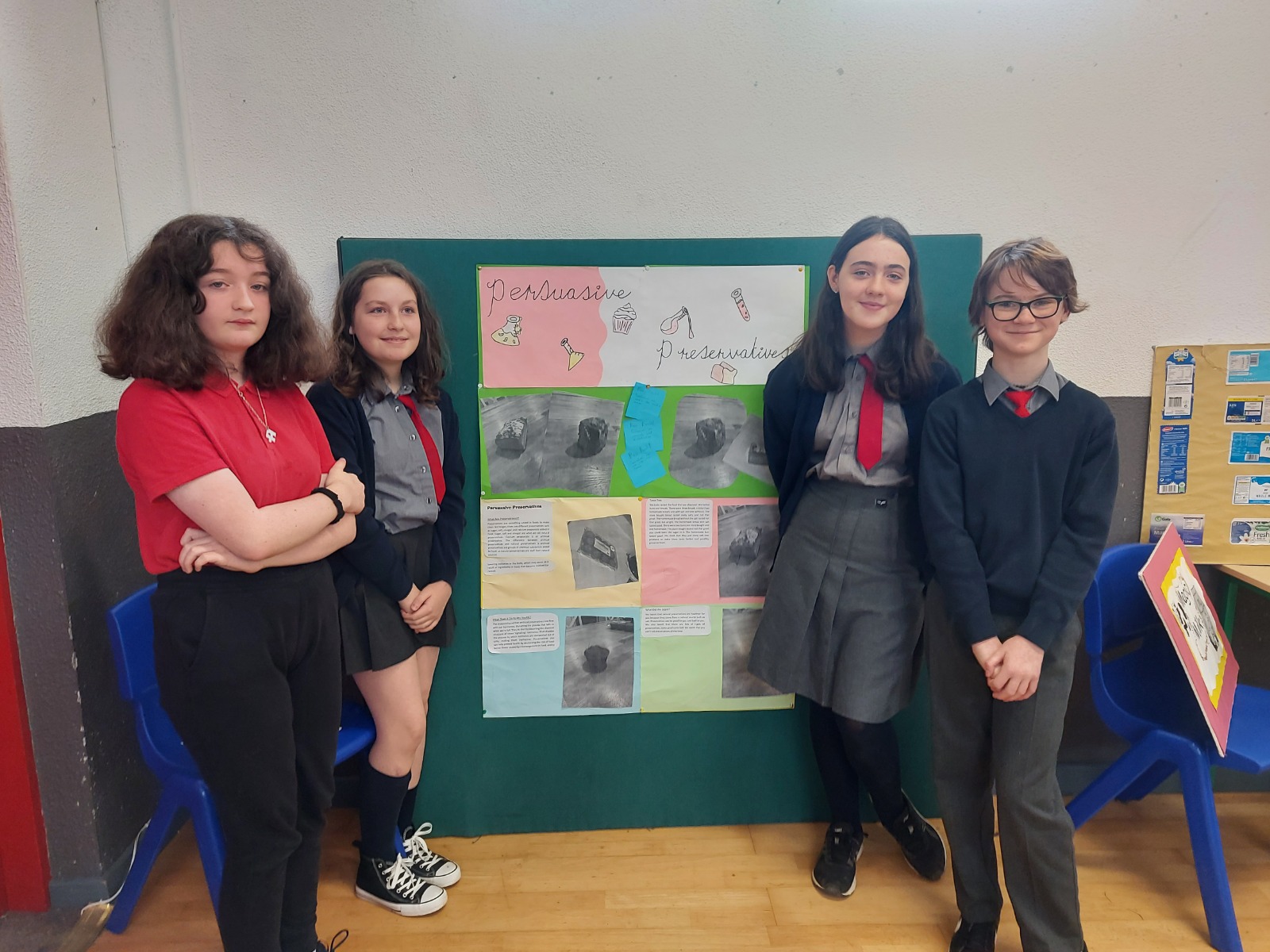 Their project on volcanoes was complete with a volcanic eruption much to the delighted of the judges and onlookers.

Anne Tilsen, the Intel judge was left with a major headache as she somehow had to pick a winner from what she described as “an astonishingly high standard of competition”. 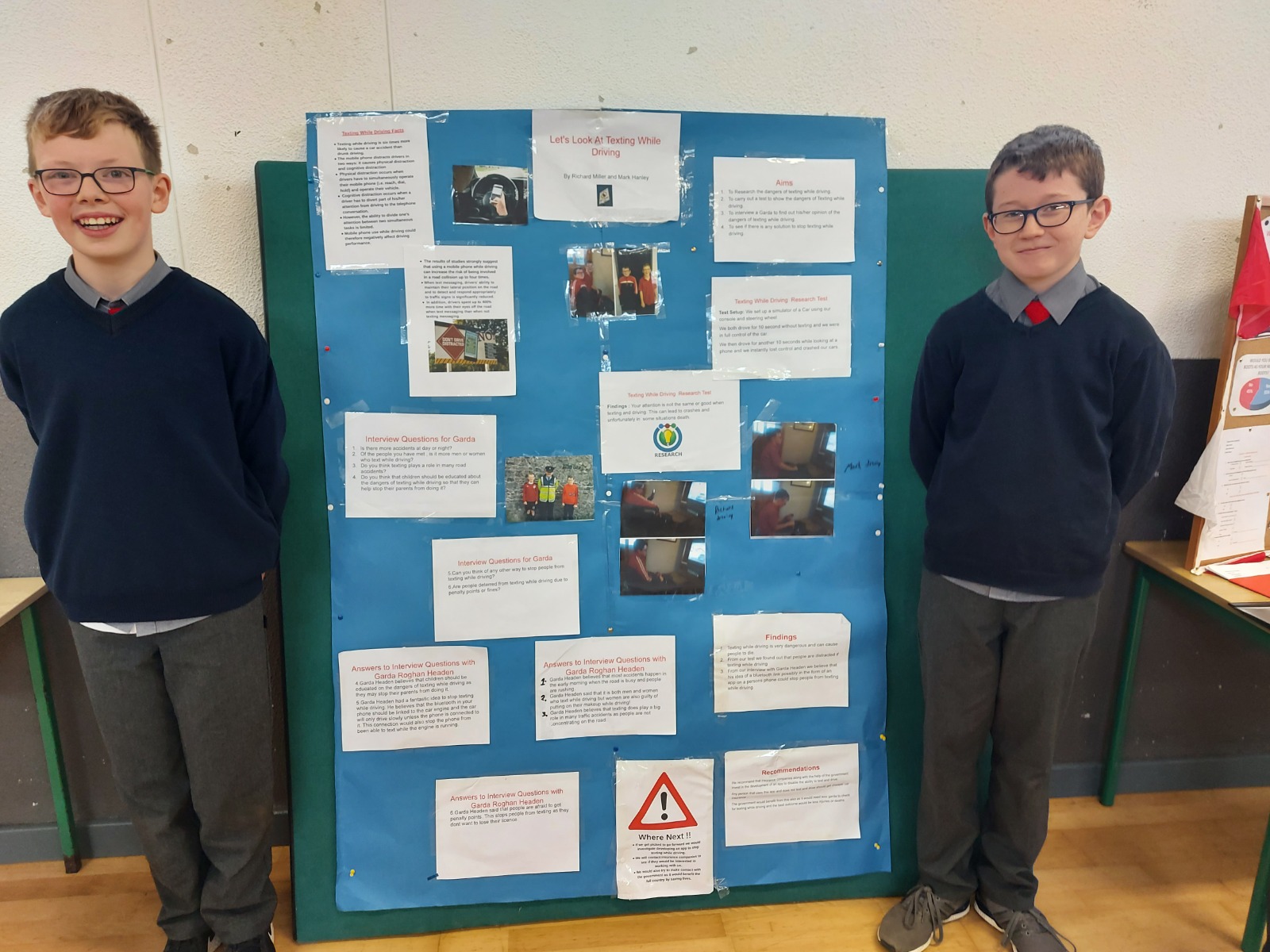 She praised the children for their projects that were “so polished, so diverse and so interesting”. She noted how the experience would give the children “a great grounding for presenting in secondary school and college”.

Principal, Ann Bergin was delighted with the exhibition and described it as “a significant step towards normality”. 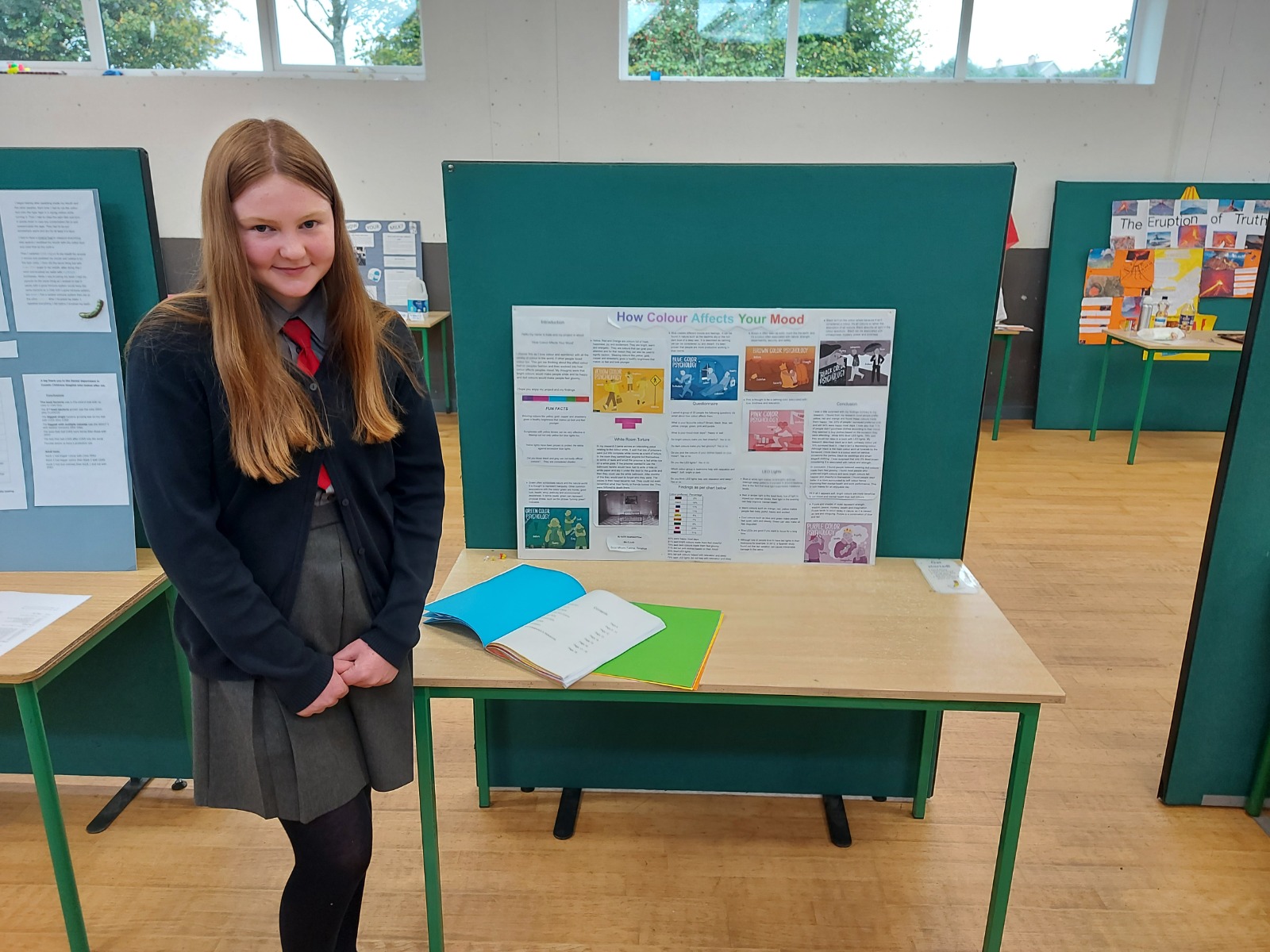 She praised the children’s enthusiasm and commitment to their projects and said that the results were “outstanding”.

The entire school will now support Gráinne as she exhibits at national level. 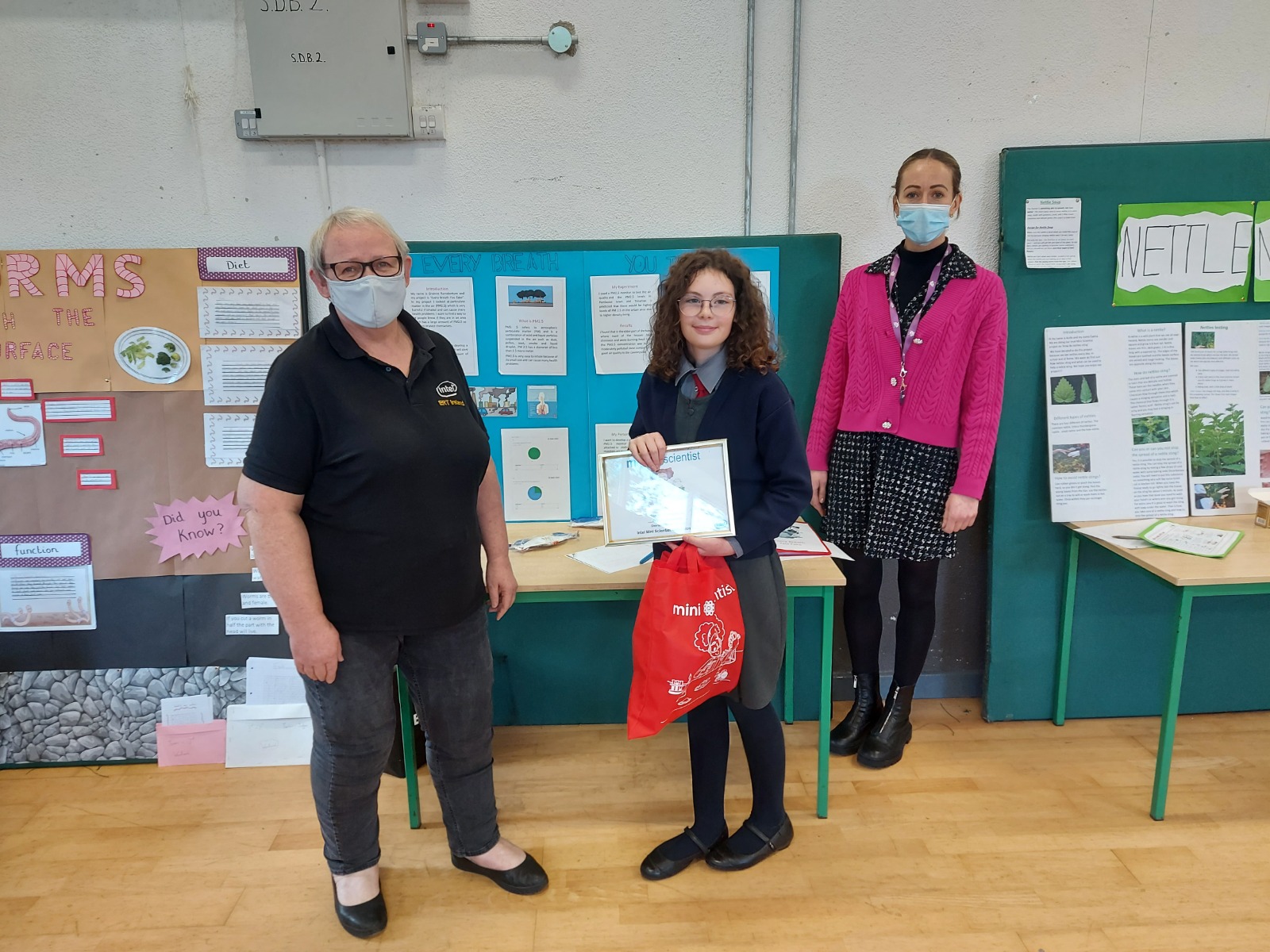 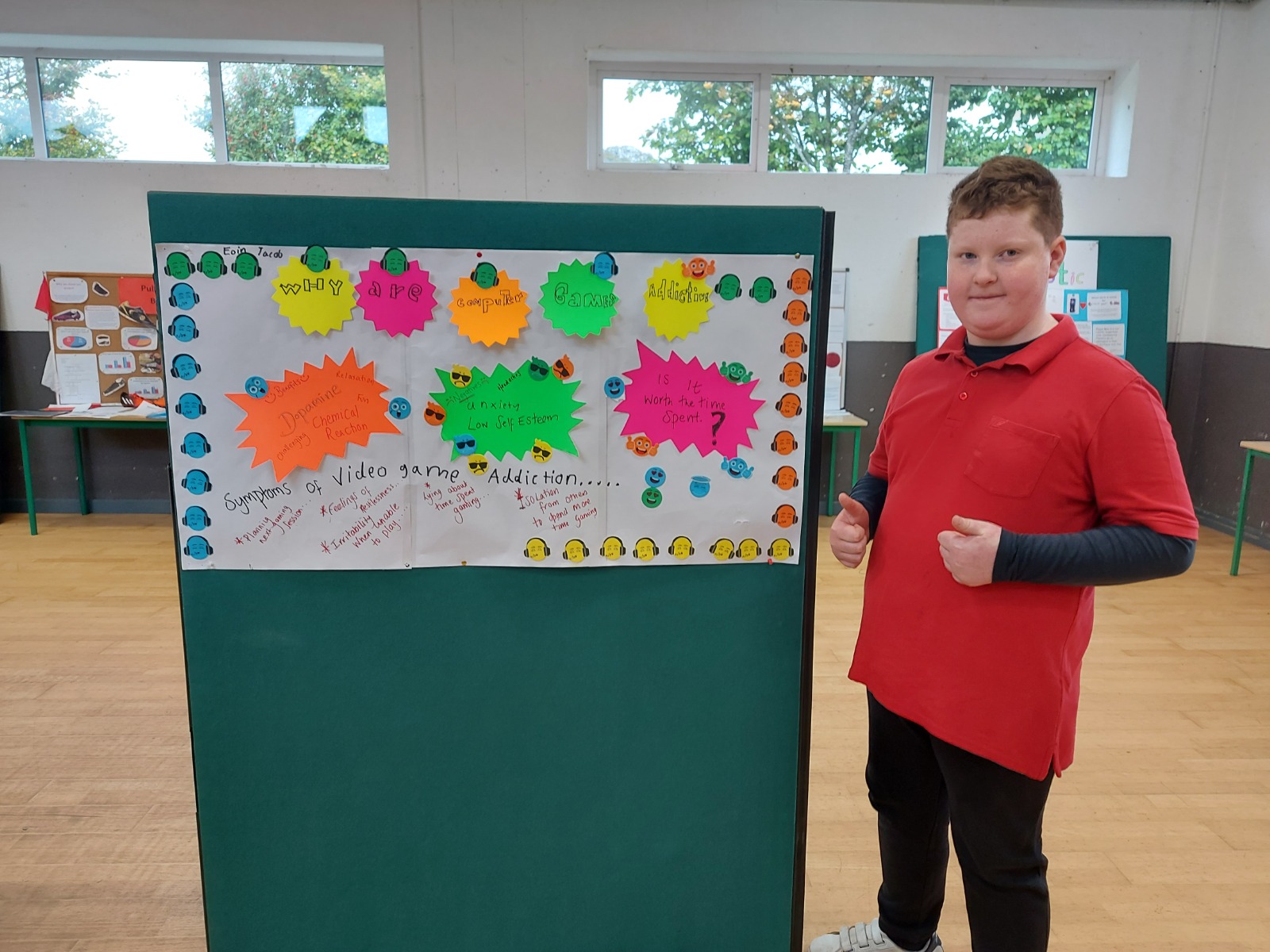 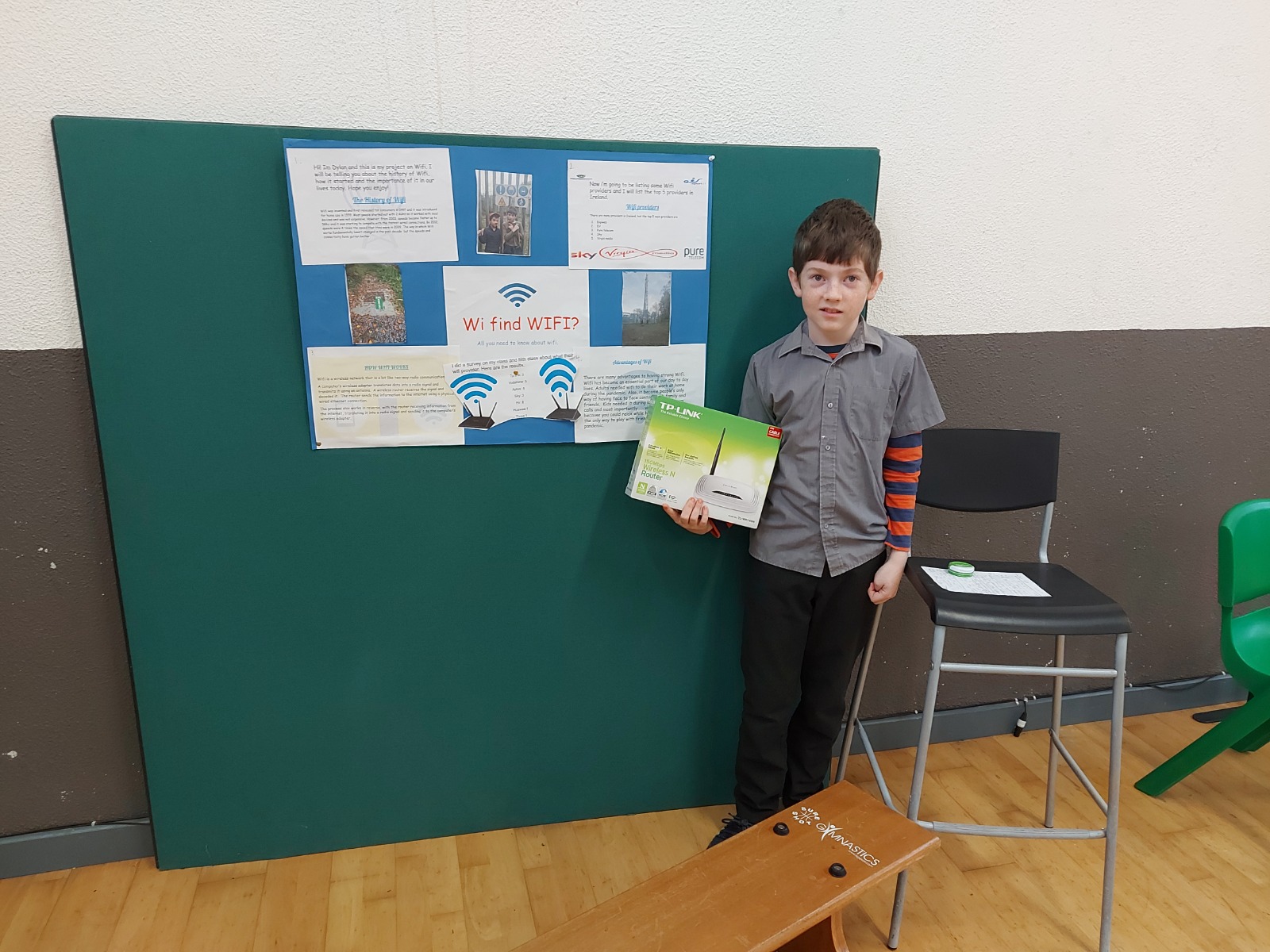 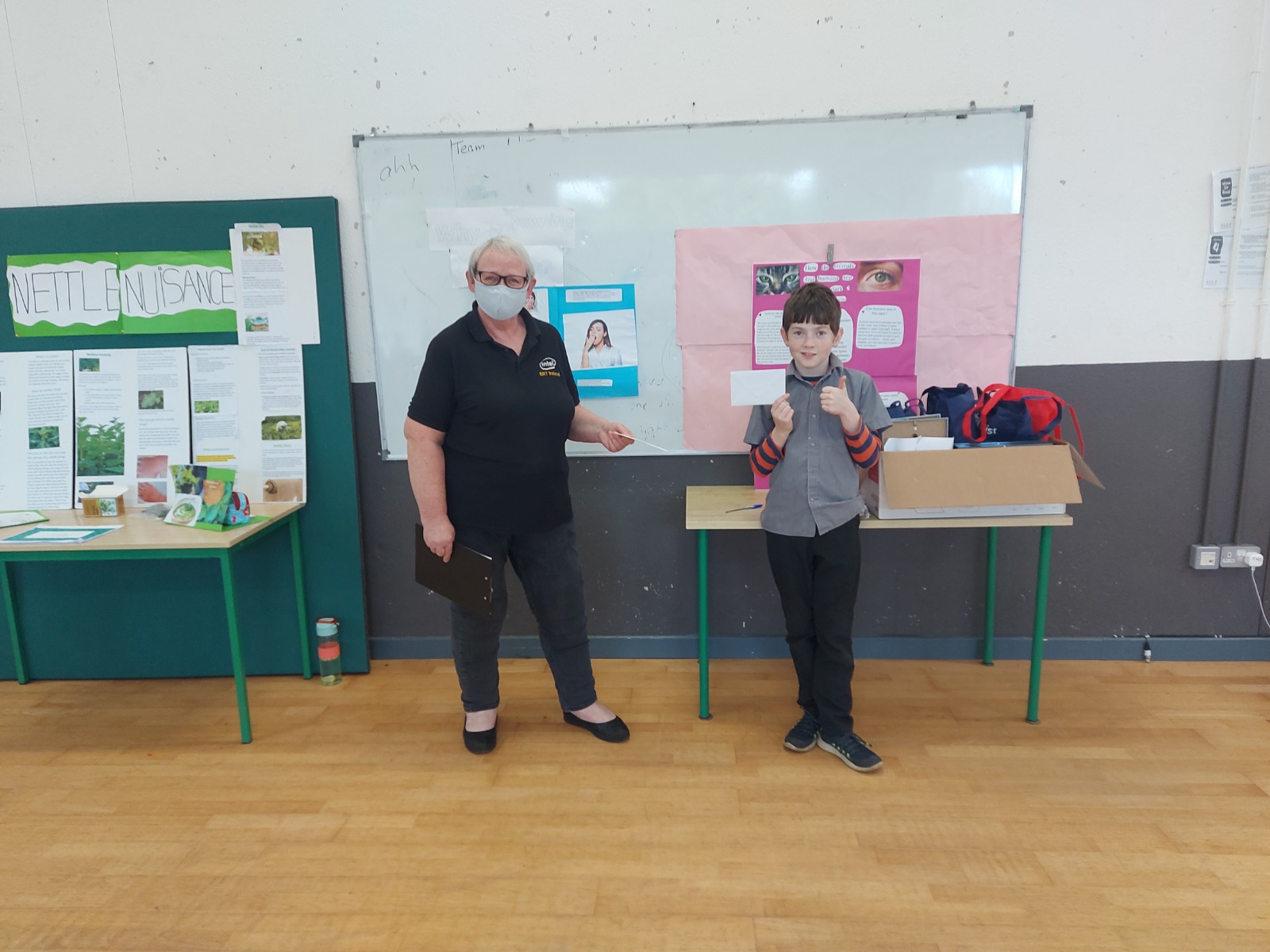 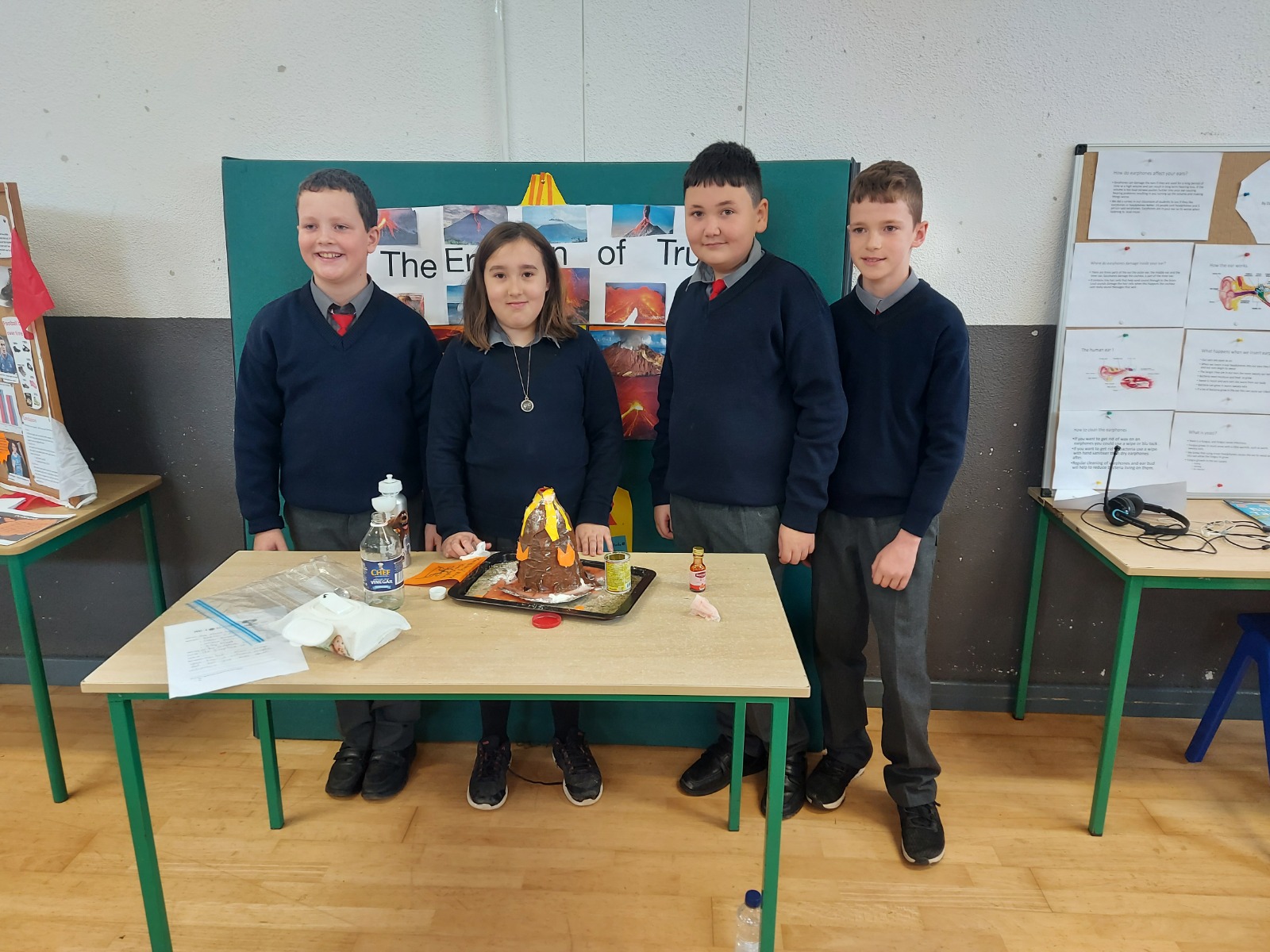 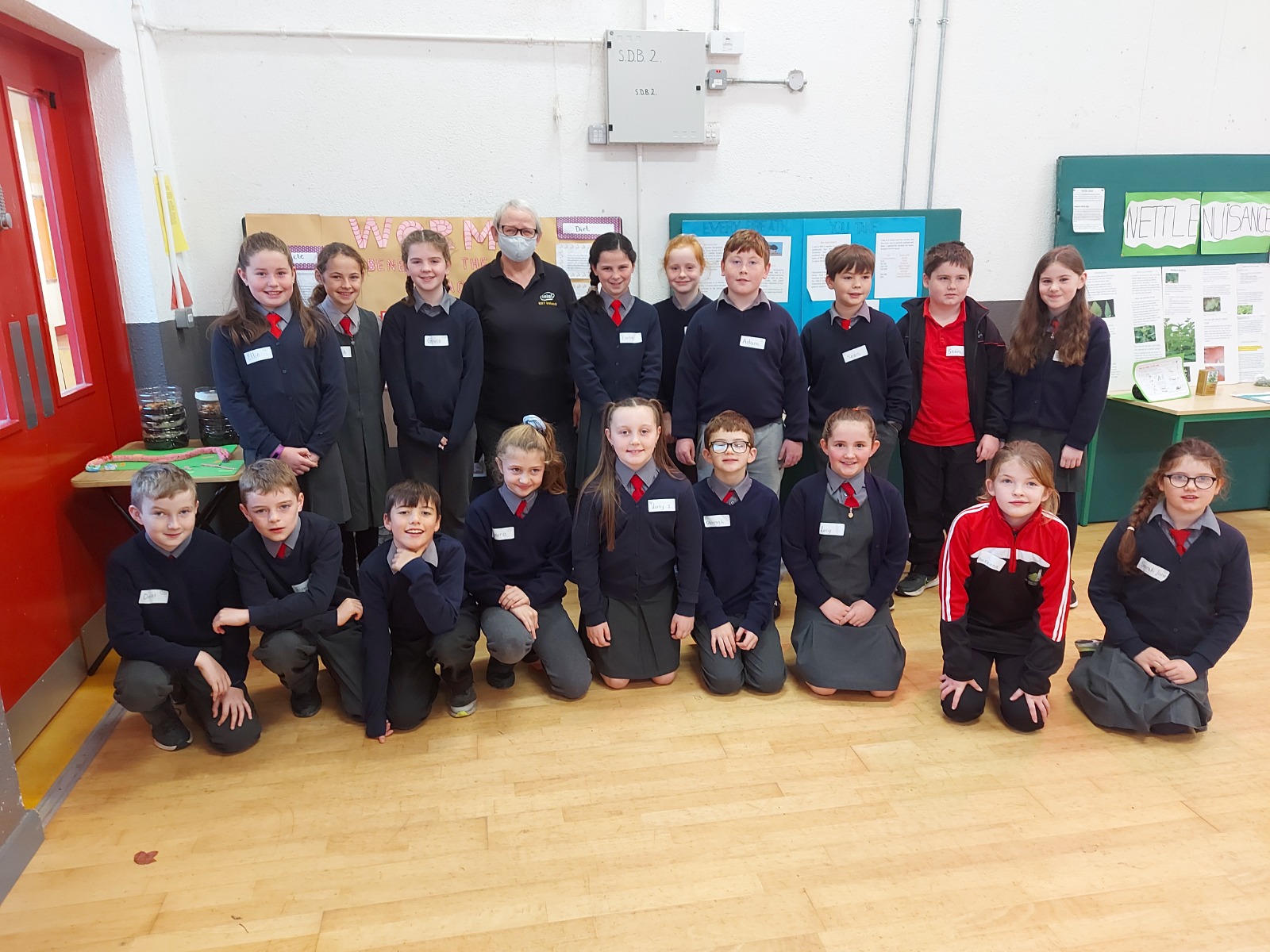 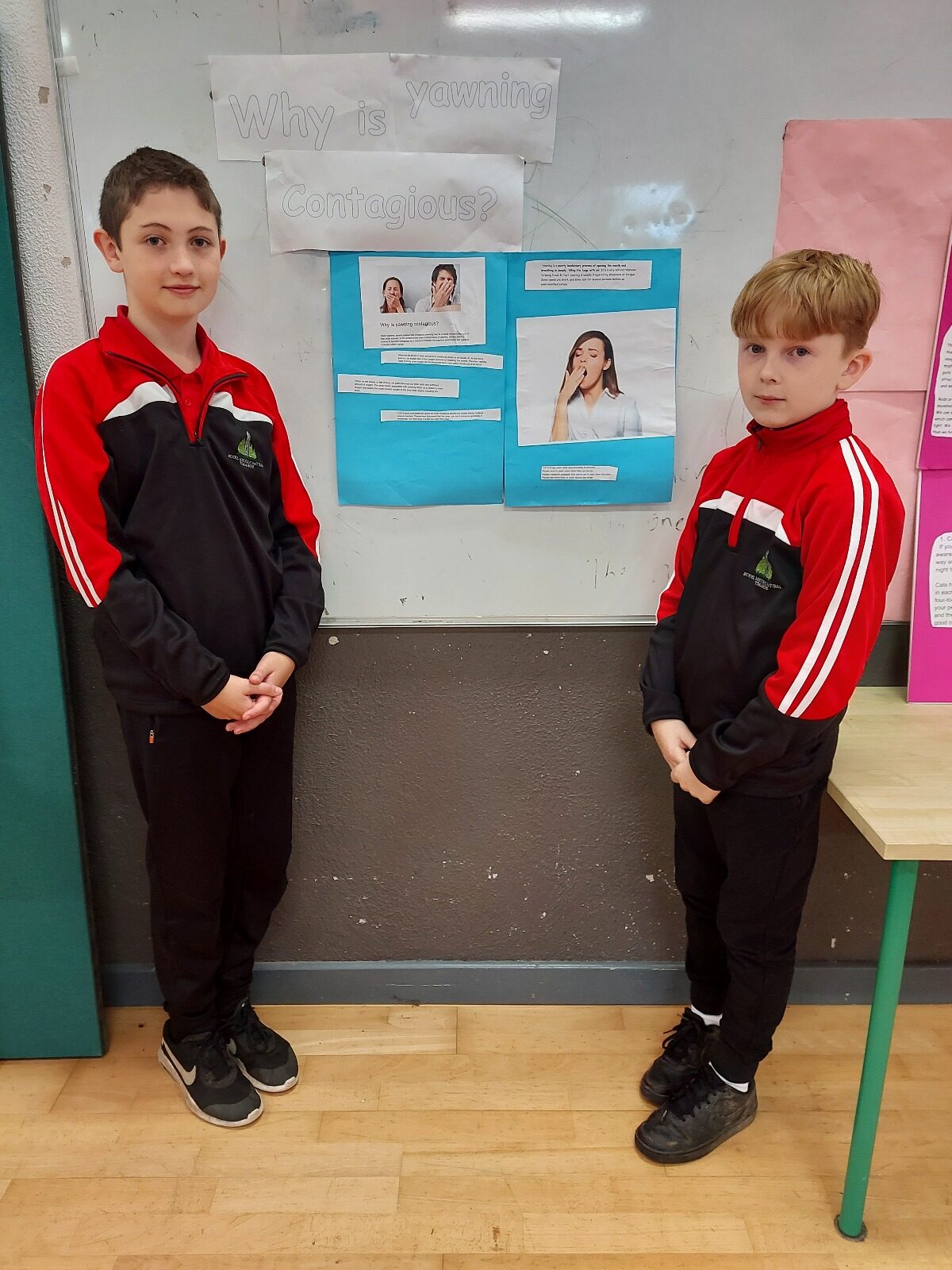