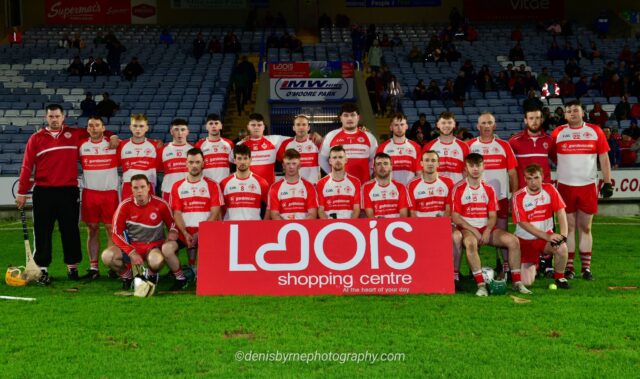 Trumera claimed a well-deserved Laois IHC title after a late flurry of points saw them past Clough-Ballacolla in O’Moore Park on Friday night.

With the teams deadlocked at 1-13 each after 53 minutes, Trumera rattled off six points in the next eight minutes to break Clough-Ballacolla hearts and get their hands on the trophy.

Niall Sinnott was key with four of those six points in the closing stages, with their defence repelling Clough-Ballacolla’s frantic late efforts to claim a goal to wrap up the win.

Neither side could claim to have made a fast start, as it took them both a while to settle into proceedings. Chris Rafter saw an early free hit the post for Clough-Ballacolla in what was the only real chance of the opening minutes.

The game’s first score finally arrived in the sixth minute via Trumera goalkeeper Finnian Cuddy, who launched over a free from inside his own half.

Chris Rafter replied for Clough-Ballacolla a couple of minutes later when he split the posts with a 65 before the same player then put them ahead from a free, after a foul on Canice Coonan.

Trumera responded within seconds through centre-forward Conor Madden as he scored a superb point from way out on the right wing. Niall Sinnott then put them back in front with a free from midfield, and we were treated to some excitement then either side of the water break.

Clough-Ballacolla struck for the opening goal of the game when they persistence was rewarded. Canice Coonan bore down on goal only to see his shot well-saved by Finnian Cuddy.

Chris Rafter tried to force home the rebound only for James Kerwin to block it on the line, but before he could bring the ball under control Coonan stole in to guide the loose ball to the net.

The whistle went for the water break immediately after and, within seconds of the resumption, Trumera had struck for a goal of their own.

Cathal Brophy cut in from the right wing and teed up Dylan Lalor, who cracked a first-time shot to the net.

The second quarter was much more entertaining than the first as both teams found scores easier to come by. Trumera managed to get their noses in front and keep them there, as they spread the scores across their forward line. Adam Kirwan, Cathal Brophy and Paddy Hosey (2) all hit the target, while Shane Hyland and Chris Rafter were keeping Clough-Ballacolla in touch.

Trumera hit something of a purple patch in the few minutes before half time and managed to take a four point lead to the dressing rooms, 1-10 to 1-6. 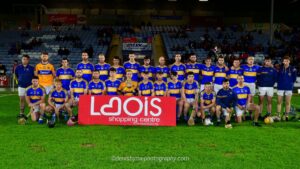 Clough-Ballacolla were quick out of the traps in the second half thanks to a Shane Hanlon point, with Canice Coonan adding another soon after to get them within two. That set the tone for the next ten minutes or so, as Clough-Ballacolla chipped away at the Trumera lead and the men in red and white tried to keep themselves ahead.

They just about managed to do it thanks to Niall Sinnott and Adam Kirwan, but by the time the second water break rolled around, another Canice Coonan point had just two between them, 1-13 to 1-11.

That soon became one when Padraig Brennan landed a free from his own 65 yard line as the tension rose with every passing minute.

The one point gap disappeared in the 53rd minute thanks to Joe Corby, with the game now well and truly there for the taking. When it came down to it then, it was Trumera who found the extra gear.

Niall Sinnott really stepped up to the mark for them with some crucial points from frees, hitting four in the closing eight minutes. Joey Coogan also added one after coming in for the injured Conor Madden, leaving Clough-Ballacolla with a hill to climb. They needed goals but the Trumera defence held firm, as they ran out three point winners in the end.