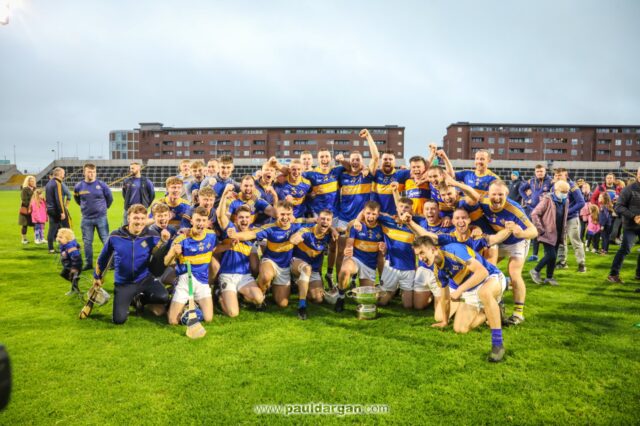 Clough-Ballacolla’s defence of the Laois SHC goes on to the final as they came from behind to defeat Rathdowney-Errill this afternoon.

They had to do it the hard way too – losing a man to a straight red card in the final minute of the first half – but they were good enough to come back and win.

Jordan Walshe and Stephen Maher were deadly accurate for Declan Laffan’s charges with 15 points between them.

Rathdowney-Errill struck for two late goals which made the scoreline look a bit closer than it actually was.

Rathdowney-Errill played with the wind in the first half but set up with Eric Killeen as a sweeper and just Dylan Carroll and Ross King operating in the full forward line.

It didn’t really work in the first quarter as, unlike in the previous games this weekend, Rathdowney-Errill were unable to build up a big lead.

Dylan Carroll and Paddy Purcell landed a brace each for Rathdowney-Errill in that opening period as James Ryan also scored.

Clough-Ballacolla kept with them though as Stephen Maher scored three while Aidan Corby chipped in with one to leave them behind by one at the water break – 0-5 to 0-4.

But it was all change after that as Rathdowney-Errill clicked into gear when play resumed.

Dylan Carroll added two more frees and then a beautiful piece of skill from Paddy Purcell in front of the stand allowed him to race clear and shoot low into the corner of the net.

The sides traded points after that and it looked like the half would ebb to a conclusion until we had very late drama.

From nothing, a shemozzle broke out in front of the Ballacolla bench and Eoin Doyle appeared to strike Rathdowney-Errill’s Paddy McCane.

Linesman Brochan O’Reilly consulted with referee Padraig Dunne and a red card was brandished to the Clough-Ballacolla corner back.

Paddy McCane and Willie Dunphy received yellows too as Rathdowney-Errill took a 1-9 to 0-7 advantage, and a man advantage, into half time.

Clough-Ballacolla now had to do what no team has managed so far this weekend – overturn a half time deficit – and they made a good start as Aidan Corby scored within ten seconds.

Dylan Carroll replied but Jordan Walshe landed a 65 and Willie Dunphy scored a point – but it could’ve been a goal only for an excellent Damien Madden save to divert it over.

Clough-Ballacolla kept pressing with Walshe converting another two 65s and then Willie Dunphy landed a sideline cut to level the game after 42 minutes.

Liam O’Connell and Robbie Phelan then traded efforts before a Jordan Walshe free gave the 14 men a 0-15 to 1-11 lead at the second water break.

Jordan Walshe, Stephen Maher and Robbie Phelan extended that when play resumed and they led 0-18 to 1-11 with 50 minutes on the clock.

Rathdowney-Errill went in search of goals but Cathal Dunne came up with two big saves to deny Paddy Purcell and Paddy McCane in separate chances.

The goal did come in the 58th minute via James Ryan and they had another a minute later through Paddy McCane but Darren Maher produced an excellent block.

A third goal came in the third minute of injury time through Jack Kelly but Jordan Walshe made the win safe with the final puck.