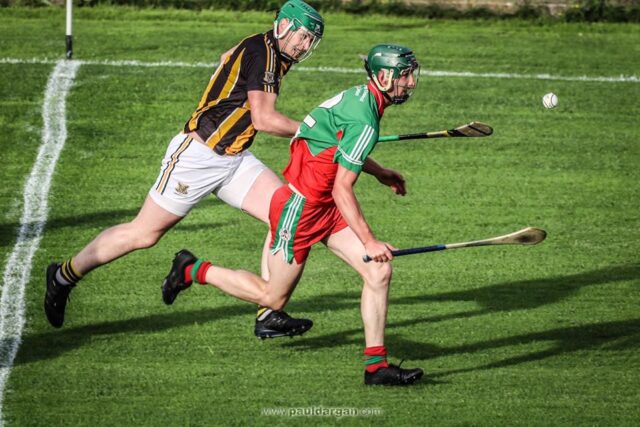 Borris-Kilcotton are back in the Laois Senior hurling championship final for the third successive year following an impressive victory over Camross.

Ciaran Comerford’s charges used the wind to build up a first half lead and their defenders barely gave Camross a snuff in the second half – and when they did get in near goals, Eoin Fleming proved unbeatable with five excellent saves.

They will now face the winners of Clough-Ballacolla and Rathdowney-Errill in the final as they look to win their first title since 2016 – which is their solitary victory since the clubs joined up.

The opening quarter was breathless stuff as the game started at a million miles an hour and continued like that for 16 minutes.

Borris-Kilcotton had the wind and used it to good effect initially firing seven points and no wides in the opening ten minutes.

PJ Scully, Aaron Dunphy, Colm Stapleton, Joe Campion and Noah Quinlan were all on the scoreboard in that period.

Liam Delaney and Niall Holmes were Camross’ only scorers in that period but they came into after that with a free and an excellent sideline cut from Zane Keenan.

They then drew level with a goal after 12 minutes. Ciaran Collier won a Tadhg Doran puckout and played a low ball into Mark Dowling who flicked it inside to David Mortimer and he shot low to the net.

Borris-Kilcotton responded with a brace of PJ Scully frees to take a 0-9 to 1-4 lead at the first water break.

The second quarter was a bit more scrappy with plenty of frees and niggly stuff going on around the field.

Camross only added one more point to their tally in in through Zane Keenan while Borris-Kilcotton added four.

PJ Scully, Aaron Dunphy and Campion all added to their tallies to leave them 0-13 to 1-5 ahead at half time – but would a five point lead be enough against the wind?

Zane Keenan and David Mortimer instantly cut the gap on the resumption but two PJ Scully frees and a point from sub Stephen Dunphy left it 0-16 to 1-7 after 40 minutes.

Camross had two goal chances too that they missed – one for sub Eoin Gaughan on the run which Eoin Fleming saved and another from a 13 metre free from Zane Keenan which was stopped on the line.

Borris-Kilcotton soaked up all that pressure and an Aaron Dunphy point gave them a 0-17 to 1-7 lead at the second water break.

Camross had gone 17 minutes without a score when David Mortimer pointed in the 49th minute but they went in search of goals after that – with Eoin Fleming making a series of saves.

Borris-Kilcotton were comfortable though and saw the game out well for a very impressive win.