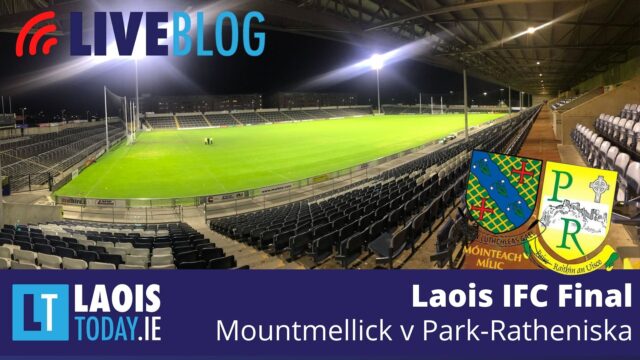 The Laois intermediate football final is down for decision in O’Moore Park this evening as Park-Ratheniska and Mountmellick clash in a novel decider.

Park-Ratheniska are seeking a somewhat novel junior-intermediate double having only won the 2020 junior final back in June but standing in their way is a decent Mountmellick side keen to make up for the disappointments of recent years.

Having been relegated in 2017 after an 11-season stay at senior, Mountmellick have since lost the 2018 intermediate final and the 2019 and 2020 semi-finals.

Though they have many years to make up on the club’s team of the 1990s and 2000s, it is still somewhat reminiscent of their last success in this grade in 2006 which they won after previously losing finals in 2002 and 2004.

For Park-Ratheniska they are seeking to return to the senior ranks for the first time since the mid 1990s and a first intermediate title since 1988.

They spent six seasons at junior from 2015 to 2020 and it would make for some achievement to go back-to back in this manner.

Comprehensive wins over Timahoe and Crettyard put them straight through to the semi-final and they finished superbly to see off Arles-Kilcruise in the semi-final.

Mountmellick have also impressed en route to the final, getting the better of Arles-Kilcruise in a battle in the first round and then recording big wins over O’Dempsey’s and Timahoe.

For both sides this will be their toughest challenge to date but there’s no doubt the competition’s best two teams have reached the final.

We will have all the updates from 7.30pm on our Live Blog.