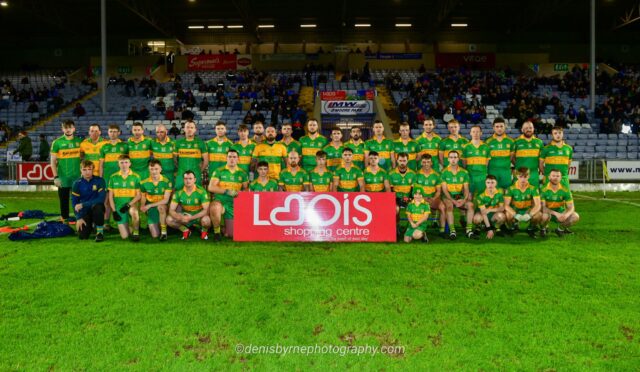 Park-Ratheniska will be a senior football club in 2022 following a stunning intermediate final win over Mountmellick in O’Moore Park this evening.

The win completes a remarkable couple of months for the club after they only won the 2020 junior title back in June. It’s certainly a year that will take a fond place in their proud history.

Both teams had played free-flowing attacking football en route to the final but the evening was wet and miserable and the pitch was heavy.

This was a war of attrition from the start but developed into a great contest as the game went on with Park-Ratheniska deservedly seeing the job out having never once trailed.

Park were dealt an early blow with the black carding of Simon Fingleton after just four minutes but there was only one point in the opening quarter – a well-struck free from James Connolly – and they led by 0-1 to 0-0 at the first water break.

It took until the 18th minute for Mountmellick’s first score, a free from Niall Mullen after Colm Coss was fouled – but Park replied from the next kickout with Kieran Delaney popping over with his left after a nice pass from Brian Dunne. From the next attack James Connolly kicked another free after being fouled by Richie McElwee.

And from the next attack Park scored again. This time the outstanding Podge Dunne finishing brilliantly past Eoin Keogh after a lovely pass from his brother Brian.

A Niall Mullen free pulled one back for Mountmellick and then Coss landed one from play straight away. But Park were relentless and two in a row from the brilliant Kieran Delaney – one off each foot – and then one from Mark G Delany had them six up approaching half time before another Mullen free reduced the gap with the last kick of the half. At the break Park led 1-6 to 0-4.

The third quarter was real helter-skelter stuff. Mountmellick upped it considerably and the wind at their back, they began eating into the lead. Though Sean Tynan got the first point of the half for Park, John Noonan and Niall Mullen responded for Mountmellick.

A James Connolly free kept Park at arms’ length but Mullen responded with a free of his own and while Brian Dunne hit back again for Park, Mountmellick got the next two, nice efforts from play from Eoin George and Mullen.

But the last score of the quarter went to Connolly – a lovely effort from play – after Podge Dunne had been initially denied by a brilliant Eoghan Keogh save. At the second water break Park still had a four-point cushion, 1-10 to 0-9. And they got the first two points on the restart too – from Brian Dunne and Mark G Delaney.

Mountmellick refused to go away and Coss and Mullen (free) hit back again. Going into the last ten minutes there was four in it and Mountmellick needed a goal.

They never really looked like getting it though and Park finished it out in style with late points from Kieran Delaney and DJ O’Connell.

What a year. What a success. Serious celebrations, the Leinster club championship and senior football await.