Laois Arts Office and Dunamaise Arts Centre are delighted to present Leaves 2021, the 14th annual festival of writing and music in Laois, taking place from 2nd to 7th November.

Clíodhna Ní Anluain is the Guest Curator this year and the festival takes place at Dunamaise Arts Centre in the heart of Portlaoise town, celebrating a diverse and rich synthesis of contributors within a multi-media programme featuring live and virtual events with everything from conversations to readings, film, theatre, essays, music, workshops and more. Tickets for all events are on sale from www.dunamaise.ie.

Leaves 2021 celebrates what happens at the edges, remotely, away from the so-called given centre of things and the many writers attending remind us to notice the richness and complexity of ordinary detail, of the consequences of the disruption to routine and to what can perhaps unintentionally be overlooked. 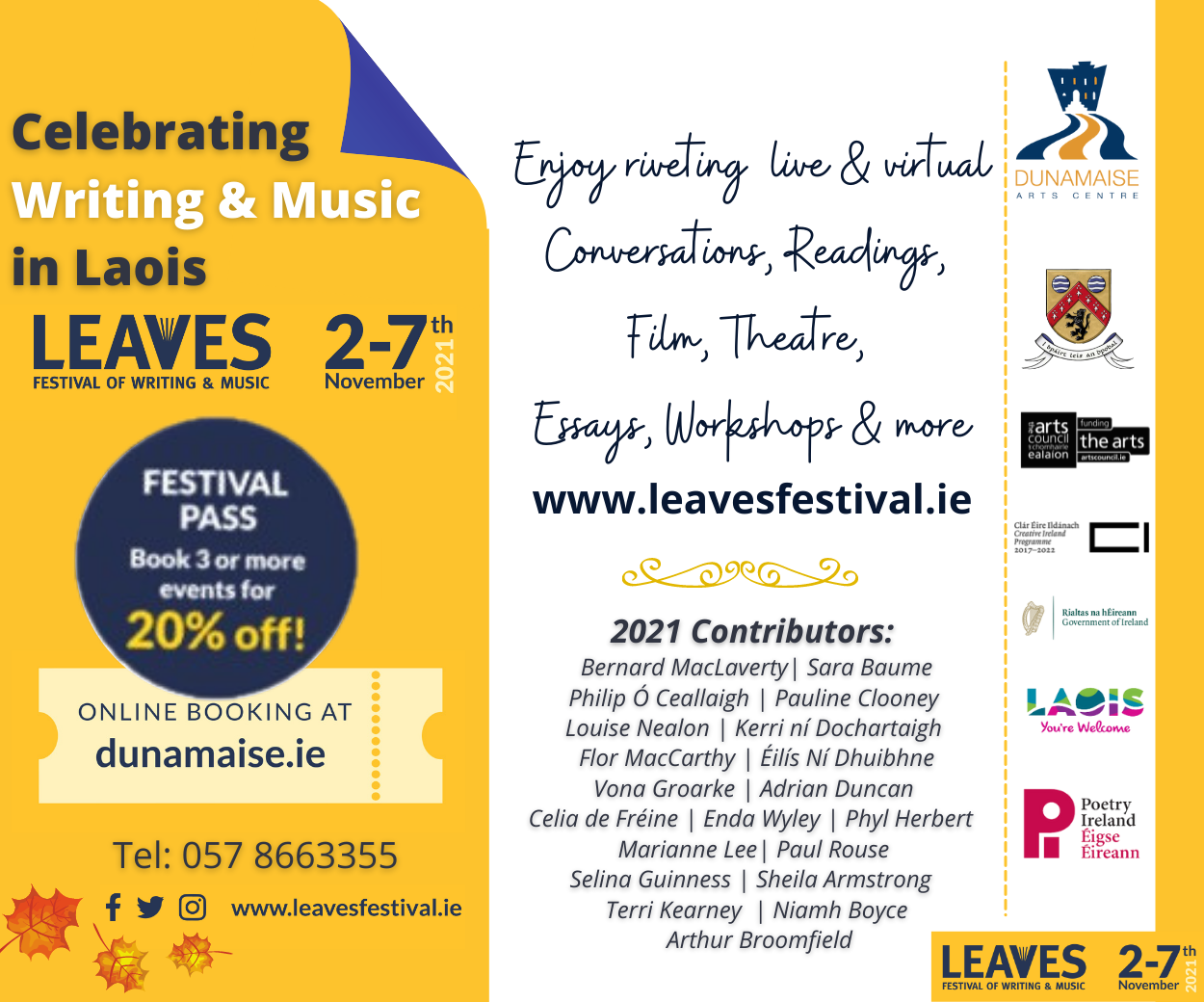 Festival highlights include a celebratory evening led by Flor Mac Carthy of the art of letter writing through the wealth of fascinating and entertaining correspondences to and from our Presidents from Douglas Hyde to President Michael D Higgins.

A rare opportunity to savour a live reading by short-story supremo Philip Ó Ceallaigh from his highly praised 2021 collection Troubles and a conversation between himself and writer Enda Wyley.

The writing lives of trail-blazing Irish women including Éilis Ní Dhuibhne, Celia de Fréine and Phil Herbert will be the focus at what is sure to be a hugely important and engaging conversation around the determination and achievement of woman in being finally recognised as equals in Irish literary life.

Selina Guinness will be in conversation with two young writers whose careers’ as published authors are beginning: Louise Nealon‘s debut novel Snowflakes was published this year and Sheila Armstrong‘s first short story collection will be published next Spring.

The Alphabet of Birds is a wonderful hybrid production combining a screening, a spoken essay performed by visual artist Sara Baume, along with live music by Irene Buckley.

Punctuating the spoken essay are four short documentary films featuring artists Gary Coyle, Natalia Beyliss, Laura FitzGerald and Sara Baume herself, as they consider their passions and rituals and what gives meaning to their days.

We’re also delighted that the inimitable fiddler Caoimhín Ó Raghallaigh will perform at the 2pm event on Friday, accompanying the authors Kerri Ó Dochartaigh and John MacKenna in conversation – sure to be a really exquisite event.

Also on the theatrical stage, Decadent Theatre will present award-winning play Eden, written by Eugene O’Brien in 2001, which enjoyed much success in the West End of London and Broadway in New York City for this story of stale love and fresh lust in the Irish midlands!

“I am delighted to be bringing audiences a programme of such breadth and interest as that reflected in the writers and artists contributing to LEAVES 2021.

“Their common grounds are the geographies of the places where they live, with which they associate themselves or which figure in their writing and which they so imaginatively share with us”, said Clíodhna Ní Anluain, Guest Curator of Leaves 2021.

Clíodhna Ní Anluain, is an arts and culture producer with RTÉ. She has also worked as a museum and event curator and as a theatre producer.

She is a published editor with Lilliput Press and New Island.  She is a board member and secretary of Visual Artists Ireland (VAI). Her intrigue with place, built spaces, and their richness as a source of curiosity has influenced her programming of LEAVES 2021.

LEAVES 2021 virtual online events include Bernard MacLaverty in conversation with Martina Devlin. Vona Groarke and Adrian Duncan are two highly accomplished artists in different fields who happen to come from the same area in County Longford.

The event Poetry, Prose and Place brings them together for the first time to explore a shared visual curiosity and perception which they manifest in various forms.

The programme will also feature workshops with writers Niamh Boyce and Arthur Broomfield and poetry events will take place in schools across Laois.

For tickets or to check out the full programme of events see www.leavesfestival.ie or  www.dunamaise.ie  . Tickets can also be booked directly from Dunamaise Box Office, Tel: 057 8663355.

Leaves Festival 2021, is brought to you by Laois Arts Office and Dunamaise Arts Centre and funded by Laois County Council, the Arts Council and Creative Ireland Laois.