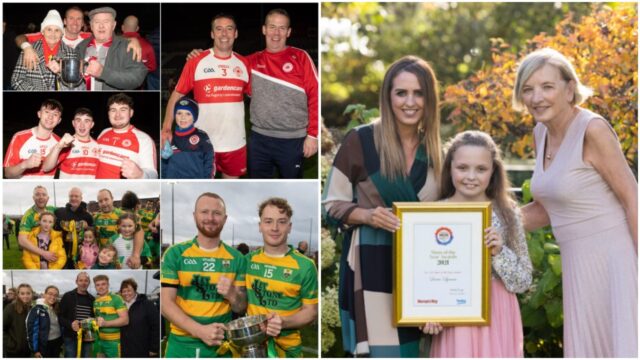 A Laois mammy has been crowned the Woman’s Way and Beko Mum of the Year for 2021.

Louise Lynam has scooped the prize from the largest and most recognised national awards.

The Portlaoise native was named ‘Mum of the Month’ for April in the Women’s Way and Beko Mum of the Year awards for 2021.

The Laois minor footballers will be managed by Conor Gorman from Clonaslee for the 2022 season.

Mark Bates had been in charge for the two Covid-disrupted seasons in 2020 and 2021 but stepped down after their Leinster quarter-final loss to Louth earlier this summer.

The process of finding a replacement was headed up by Laois GAA Coaching Officer Fergal Byron and Games Manager Mike Henchy and a number of interviews were held in recent weeks in relation to the vacancy.

Clough-Ballacolla’s defence of the Laois SHC goes on to the final as they came from behind to defeat Rathdowney-Errill last Sunday afternoon.

They had to do it the hard way too – losing a man to a straight red card in the final minute of the first half – but they were good enough to come back and win.

Jordan Walshe and Stephen Maher were deadly accurate for Declan Laffan’s charges with 15 points between them.

For a small club, Trumera get a lot of big days out.

Back in June they played in the delayed 2020 intermediate hurling final to Rathdowney-Errill; in July they were beaten in the Division 2 league final by The Harps.

And Friday night’s intermediate hurling final clash against Clough-Ballacolla was their fourth final appearance since 2015.

Despite less-than-ideal weather conditions, there was a great turnout on the day including two new recruits, Mick Fennell and Ben Conroy, two Laois Legends.

It was always going to take a top-class round to come out on top, and so it proved, with Joe Keenan showing he is just as adept with the golf clubs as he was on the playing field with a marvellous return of 44 points, just edging out John B Conroy, after a countback.

The fifth week of the Laois hurling championships has come to an end and another Team of the Week is here.

We had significant games in the SHC, Premier IHC, IHC and JHC over the weekend – and six clubs have been represented.

Last weekend was a good one for Laois’s small hurling clubs.

Ballinakill and Ballyfin qualifies for the Premier IHC final, Trumera won the intermediate and on Saturday afternoon in O’Moore Park, Ballypickas held off a late comeback from their neighbours Abbeyleix to claim the junior title.

It’s the second time since 2017 that Ballypickas have won this championship. They beat Rathdowney-Errill in a thriller that year but struggled at the higher grade and were relegated at the end of last season.

The death has occurred of Seamus Fleming, a native of The Swan, suddenly, at the age of 72.

Mr Fleming was stationed as a Garda Síochána in Monaghan for many years where he lived with his family and ran a driving school after his retirement as a guard.

In Laois he’s remembered as a wonderfully talented footballer with club and county throughout the 1960s and 1970s.

Three Laois rugby players have been selected on Ireland U-18 and U-19 squads.

Castletown’s Jim Peters and Rosenallis’ David Dooley have both been selected on the U-19 squad.

While Portlaoise’s Richard Whelan, a student in Roscrea, has been named on the U-18 Schools squad.

A fourth Laois player, Portlaoise’s James Conroy, has been placed on the standby list for the U-18 Schools squad as injury had prevented him from taking part in the recent inter-pro competition.

10 – Up and Coming: Meet the aspiring architect behind Bunlacken Brú at the foot of Cullohill Mountain

This week, we spoke to a Cullohill man who saw a gap in the market and turned it into a thriving family business.

Bunlacken Brú is the brain child of Eoin O’Sullivan and was established during the summer year.

Opening every weekend since July, Bunlacken Brú has received rave reviews – with Darina Allen of Ballymaloe Cookery School the latest to give it the seal of approval.