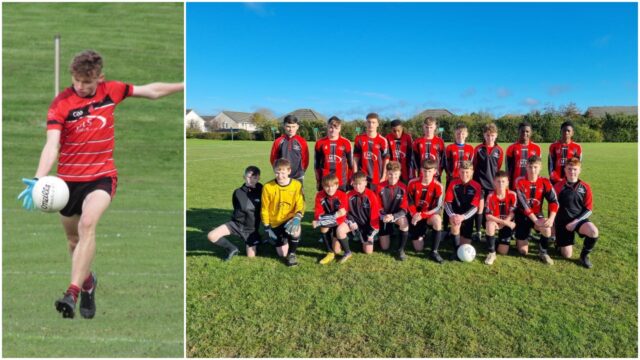 Portlaoise CBS made it two wins from two in the South Leinster Senior ‘B’ football league with an eight point success over Scoil Dara Kilcock.

It was a victory that puts them through to the semi finals of the competition.

They fell behind early on as the visitors struck for two goals to give themselves the lead.

But the CBS regained their composure with the excellent David Costello, who finished with ten points, sending over a series of points.

DJ White landed a brace while Daire McDonald smashed home a goal and followed that with a point.

The second half saw the CBS remain on top with Kieran O’Donnell, who ended the match with 2-4, popping up with two great goals.

James Devoy, Niall Kirby and Sean O’Sullivan all made big impacts from the bench as the CBS went on to win well in the end.

Portlaoise CBS were knocked out of the U-15 Cup following a second half comeback against St Finnian’s Mullingar during the week.

The CBS made a brilliant start as Nathan Lupoyo struck for an early goal.

But Mullingar were not disheartened and they won a penalty shortly after.

CBS keeper Josh Corbet made a brilliant save but the spot kick was retaken after the referee spotted an infringement and this was scored to level the game 1-1.

A few minutes later Liam Conroy scored a wonder goal from the half way line that lobbed the keeper.

Portlaoise CBS gained momentum then and Ben O’Connor scored goal number three. However, Mullingar grabbed one before half time to leave it 3-2.

But the visitors took control in the second half and scored four goals to claim a 6-3 win.