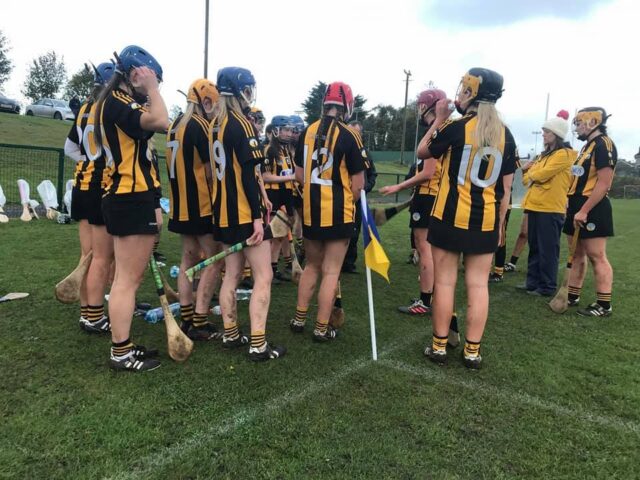 Camross are through to the Laois Camogie Intermediate final following a routine victory over The Harps in Abbeyleix this afternoon.

Anthony Coffey’s charges were in command from the throw in and ran out commanding 35 point winners.

Their victory sets up a repeat of the 2019 final against St Brigid’s – which Camross won.

Camross played with a gale force wind in the first half and they made it count.

Sarah Anne Fitzgerald and Kirsten Keenan got them underway with efforts from placed balls.

The Harps broke forward in the opening minutes and midfielder Rachel Bergin did really well to point against the wind – but sadly for them it would prove to be their only score.

Keenan, Fitzgerald, Sile Burke and Andrea Scully added further points for Camross before they were awarded a penalty.

Sarah Anne-Fitzgerald stepped up from centre back and rammed her shot into the bottom corner to leave it 1-7 to 0-1 at the first water break.

The second quarter continued in a similar fashion. Keenan added five more points to her tally, Andrea Scully landed a brace while Sara Cuddy also pointed in that period.

By referee Padraig Dunne’s half time whistle, Camross led 1-15 to 0-1 and the game was over as a contest.

Camross played against the wind after that but it made little difference as they added goals instead of points.

Kirtsen Keenan scored one from a long range free while the third came via Andrea Scully.

Keenan and Fitzgerald also slotted points to leave it 3-17 to 0-1 at the second water break.

Aimee Collier, who had been quiet, took over in the final quarter and scored three brilliant points.

Sara Cuddy added 1-1 to her tally while Keenan finished the game with 2-8 thanks to a bullet of the shot that flew to the net to finish the game.