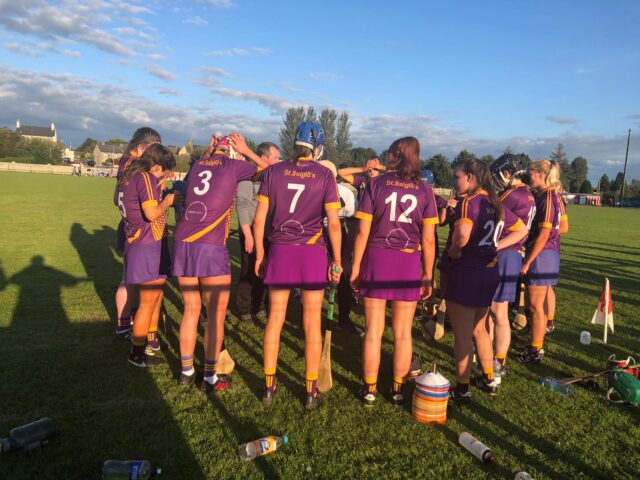 St Brigid’s looked dead and buried deep into injury time in Castletown this afternoon but for the last puck of the game that saw them reach their third straight final.

There was never much between them and O’Moore’s, who were defending champions, in very tough conditions.

O’Moore’s were up against the gale force wind in the first half and it was the women in blue who pointed first through Laura Marie Maher. St Brigid’s responded immediately through a great point on the run from Aíva Coss.

Throughout the first half, O’Moore’s utilised a great running game against the wind particularly through their main threats of Amy Loughman and Laura Marie Maher.

This meant O’Moore’s were playing better but struggled for scores as Brigid’s had an equal spread of dangerous players with Gemma Hoare and Aisling O’Dea firing over from play.

However, O’Moore’s nipped ahead on the 18th minute with a goal. A 45 into the wind from Laura Marie Maher fell short but Mary Keating caught the dropping ball and, despite being outnumbered, managed to kick O’Moore’s into a 1-4 to 0-5 lead.

But O’Moore’s would not score for another 17 minutes and Clodagh Tynan continued to pop the frees over.

Just before half-time, a great pinged ball from centre back Eimear Hyland found Tynan in space and she pointed once more to give Brigid’s a 0-8 to 1-4 lead at half-time.

Brigid’s purple patch continued after the break with Jessie Quinlan pointing but then the incredibly lively Laura Marie Maher took over for O’Moore’s.

Maher pointed a great free in the 35th minute and soon after finished a great team move with a monster point.

She then single-handedly won the resulting puckout and scored again as O’Moore’s roared back into the lead but Tynan replied with a free to level things up 0-10 to 1-7 at the water break.

At the resumption of play both sides struggled for scores but on the 52nd minute Tynan edged Brigid’s in front 0-12 to 1-8.

With full-time approaching and with O’Moore’s having a lot of possession the pressure kept building and Mary Keating popped up with a brilliant score to level the game.

In the 61st minute, Laura Peake’s hard work was rewarded with a 45 and Laura Marie Maher tapped it over to put O’Moore’s a point ahead.

But Brigid’s would have one more chance as Clodagh Tynan won the break from the puckout and was fouled.

Tynan launched the free to the O’Moore’s 45 where possession and the game was on the line. Aisling O’Dea did well to win the dirty ball but was blocked by Aoife Hyland.

But then came the heroine Eimear Guidera as she picked up the breaking ball and on the run fired it towards the O’Moore’s goals.

The sliotar flew through the cold hand of Amy Callaghan and into the back of the net.

The full-time whistle blew straight after and St Brigid’s sealed their place in their third successive final in the most dramatic way imaginable.