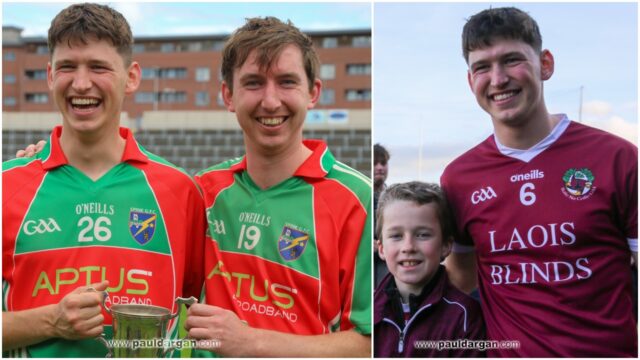 2021 has been a magical year for two Laois brothers who won three GAA championships between them with three different clubs.

Micheal and Sean Downey who hail from Spink in Laois played on three teams that went all the way this year.

They played together on the Spink football team that played the delayed 2020 Junior B football final in August.

That game was delayed due to Covid-19 and could not be played until the Laois hurlers – who had the aforementioned Sean plus Paul Simms in their ranks – had been eliminated.

Sean lined out at midfield in the game against Graiguecullen and scored a point while older brother Micheal chipped in win three points from wing forward.

While the brothers play football together, they play hurling for different clubs.

30-year-old Micheal hurls with Ballypickas and they reached the Junior A final at the end of October.

He excelled at corner back as Ballypickas saw off Abbeyleix by 3-11 to 2-9 and return to the Intermediate grade.

Sean hurls for Ballinakill and he was in action last Sunday in the Premier IHC final against Ballyfin.

He held the dangerous Eanna Lyons to just a point from play and hurled really well at centre back.

His side went on to record a 2-14 to 1-14 win and make an immediate return to the Senior ranks.

So the Downey brothers end 2021 with a pair of Junior B football medals, a Junior A hurling medal and a Premier Intermediate hurling medal.

That’s a very successful year all around!