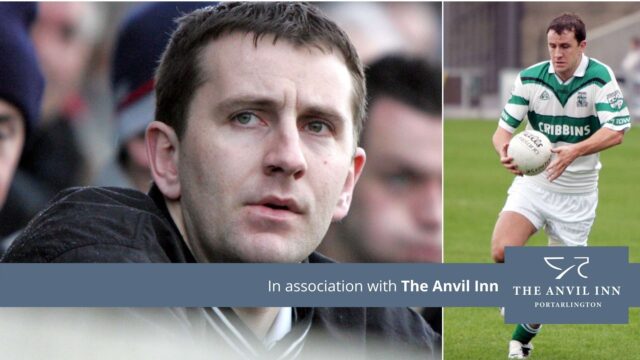 He played in his first one when he was 19 way back in 1997, won his first one in 1999 and was there right throughout an incredible era for the club, winning a selection of Laois championship medals as well as two Leinster finals and playing in the 2005 All Ireland club final.

He played in every line of the field for the club during an incredible career and was involved on the panel, and played with the intermediates, right up to two years ago. In one way or another he was part of a Portlaoise panel that won 15 county finals in a career that spanned over 20 years.

Now he’s wearing the Bainisteoir bib, although at first he was reluctant to take on the job when he was approached at first.

“I did indeed,” he said this week on the LaoisToday Talking Sport Podcast when he was asked did he have to think much about becoming manager.

“I was approached about it and initially said I wouldn’t take it. I wanted a break from everything.

“Then I got a call from Paul Cahillane one night and went and met a couple of the players and they kind of roped me back in towards going for it.

“When the players of that calibre, him, Kieran Lillis, Gareth Dillon come to you and ask you, it’s hard to turn them down when you’ve been with them so long in dressing rooms and training.

“I knew it wasn’t going to be an easy task with the changeover with who had left. We were the top dog for years and it was going to happen at some stage where teams were going to catch up to our level.

“It was never going to be an easy job to take over. But the lads came to me and decided I’d give it a go.”

Playing was always a huge attraction for him and being manager when the club entered a phase of transition after a golden era would have been easy to swerve.

But he never shirked a challenge as a player and though Portlaoise endured a disappointing season in 2020, losing to Portarlington and then Emo, and then another setback when they lost to Courtwood in the opening round this year, they have turned things around considerably since.

“(After the Courtwood game) we were out of the main championship and in the next game against Ballyfin we were 30 minutes from going to a relegation game.

“The lads have fought through every game since and I can’t fault them for that.

“We’re now at the other end where we’re 60 minutes away from being champions, which is amazing having been in that position at the start.

“We have a good core of lads who are experienced. They know how to get through games.

“We’ve probably won championships over the last 10 years where we haven’t performed to the best of our ability but lads have fought on their backs to win those medals.

“That’s the way they are, they just have that built into them and I hope the younger generation coming through see that and can learn from that and move things on themselves.

“You couldn’t fault them how they’ve gotten over those hurdles to be where we are right now.”

He acknowledges that Portlaoise found form in the semi-final win over Ballyroan-Abbey in what was their best performance of his two-year tenure so far.

But he knows that Portarlington will be the stiffest challenge they’ve faced yet.

“They are favourites and unquestionably favourites,” he says.

“They’re county champions, league champions, they’ve beaten us twice in the last two years in the league final and in the championship. So we have a tough, tough battle.”