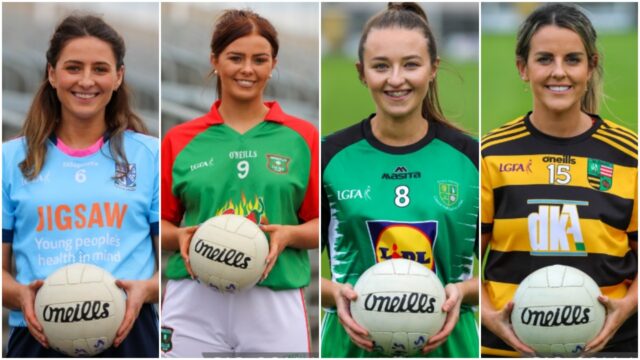 The Laois Ladies domestic calendar will come to a conclusion on Sunday in Portarlington.

The Intermediate and Junior football championships are down for decision in what promises to be two exciting games.

The action gets underway at 11am with the eagerly anticipated meeting of Ballyroan and Graiguecullen in the Intermediate final.

Ballyroan have looked like the team to beat at this grade for the last two years – although it didn’t work out that way in 2020.

After winning all their group games, they came unstuck against eventual champions Shanahoe in the semi final last year.

However, they repeated that group stage trick this year but didn’t falter in the semi final – giving St Joseph’s a trimming in the process.

Kate Whelan has been their highest scoring forward to date while Faye McEvoy and Laois’s Andrea Moran are the engine room in midfield.

With Emily Mulhall, Clodagh Dunne and Rachel Fitzgerald also flying, there is a lot to like about this Ballyroan team.

Standing in their way are a team who are looking to emulate what St Paul’s did a few years ago – win back-to-back championships.

In September 2020, they triumphed against Ballyfin in the Junior final and have taken to life at this level like a duck to water.

They defeated Park-Ratheniska, Clonaslee and St Joseph’s in the group phase to finish second behind Sunday’s opponents who defeated them.

Their semi final win over Park-Ratheniska was very impressive – as their opponents were highly fancied to win this competition out.

In Kelly O’Neill, Graiguecullen have a real star in the making as the youngster has been their main attacking threat once again this year.

While the likes of Sara Kerfah, Caoimhe Kelly and Georgina Donovan have also played very well.

With fantastic work going on at juvenile level in Graiguecullen, it seems inevitable that they will become senior sooner rather than later.

However, Ballyroan’s extra experience may prove the difference here in the end.

The second final on Sunday throws in at 1pm and it will see The Heath face Ballyfin in the Junior final.

This will be a fifth successive final for Ballyfin at this grade as they have lost the last four deciders.

In 2017, Ciara Langton and Martina Dunne were on fire as St Joseph’s got the better of them.

Ballyfin pushed St Paul’s close in 2018 but were then blown out of the water by Clonaslee in 2019.

2020 saw them reach a fourth successive final but once again it was the same outcome as Graiguecullen triumphed.

So if ever a team deserved to win something, it is Ballyfin – but sport doesn’t tend to leave much room for sentimentality.

The Heath are the second most decorated club in Laois with 11 senior titles – albeit their last came all the way back in 1989.

They have reached the last two semi finals of this competition and lost but broke that crux by defeating Portlaoise by 3-8 to 1-9 in the semi final.

Forward Lisa Keane has been impressive for them while Anna Lalor and Aisling Fitzpatrick have continued their good form that they showed with the Laois minors.

Ballyfin had a big win over Killeshin in their semi final with the O’Rourke sisters, Niamh, Sinead and Aine all having fine games – along with Liadan C-Fennell.

When the sides met in the group stage, The Heath ran out 1-13 to 2-3 winners after a dominant first half display gave them the cushion to see out the win.

Expect the final to be closer but perhaps The Heath will come out on top once again.