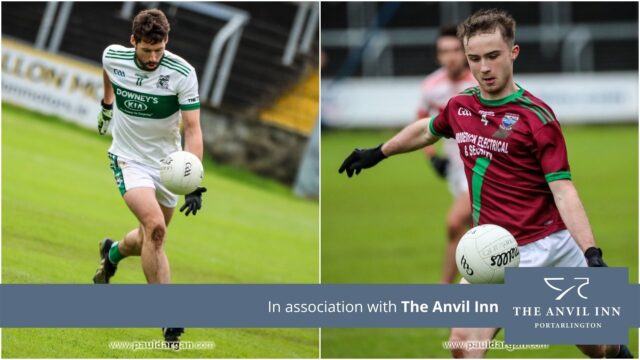 Even in the relatively recent history of Laois senior football finals, it’s hard to recall a game where Portlaoise came in as the outsiders.

This is their 14th final appearance in 15 years and on each of those previous occasions they were unbackable favourites. They may have been beaten by Stradbally in 2016 but they were overwhelmingly fancied to win that one and do the 10-in-a-row.

Going back to 2005 and Stradbally didn’t come in as no-hopers having beaten Portlaoise in the group stages that year, but Portlaoise had still been All Ireland finalists in March of that year.

Perhaps the 2002 final between Portlaoise and St Joseph’s was the last time the club didn’t rock up to O’Moore Park on county final day as the clear cut option.

Today? It’s arguably the most attractive county final in a long time. Portarlington, seeking a second Laois SFC success in three months and a club that have been dominant at underage level, coming up against the county’s most successful side ever.

At the start of the year this is the final you’d have picked as the one you most wanted to see.

When Portarlington won the 2020 final back in August, they had 11 points to spare over Graiguecullen; they beat Ballyfin by 10 points in the semi-final a week earlier. When the earlier rounds were played they’d beaten O’Dempsey’s, Portlaoise and Stradbally and hadn’t conceded a single goal.

In all, in these two campaigns they’ve played nine games and given away just one goal. Across the two years their average winning margin has been almost seven points per game.

Portlaoise, on the other hand, have stuttered and stumbled and have been beaten three times in championship games in these two seasons.

Portarlington delivered the first blow in last year’s Round 2 game; Emo knocked them out in the quarter-final; and then Courtwood stunned them in the opening round this year.

Three losses in two seasons. Prior to that Portarlington loss in 2020, they’d lost just three games in 11 years.

But despite the slippage, they’re still here. They battled through tough tests against Ballyfin, St Joseph’s and O’Dempsey’s. Lesser clubs would have fallen at one of those hurdles.

They gave their best performance in the semi-final when they had 14 points to spare over Ballyroan-Abbey and they seem to have settled on their best team, one that has an incredibly strong spine to it.

Kevin Fitzpatrick might be new to the manager’s role but this will be his 19th time to experience county final day; among those alongside him are Bruno McCormack and Pat Critchley, two of the club’s greatest ever servants.

“The Town don’t lose finals,” is a mantra you’ll have heard. It may not be 100% true – as Portarlington manager Martin Murphy, for one, can attest to – but there’s something to it that collectively gives Portlaoise strength.

They’ll also fancy themselves to at least break even in most of the key individual battles.

At one stage, Port looked well ahead of the chasing pack. But that gap immediately closes when it’s Portlaoise they’re facing. They also appear to have gone off the boil somewhat from the side that excelled in the 2020 final.

While they haven’t looked in any real danger in any of their games, they don’t appear to have the same energy about them. It’s been a long road they’ve been on and winning the 2020 final, as well as the league final 10 days later, was a considerable high. Getting back to that level again has been understandably difficult.

But while their semi-final against Emo was still alive as a contest heading into the final ten minutes, a small bit of luck in front of goal and they’d have had as big a winning margin as Portlaoise did against Ballyroan-Abbey.

Had that been the case we wouldn’t have the same doubts about Port. But perhaps that was a valuable lesson for them.

They know that if they’re to beat Portlaoise they’ll need to put in the collective best performance of their lives.

And they have it in them. A quality goalkeeper, an excellent defence and midfield and a handful ofbrilliant forwards that can turn it on.

There will be fascinating duels all over the field – Frank Flanagan, Chris Finn and Gary Saunders will be Portlaoise’s main fire fighters with the Murphy brothers, Jake Foster and Ronan Coffey in their sights. Limiting Rioghan Murphy and Adam Ryan will probably be the duty of Kevin Swayne and Paddy Downey or David Holland.

The midfield clash of Kieran Lillis and Ciaran McEvoy against Sean Byrne and Keith Bracken will also be vital and you’d imagine Port will do all in their power to limit Lillis’s influence in particular. Handle him and Portlaoise’s inspiration could be cut off at source.

The other vital concern for Portarlington will be how they manage Gareth Dillon. He gets on an amount of ball, is a great playmaker and invariably pops up with a couple of points from play. If they can win that battle, then each subsequent duel comes back in their favour too even if Conor Boyle, Damon Larkin and Benny Carroll are top operators too.

Even though conditions will be better than you could hope for in mid November, don’t be surprised if it’s low-scoring.

With goals at a premium, the side that gets any bit of a lead will be hard to overtake. This could be won with 10 or 11 points.

For us, Port have more credit in the bank. They’ve been comfortably the best side in the county for two years now – and they were equal to Portlaoise in 2019 though lost a controversial semi-final.

Portlaoise, honest and all as they’ve been, have been beaten by Courtwood and Emo in the past year, two sides Port were comfortably stronger than. Does one comprehensive win over Ballyroan-Abbey banish all of the questions that previously existed about them?

Portlaoise are more than capable of getting it right at this time of year – and are well conditioned to November football from their various Leinster club campaigns – but Portarlington have a group of players that are fit to win more than just one championship.

The window to win multiple titles will be shorter than they’d think. Today is a huge opportunity to go back-to-back.

They can take it. Portarlington to win.

Jake Foster has become a more prominent player for Portarlington with each passing season and has been excellent in the 2021 campaign with 0-19 to his name so far, just ahead of Colm Murphy who has 0-17.

Nine of his points have come from frees and there has been one mark but it’s impressive shooting in just four games.

Portlaoise’s scoring has been spread across a number of players in this championship but it’s Paul Cahillane who leads the way with 1-11, 0-7 of it from frees. Damon Larkin is just behind him on 2-7, all of it from play, with his goals coming in the narrow wins over Ballyfin and St Joseph’s.

Having already won three senior football championships in Laois as a manager (with Stradbally in 2005 and 2016 and Portarlington in 2020), the Gracefield native can now become one of the most successful club managers ever in Laois by putting a fourth title to his name.

By our county Kevin Fitzpatrick has been involved with the Portlaoise senior footballers on county final day on an incredible 19 occasions in the past.

His first final appearance as a player was in 1997 when Portlaoise lost to Stradbally but he won his first medal in 1999 and followed up with further successes in 2002, 2004, the nine-in-a-row team from 2007 to 2015 and again from 2017-2019. In more recent years he was a sub on those teams but a very influential figure around the panel.

All of the Portarlington players will be playing in their second county final in three months – with Paddy O’Sullivan, who was injured for that game, the only different starter as he has replaced Jason Moore on the half back line since Moore went overseas on army duty.

For Portlaoise it will be a first final start for the likes of Ben Dempsey, Kevin Swayne and Ronan McEvoy while a handful more could make sub appearances.

At the other end of the scale, the vastly experienced Kieran Lillis is in line to start his 13th final. His first final start came in the 2008 decider against Timahoe and he has featured in every final since with the exception of 2020.

Like the Clough-Ballacolla hurlers last week, the Portarlington footballers are seeking to win a second Laois senior championship final in three months.

But in Port’s case they did achieve this feat before – way back in 1955. On that occasion they won the delayed 1954 final in March of 1955 and then followed that up in October by winning the 1955 championship.

Amazingly they also won the intermediate final in 1955 and in 1956 the club fielded two teams in the senior championship. Alas, both teams were in the first round in 1956.

Portarlington are 4/6 favourites while Portlaoise are priced at 13/8 and the draw is at 13/2.

Graiguecullen referee Brendan Hickey is the man in the middle as he takes charge of his first ever Laois final. He did referee the Kildare final in 2010 but has since switched to the Graigue club and has been on the club refereeing circuit in the past couple of years in Laois.

Already this year he has refereed Portarlington in their championship games against Emo and Courtwood as well as the relegation playoff game between Arles-Killeen and Ballylinan.

Match tickets can be purchased on this link here and are priced at €20 for adults. Children U-16 go free. The game is being streamed live by Laois GAA TV and is available to purchase for €15. The price includes coverage of both the junior final between Barrowhouse and Ballyroan-Abbey as well as the senior final.