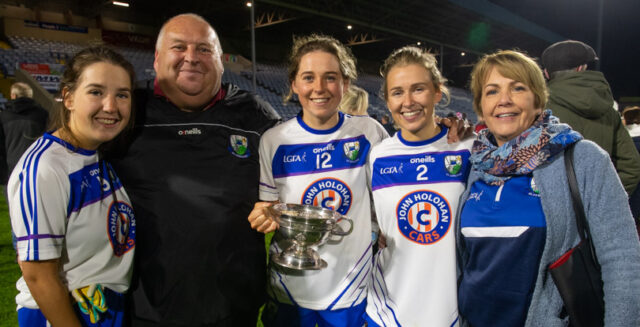 The St Conleth’s ladies footballers will be hoping their brilliant 2021 season can continue in McCann Park in Portarlington this afternoon when they welcome Wicklow champions Tinahely for the opening round of the Leinster club championship.

Standing in their way today is the seven-in-a-row Wicklow winners Tinahely, who were only crowned Leinster intermediate champions back in the summer.

They are a dominant club in the county and also won the junior grade when the Wicklow finals were played a couple of weeks ago. In the senior grade

They were comfortable 3-12 to 2-5 winners over St Patrick’s in the Wicklow final two weeks ago with the scoreline barely doing justice to their dominance given that they led 2-7 to 0-1 at half time.

But St Conleth’s have undoubted quality themselves and Noel Whelehan’s side will be keen to build on an historic first Laois senior title.

For a handful of their players, they can recall the magic of the 2010 season when they went all the way to the All Ireland club intermediate final after being successful in Laois.

On that occasion, after beating Killeen in the Laois final, they had home games against Baile Ceatharlach of Carlow and Westmeath’s Garrycastle before beating Stabannon of Louth in the final, after extra time, in Clane.

From there they went to Casement Park in Belfast where they beat St Gall’s of Antrim in a thrilling All Ireland semi-final before losing to West Clare Gaels in the final in Nenagh.

It was an adventure that they’ll never forget.

“The younger girls on the team will tell you that the the older girls that are still around from that year –  it’s all we ever talk about,” laughed full-back Aimee Kelly when chatting on a recent LaoisToday Talking Sport Podcast.

“It was a brilliant year,” added Aoife Kirrane who scored two points in this year’s senior final and was in her debut adult season back in 2010 as a 16-year-old.

“We won the intermediate in Laois and we were delighted with that. It was my first year playing senior.

“We got great support that year. We went on and won Leinster and I think Timahoe won the senior Leinster – there was a big Laois crowd at the two Leinster finals.

“We’d a brilliant year, a lot of success and we thought that it was great, this senior football, all this success. But we had a few dry spells so it was great to get to a senior final this year.”

“I think we lost four semi-finals in a row the last few years,” added Niamh Cullen on that same recent podcast and who was also on that 2010 side.

“We were in every semi-final since we came up (after winning intermediate in 2016).

“We had some great managers and great teams but never got over the line. Whatever happened this year, we got there. We knew we had it in us.”

Now they start on a new journey with a home game again in the Leinster championship.

You can listen to the recent St Conleth’s ladies football Talking Sport Podcast below.