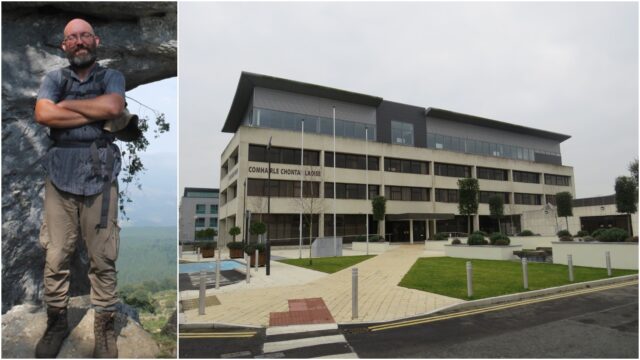 Laois County Library has commenced its third Historian-in-Residence programme with the appointment of Terry Dunne to the role.

The aim of the residency is to reflect national policy on commemorations at a local level, bringing to life the experience of all sections of Laois society a hundred years ago.

Utilising the resources and archives of Laois County Library, Terry is developing a research and engagement programme that will explore various aspects of Laois history in the revolutionary period.

The residency is supported by the Department of Tourism, Culture, Arts, Gaeltacht, Sport and Media and Laois County Council under the Community Strand of the 2021 Decade of Centenaries Programme.

Terry Dunne has a Doctorate in Sociology from Maynooth University. His doctoral research included an examination of social conflict in Laois in the 1820s and 1830s.

He has published widely on agrarian social movements in the Irish past and hosts a blog on the topic.

In Maynooth Terry worked with Professor Laurence Cox, specialising in the study of social movements, meaning a range of collective action from protests through to revolutions.

Terry is an avid supporter of public history and was formerly the chairperson of Castledermot Local History Group. He is a native of Kilkea in Kildare, only a few miles on the ‘wrong side’ of the Laois-Kildare border.

Terry’s academic work has been published in journals such as Critical Historical Studies, Éire-Ireland, Saothar and Rural History.

He has also written on his research for more accessible publications such as the Old Kilkenny Review, History Ireland and Rabble.

He is currently editing a collection of essays with Dr John Cunningham of NUI Galway, entitled ‘Spirit of Revolution.’

The collection looks at the Irish Revolution from below examining local cases of popular mobilisation. This is due to be published with Four Courts Press in the spring of 2022.

Engaging in new research on the Laois experience of the Irish revolution, Terry will focus less on the militaristic aspect and more on the mass mobilisation of ordinary people and local stories of revolution in Laois.

His forthcoming series of short articles will look at such topics as the labour movement in Laois, Gaelic League activism and the role of public space and public buildings in the story of how Maryborough became Portlaoise.

His first article is available from Friday 19th November on the Laois Local Studies website. https://laoislocalstudies.ie/articles/