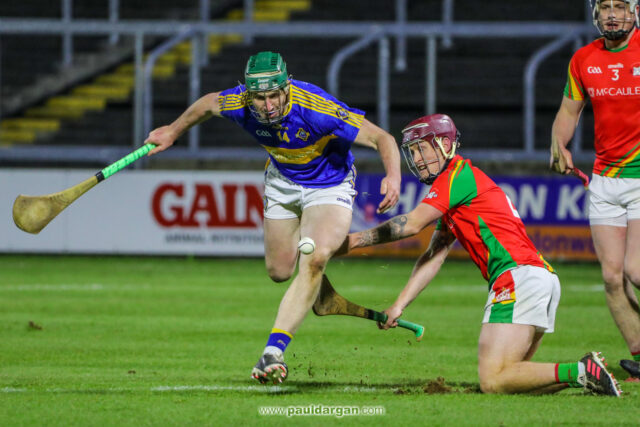 The big days keep on coming for the Clough-Ballacolla hurlers.

As if winning two senior county finals in the one year wasn’t enough, they’ve also seen Stephen ‘Picky’ Maher and Willie Dunphy crowned 2020 and 2021 players of the year respectively, won a first ever game in the Leinster club championship – and have Dunphy’s wedding to look forward to this Friday.

His honeymoon is set to clash with the Leinster club semi-final against Kilmacud Crokes on Sunday week, meaning some re-arranging might have to be done.

Dunphy and Maher reflected on their great win over Raparees of Wexford on Saturday evening in an interview after the match with Jack Nolan.

“It was hard to warm up the body for the first half,” said Maher of the bitterly cold conditions.

“We knew we were playing against the wind so it was a matter of staying in the game.

“Every point we got was crucial in the first half. Thankfully we went in level with them at half time and we kicked on from there.

“I think we were down 0-8 to 0-4 and we got the next four scores of the game and went in level. It was great going in level and to have the wind at our backs in the second half.”

Maher’s goal after the break was a big moment and it came in for high praise from Dunphy.

“We were very glad of it,” said Dunphy. “A cheeky enough finish and it was a great start to the second half. It was badly wanted at that stage.

“I’d say 57-58 minutes on the clock there wasn’t much in it but we kicked away in injury time, we got that six point lead and we knew we were in the driving seat at that stage.”

“Going to concentrate on wedding now for the next few days,” he said.

“I know we’re out in two weeks (against Kilmacud Crokes) – I’ve a honeymoon booked. We’ll cross that bridge in the next few days.”

“It has been a great year and we don’t want it to stop here to be honest,” added Maher.

“We’re going to give this Leinster semi-final a good rattle.”

Kilkenny giants Ballyhale Shamrocks play Carlow champions Mount Leinster Rangers in the other quarter-final game this weekend with the winners of that to meet St Ryanagh’s of Offaly in the other semi-final.