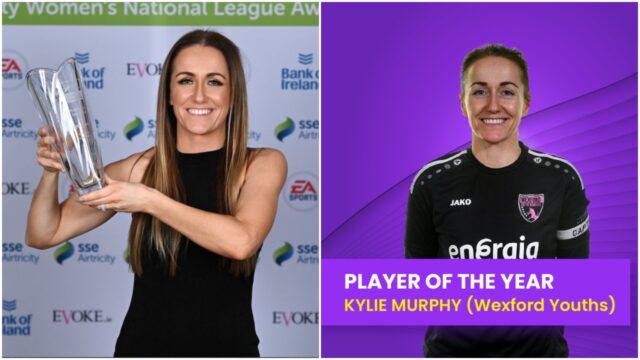 A Laois soccer player has been named Player of the Year at the 2021 SSE Airtricity Women’s National League Awards.

It is the first time in her career that she has been named as the best player in the league.

While Murphy has also been selected up front on the Team of the Year for 2021.

Wexford Youths finished third in the league but went on to win the FAI Cup final.

In front of the biggest every attendance at a cup final in Tallaght Stadium, Murphy was on the scoresheet in a 3-1 win.

Due to restrictions around COVID-19, the Awards ceremony could not take place so a special show – hosted by Máire Treasa Ní Cheallaigh and Shane Dawson – was shown live on LOITV.

Murphy spoke proudly of her club that she has lead with distinction for so many years. Rounding off the night, she summed up the Youths perfectly.

She said: “It’s hard to put Wexford Youths into words. You just can’t know it until you’re part of it.”