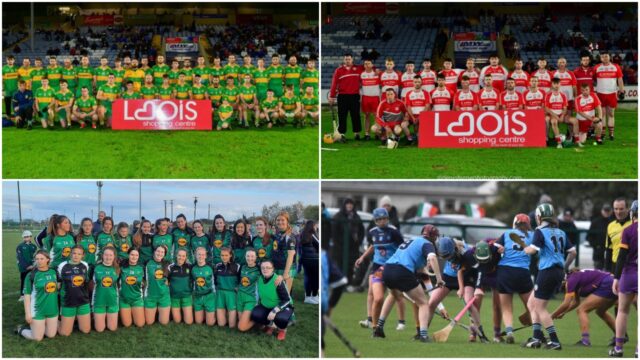 It was a disappointing day for Laois teams in Leinster competition as all four of them were knocked out.

Trumera’s Leinster adventure is over after they lost out by eight points to Maynooth in Clane today.

Damien Walsh’s men were level at half time but couldn’t keep with the hosts in the second half.

This game was delayed for a week due to Covdi-19 cases in Maynooth and the first half was very even.

Dylan Lalor and Adam Kirwan were among the Trumera scorers while David Qualter kept Maynooth in touch.

It was 0-5 each at half time and the score was deadlocked 0-8 apiece after 48 minutes as Adam Kirwan fired over three more points.

However, Maynooth began to exert their dominance where a Graham Kenny goal helped them move 1-12 to 0-9 ahead at the second water break.

Veteran Joey Coogan came off the bench and rattled the net in the 50th minute to cut the deficit to three.

Adam Kirwan made it a two point game soon after but Maynooth didn’t panic.

Tadhg Forde, David Qualter, Ronan Dunne and Cathal McCabe as they won by eight points in the end.

Ballyfin Ladies’ remarkable 2021 has been ended by Colmcille in Mountmellick this afternoon.

Ken Farrell’s charges were up against the Longford Intermediate champions and although they battled well, they succumbed to a five point loss.

Nevertheless, they will have very fond memories of a year which saw them win Junior in Laois and then win two provincial games.

Ballyfin were playing against the breeze in the first half and only managed an Edel Finn point in the opening quarter.

They were unlucky not to have a goal too as Chloe Scanlon rattled the crossbar with a rasper of a shot that was then somehow cleared off the line by a Colmcille defender.

They led 1-3 to 0-1 at the first water break and although Scanlon pointed in the second quarter, Colmcille were rampant and built up a 1-9 to 0-2 lead.

Former Republic of Ireland and AFL player Michelle Farrell, who is a current Longford senior, was pulling the strings in midfield for the visitors and was very impressive.

To their credit, Ballyfin kept battling in the second half and held their own with Colmcille.

Chloe Scanlon added three points to her total but Colmcille kept ahead to win well.

Elsewhere, O’Moore’s lost out in the 2020 Leinster Intermediate Camogie semi final to Celbridge of Kildare.

Dermot McGill’s charges stages a dramatic late comeback but just came up one point short in the end.

Celbridge led 0-4 to 0-2 at half time and a goal in the tenth minute of the second half left them five points ahead.

However, O’Moore’s fought back and there was just a point between them as the game entered five minutes of added time.

Laura Marie Maher was excellent in this phase as she reeled off point after point for her side.

But the equalising point just wouldn’t come as O’Moore’s went down by 1-7 to 0-9 in the end.