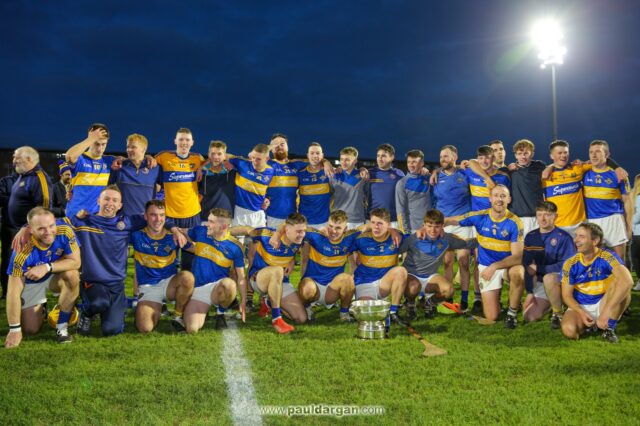 Clough-Ballacolla are off to Croke Park after they defeated Kilmacud Crokes in O’Moore Park this evening.

Declan Laffan’s charges were immense once again as they upset the odds and qualified for the Leinster final next Sunday.

It was another amazing performance with Stephen Maher once again leading the way 1-8 of their total.

Clough-Ballacolla are the first Laois team since 2001 to reach a Leinster final and will play either Ballyhale Shamrocks of Kilkenny or St Ryanagh’s of Offaly.

The first half began like a train with four points in the opening three minutes of the game.

Stephen Maher and Stephen Bergin were on target for Ballacolla in between efforts from Ronan Hayes and Caolan Conway for Kilmacud Crokes.

And a minute later we had a goal. An excellent ball from Robbie Phelan resulted in Stephen Maher shrugging off his man and burying the ball into the net.

Fergal Whitely replied for Kilmacud but Ballacolla got the next four points with Maher scoring three and Stephen Bergin pointing again to open a big lead.

Cian O Cathasaigh finally responded for Kilmacud but they trailed 1-6 to 0-4 at the water break.

The second quarter was tit-for-tat with Kilmacud possibly shading it but their shooting let them down as they fired six wides in the first half alone.

Oisin O’Rorke, Whitely and Hayes did manage to score for them but Jordan Walshe, Aidan Corby and Stephen Maher replied for Ballacolla.

That left the Laois side 1-9 to to 0-8 at half time and half an hour away from a Leinster final and Corke Park appearance.

Caolan Conway and Stephen Maher traded points when play resumed and it stayed that way until the 43rd minute when a loose ball broke to Oisin O’Rorke who rattled the net for Kilmacud Crokes.

Maher replied with a free but sub Mark Howard fired over from a tight angle soon after.

We went ten minutes without a score then before Stephen Bergin made it a three point game with a screamer.

Kilmacud tried to respond through Ronan Hayes but Maher replied again and Ballacolla saw out three minutes of injury time to win.