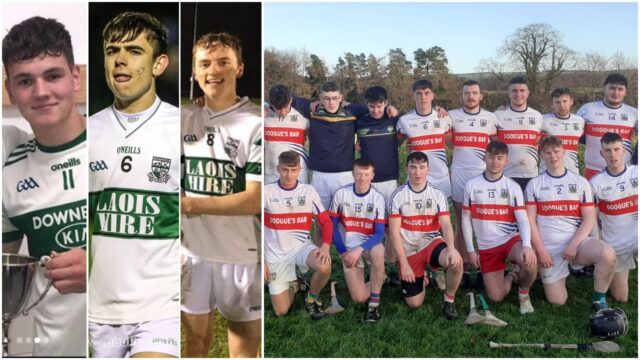 The penultimate Laois GAA competition of 2021 is down for decision in Ratheniska this afternoon.

Portlaoise and Raheen Parish Gaels are set to meet in the U-20 ‘B’ hurling championship final.

Raheen Parish Gaels consist of Cost-Shanahoe, Trumera and Clonad and have a member of each club as part of their management.

Tony Ryan, Damien Lalor and David O’Brien lead the amalgamated side who have won two games to reach the final.

They began in the quarter final with a 3-13 to 2-12 victory over Park-Ratheniska-Timahoe.

Then last weekend, they were involved in a titanic tussle with Ballinakill-Ballypickas in the semi final.

That game went all the way to extra time where Raheen Parish Gaels emerged 2-19 to 1-15 winners.

As for Portlaoise, they will be attempting to win a hurling and football double over the next six days as they contest the ‘A’ football final against Ballyroan-Abbey next Saturday.

Ciaran McEvoy and Frank Flanagan are managing this team and they have also won two games to date.

They enjoyed a 4-15 to 3-11 quarter final victory against Clonaslee on November 24.

Portlaoise then faced Rosenallis in the semi final where they were 4-16 to 0-13 winners.

Conor Brown is an injury doubt for the game while Barry Fitzpatrick, a minor with Laois this year, is one to look out for.

Raheen Parish Gaels bring a lot of adult experience into the final as a number of their players have played at the highest level in their club.

Mossy O’Connor and Dylan Cuddy hurled for Colt-Shanahoe – with the latter also seeking a rather unique double as he plays football for Ballyroan-Abbey.

While James Whelan, David O’Brien and Fionn Holland all played for Clonad – the latter of which also represented Laois at U-20 level in football and hurling this year.

An exciting encounter is anticipated and don’t be surprised if this one goes all the way to extra time.