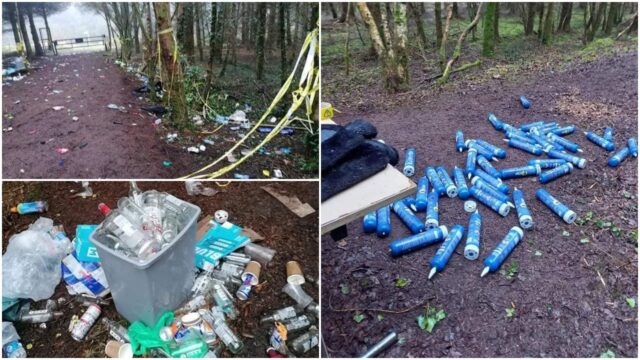 A popular tourist spot on the Laois-Offaly border was the scene of an ‘illegal drug and drink rave’ over the weekend.

Derryounce Lakes and Woodlands in Portarlington was descended upon by a large number of people who engaged in anti-social behaviour.

Volunteers at Derryounce Lakes and Woodlands arrived on Monday to find the woodland littered and empty cans of nitrous oxide strewn on the ground.

Sinn Fein Councillor Aidan Mullins, who is the chairperson of the Derryounce committee, said this event bares similarities to what happened to a house in Stradbally around this time last year.

It is organised and people purchase tickets attend the event where they are then supplied with a Google Maps link or an Eircode which instructs them where to go.

Cllr Mullins revealed how considerable disruption was created as a result – with two ambulances and the fire brigade called to the area on Sunday.

He said: “It certainly seems to have been an organised rave from outside the area – most likely Dublin – where people pay money to attend.

“About 100 or more are believed to have turned up. Whoever organised it had food, tables, the area cordoned off and the cans of nitrous oxide all supplied.

“Two ambulances had to be called out and we believe that three people were subsequently taken to hospital.

“The fire brigade was called because a couple of people got lost and were subsequently found freezing and had to be brought to hospital.”

Derrounce volunteers arrived on site and gathered up all the rubbish on Monday – which Offaly County Council will take away today.

Cllr Mullins said: “As can be seen from the photos, they were taking more than drink.

“Our volunteers were left to clean up after these shitheads.

“Thankfully there was no infrastructural damage done, but a big clean up was required and now Offaly County Council will come to take away what was gathered up.”