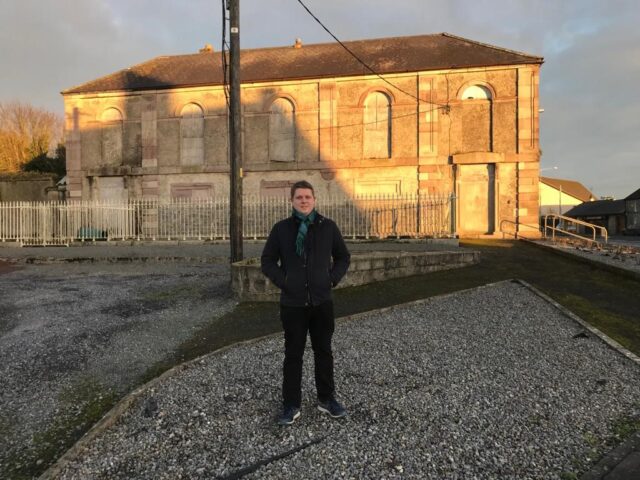 The derelict Borris-in-Ossory courthouse has been granted over €210,000 in government funding to help restore the derelict building and develop it into a remote working hub, community centre and local area office for Laois County Council.

€212,332 has been secured under Category 2 & 3 of the Rural Regeneration Development Fund, announced by Minister Heather Humphreys this morning.

An Cathaoirleach of Laois County Council and local Fine Gael Councillor Conor Bergin, who is from Borris-in-Ossory, welcomed the news.

“Today’s announcement means that Laois County Council have gotten the green light from the Department for Phase 1 of the project which will include the development of detailed plans and tender documents for the renovation and reuse of the former courthouse,” he said.

“This is great news and a huge project which will transform the derelict courthouse building on the Main Street in Borris-In-Ossory into a modern multi-purpose facility, managed by Laois County Council.

“Ambitious plans are being considered by the Council for the old Courthouse, which it is hoped will include a remote working hub, community centre and local area office for the Council.

“The renovated courthouse will be served by high-speed fibre broadband, and I am hopeful that it will also have a state-of-the-art meeting room which will be available to community groups and local clubs in the area.

“There has been a need for a new community centre in Borris-In-Ossory for years to support the many local clubs in the area, such as the Youth Club and Community Development Association.”

Cllr Bergin adds that the overall renovation cost is estimated to be over €1 million and that Laois County Council will apply for further funding under the next round of the Rural Regeneration Development Fund.

“I am delighted however to confirm that the wheels are in motion with today’s announcement by the Minister, and the Courthouse will finally be renovated after almost 20 years of being a derelict building.

“The development of a remote working hub to accommodate people working in the public sector in the Courthouse is directly in line with the recent strategy announced by An Tanaiste, Minister Leo Varadkar to enable more public servants to work remotely, particularly in rural areas.

“I believe that this project will have massive benefits and help revitalise the village in Borris-In-Ossory, which has suffered from dereliction and unemployment in recent decades and could act as a prototype to be rolled out in other rural villages around the country.

“’The courthouse building itself has a significant place in local history in Borris-In-Ossory and is part of the heritage of the area, having being originally constructed in 1835.

“According to local tradition Charles White, the High Sheriff of Laois insisted that the courthouse should be built facing in the direction of his home at Charleville, in the parish of Ballaghmore. ‘Petty sessions’, as they were known operated in the Court in the early 1900s and it held the status of District Court until the late 1960s.

“The original courthouse roof was burned off during the War of Independence in 1921.

“The premises have been derelict for almost 20 years and this project will hopefully both renovate a derelict building in the village and provide a 21st century state of the art community centre and new remote working facility.

“It is envisaged that once the courthouse is fully renovated, the Laois County Council area office will relocate back to the building – meaning that the Council once again have a permanent base in the village.

“It is hoped that design and tender works for the Courthouse will begin immediately and continue throughout 2022. I will continue to work closely with Laois County Council on this issue, as I have since I was elected in 2019,” Cllr Bergin concluded.

“I am delighted that the Government has granted over €200,000 to help restore the old Courthouse at Borris in Ossory, added Deputy Charlie Flanagan in a statement.

“More than most villages in Laois, Borris-in-Ossory has for suffered dereliction both public and private properties and both local Councillor Conor Bergin and myself have been working to assist in the regeneration of the village.

“The old Courthouse is a landmark building and Laois County Council can now proceed to restore the building which will be used as a remote working centre for the area.”

“Regenerating our landmark buildings and keeping them in use makes good sense as we prioritise town centres,” added Minister Pippa Hackett.

“It’s a crying shame to see them going derelict so I’m delighted to see projects in my constituency included in this funding.

“The renovation of Borris-in-Ossory courthouse for remote working and community use makes perfect sense. I’m also delighted that Edenderry is to get a new community library, which will also provide opportunities for future development of community, leisure and cultural facilities.

“The vacant secondary school in Ferbane will be developed, along with the reuse of the existing Library and Heritage Centre. This is all very good news for Laois and Offaly.”