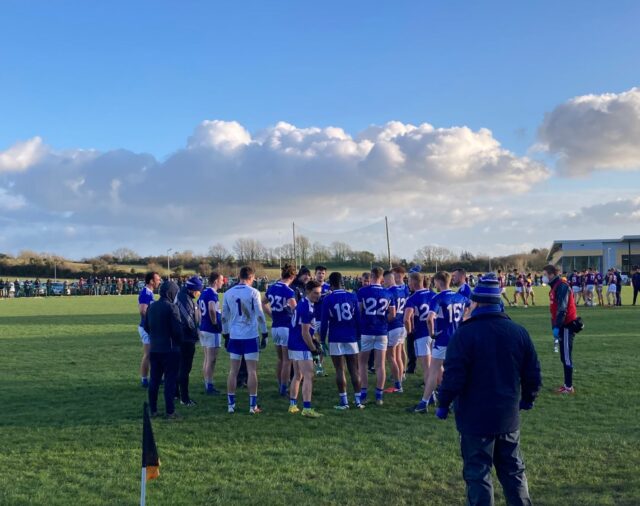 A 15-point loss was not the ideal way for the Laois footballers to begin the 2022 season but that’s the start they got in the Shelmaliers GAA grounds on Saturday as the home side recorded a 6-10 to 0-13 win.

An O’Byrne Cup defeat in January won’t be remembered in the greater scheme of things and as Laois seek to pick themselves up quickly for the visit of Meath on Wednesday night, there were a handful of observations from Billy Sheehan’s first outing as manager.

The 21 new players involved with the 40+ squad was something we highlighted last week and the first signs of that were visible in Shelmaliers yesterday.

Six of the team that started the first half and five more that featured in the second half were either making their first ever appearance for the Laois seniors or, in the case of Sean Moore, Adam Campion and James Finn, their first in a number of years.

With numerous subs allowed, Laois made nine changes at half time and another one at the second water break. Conal Brennan (Arles-Kilcruise), Dylan Kavanagh (The Heath) and Dylan Doyle (St Joseph’s) started the game while Collins Ugochoku (Courtwood), Alex Mohan (Portarlington), Cathal Fennessy (Ballylinan), Podge Dunne (Park-Ratheniska), Liam Senior (Clonaslee-St Manman’s) and Joey Shelly (Rosenallis) all came on in the second half.

Further new faces can expected in Wednesday’s game against Meath.

But as well as the new faces, there was also a couple of notable positional selections. Trevor Collins started at full-back, John O’Loughlin at centre-back and Paddy O’Sullivan at wing-forward.

As Sheehan and his management look to settle on a team, it will be interesting to see what else they’re looking at against both Meath on Wednesday in Stradbally and Wicklow in Crettyard on Saturday.

The 6-10 to 0-13 loss was the most one-sided result of Saturday’s pre-season schedule of games as Wexford struck for three goals in the opening quarter and three more in the second half.

It’s never nice to ship such a score but it will be an irrelevance in the overall scheme of things and while Laois will no doubt seek to tighten up at the back, the result will be put to the back of the mind pretty quickly.

Even though Wexford are a Division 4 team – and fielded only half the team that ran Dublin to eight points in last year’s Leinster quarter-final – they’re in their third season under manager Shane Roche and were a step ahead of Laois on Saturday.

Big defeats aren’t an anomaly at this time of the year and Laois will be hoping to pick things up as soon as possible.

Among the flickering signs of encouragement was the Laois starting full-forward line of Sean Moore, Evan O’Carroll and Mark Barry.

The three regularly post big scores in the club championship and all have a touch of magic about them. Barry was probably the most impressive of the three in that opening 35 minutes but there brief signs of them linking up well – something that will only improve with more game time.

Gary Walsh did well when he came on while Ross Munnelly, appearing in a frankly incredible 20th successive season, was the only forward to score from play in the second half.

It would be easy to dismiss the entire game given the final score, but there were a handful of players showed well in phases of the game.

Sean O’Flynn looked very lively at wing-back in the first half, James Finn and Brian Daly both kicked nice points from distance and debutants Podge Dunne and Cathal Fennessy did well in the second half.

Collins Ugochukwu became the first Nigerian-born player to make an appearance for the Laois senior team as his rise continues at pace.

He came to live in Ireland when he was about three and lived in Newbridge, where he played with Sarsfields, until his late teens. Also a talented soccer player, he was in the UK until last year playing soccer at academy level before moving back to Ireland in 2020 and transferring to Courtwood and playing in the 2021 club championship.

He came on at half time in the full-back line and will likely see more game time in the next two outings.

Laois host Meath in Stradbally on Wednesday night and Wicklow in Crettyard on Saturday.

The opening round of the Division 3 campaign against Mickey Harte’s Louth – who lost to Billy O’Loughlin’s Longford side on Saturday – is in Ardee on Sunday, January 30.