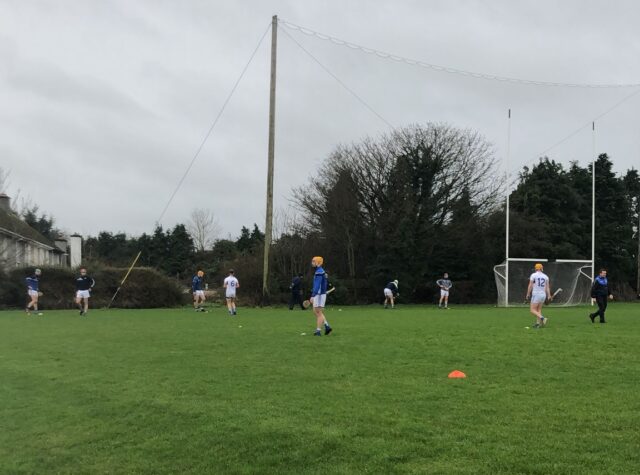 The Laois hurlers made a losing start to 2022 in Rathdowney on Sunday afternoon but they were far from disgraced as they put in a very competitive display against Wexford.

Seamas ‘Cheddar’ Plunkett’s charges were in this one right until Richie Lawlor’s goal in the 44th minute.

The gap was just four points at that stage and although Wexford went on to win by 12 in the end, Laois can take plenty of heart from what was a very spirited display.

Below, we take a more in-depth look at how the game unfolded:

Sunday’s game allowed us to see some players make their debuts and others who haven’t played that often get some game time.

Frank Flanagan started the game at corner back and came out with an ocean of ball, one of just three players to play the full 70 minutes as he finished at full back.

Ben Conroy was another as he hurled very well from centre forward and was involved in a lot of Laois’s good attacking play.

Liam O’Connell and Aidan Corby returned to the county scene after years away and didn’t look one bit out of place.

While Cathal Dunne, Jordan Walshe, Ciaran Conroy, Seamus Fitzpatrick and Padraic Dunne all made their debuts from the bench. All showed that they have something to offer at this level.

Laois’s last meeting with Wexford was in the Leinster championship last summer where Wexford won 5-31 to 1-23.

Laois played with a sweeper that day and tried to sit off Wexford – a tactic that did not work.

On Sunday, they stepped up to their opponents and took them on, competing very well.

3 – Impressive half back line

While there were good performances across the field, Laois’s best line was undoubtedly their half back line.

Podge Delaney, Liam O’Connell and Ryan Mullaney were very dominant in the first half – winning several Wexford puck-outs with Mullaney scoring a point from one of these.

Jack Kelly slotted in there for the second half and he also continued that with a fine point.

Laois’s season in 2021 was blighted by slow starts as most games were over by half time – such was the margin between them and their opponents on the scoreboard.

This happened again on Sunday as Wexford led 0-9 to 1-1 at the first water break – and it could’ve been worse as they missed a penalty and fired eight wides in that period.

This will be something that they must seek to eradicate in 2022.

Sunday’s game was the first to be played in Rathdowney since they carried out remedial work and it is a fine job.

The pitch, now fully enclosed by a fence, has been moved over to the right with a second pitch now located behind it.

Their brand new scoreboard is lovely too. Fair play to all involved!

Laois’s Walsh Cup campaign continues next weekend when they travel to Callan to face Kilkenny.

So after that, Laois will have a few weeks off before they take on Tipperary in Round 1 of the league.