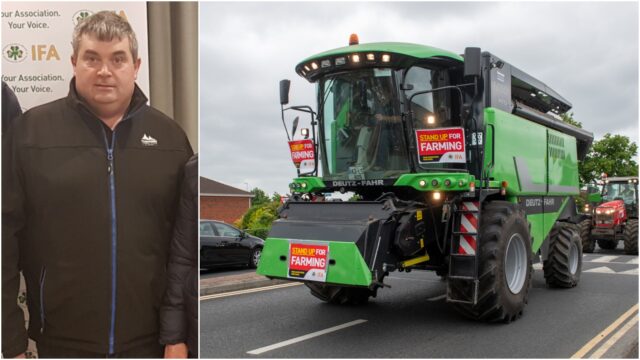 Emo-based farmer Kieran McEvoy has been elected as chairman of the IFA’s national grain committee.

The tillage farmer, who has been Laois IFA grain chairman for the past number of years, had been serving as national vice-chair, and will now take over the chairmanship from Mark Browne at this month’s AGM.

A number of the IFA committees across the various farming sectors elected new chairs this week.

Kieran has been farming at Emo for over 30 years and has been an active member of Laois IFA in recent times.

IFA President Tim Cullinan recently led a delegation from the National Grain Committee to meet Minister for Agriculture Charlie McConalogue to discuss the impact of the draft CAP reforms on commercial tillage farmers in Ireland.

“There are over 4,500 specialist tillage farmers in the country and many of their incomes will be significantly reduced by the new CAP proposals,” said an IFA statement.

“A tillage farmer with €400/ha entitlements will be at least €120/ha worse off by 2027 when eco schemes, CRISS and convergence are factored in.

“IFA asked the Minister to address this issue. Minister McConalogue acknowledged the difficulties facing many tillage farmers in the coming years”.

“The difficulties surrounding leased entitlements in the coming years were also highlighted to Minister McConalogue and his team.  Over 40% of the tillage area is on leased or rented lands and the sector must remain competitive in this land market,” they added.

The delegation also raised the urgent need for a specialist tillage scheme with the Minister to address the reduction in income that will be faced by tillage farmers from 2023.

“The Straw Incorporation Measure and a €7m coupled Protein Aid fund are positive developments, but another scheme is required for the tillage sector.”