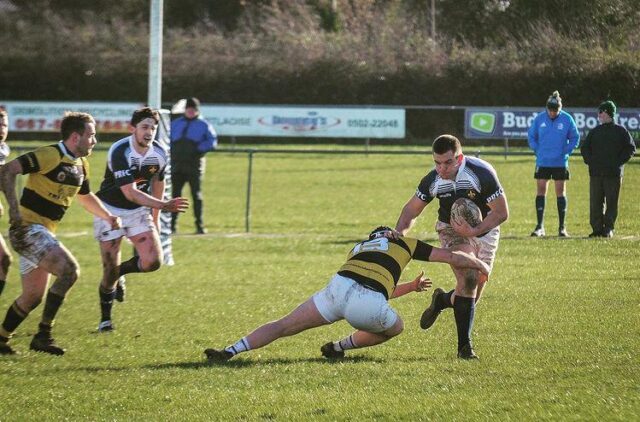 Leading by 30 points to ten with just 14 minutes left on the clock in Togher on Sunday, Portlaoise looked well on the way to securing a crucial win in their battle to retain their Division 2A status for another season.

Certainly no one associated with Portlaoise were taking victory as a given but few could have imagined that they would cough up three converted tries and lose the game by a sickening single point.

This was a game that Portlaoise could have won. Their forwards generally dominated their Newbridge counterparts but it was across the back like that was the difference.

The visitors three-quarters looked very dangerous when given space, and unfortunately Portlaoise gave them too much of that. Too often kicks failed to find touch and with no great chase, Newbridge made hay.

Playing with a very strong wind which blew straight down the field Portlaoise opened the scoring in the eighth minute with a Jack Reddin penalty.

But within six minutes Newbridge had hot the front when winger Zach Meehan latched on to a pass from Robbie Waters and ran from near the halfway line to score a try. Again, Waters picked up a loose kick and ran back at Portlaoise for a good try in the 17th minute.

After their slow start, a trait they have exhibited this year, Portlaoise began to grow into the game and added a second penalty from Reddin the 24th minute. This was followed a try.

From a ruck in the middle of the field Jack Reddin broke on the blind-side and fed centre Kevin Griffin. He moved the ball to Ross Cooper who broke two tackles before slipping the ball to Killian O’Connor and his pass to Dara Ramsbottom saw the winger go in for the try. Reddin added the extras.

The home side were now flying high and added a second try in the 38th minute. This time it came from a break made by O’Connor who moved the ball to Cooper who kicked ahead and won the race for the touch down to leave the half time score at 18-10 in favour of Portlaoise.

Portlaoise continued to dominate in the tight on the restart and it was this pressure that led to their third try.

Newbridge conceded a penalty and Portlaoise kicked to the corner. Mark Sherlock won the short line out and after a few pick and drives Cooper crashed over for his second try bringing their lead out to 13 points, and that soon became 20.

Newbridge were doing a lot of the attacking but the side were defending stoutly and when Newbridge fumbled the ball deep inside Portlaoise territory Killian O’Connor gathered and raced the length of the pitch to score under the posts. Reddin again converted and now the home side were ahead 30-10 with 64 minutes on the clock. Credit to Newbridge they never gave up the chase.

As Portlaoise began to tire, Zach Meehan scored a try in the 66th minute which was converted by Waters. Three minutes he was in again for a try after a series of good pressure periods from the Newbridge pack and again Waters converted.

Now the gap was down to just six points but time was now running out for Newbridge. Portlaoise harried and hassled as the legs tired and the looked like they would hold out but with 84 minutes on the clock Newbridge full-back Donal Cashman was afforded too much room and in for a try.

The visitors still needed the conversion to win and Waters slotted it and barley had the ball gone between the sticks than the referee blew the final whistle.

Portlaoise Women welcomed Naas to Togher on Sunday for a fixture that they knew was going to be a tough assignment.

Naas are top of the table and the home side would need everything to go their way if they were to come away with the points.

In the end that did not happen but not because of a lack of effort. Portlaoise threw everything at Naas but were to see their efforts hampered by a number of injuries.

They lost influential outhalf Amy O’Callaghan with a neck injury. Later centre Patrycia Harassim after she received an accidental kick to the head. And by the end of the game three other starting players had departed the scene.

Portlaoise had gotten off to a great start after they turned over the ball in Naas territory.

The ball was whipped across the three-quarters and out to winger Rachel Palmer who displayed a great turn of speed to get around the Naas and run in for her try, and only three minutes on the clock.

But Naas wasted little time in responding. They won the kick off after the score, piled on the pressure, going through the phases and levelled the score in the eighth minute.

Some time later when a Portlaoise kick off did not go the 10 metres Naas took the decision to play the ball, getting it away to their Irish no 8.

As she took off downfield she was shown too much respect by the Portlaoise defence and ran in unopposed under the posts and the conversion gave them a seven point lead.

Approaching half time Portlaoise upped their challenge and put a lot of pressure on the Naas line but their defence held solid and at the break they led 5-12.

The home side started the second half confidently but were stunned just three minutes in. Naas won a turn over and with the Portlaoise defence sucked in they moved the ball swiftly across the line and their winger displayed a turn of foot to get around the corner and score under the posts.

Midway through the half Portlaoise lost a few more players to injury and this disrupted their flow and made life very difficult for them. Even when Naas had a player yellow carded it did not upset them and they scored a break away try to lad 5-26.

But as if to show the resoluteness of this Portlaoise side they would score the last try of the game. From play close to the left wing and inside their own half, Portlaoise won possession and Lynn O’Callaghan, who had displayed a great work-rate all day, passed to Rachel Palmer.

Once again the flying winger backed herself and rounded two defenders to score in the corner.

And that was how it stayed. Portlaoise might have lessened their chances of getting promotion but they can still have a major say in the destination of the title.