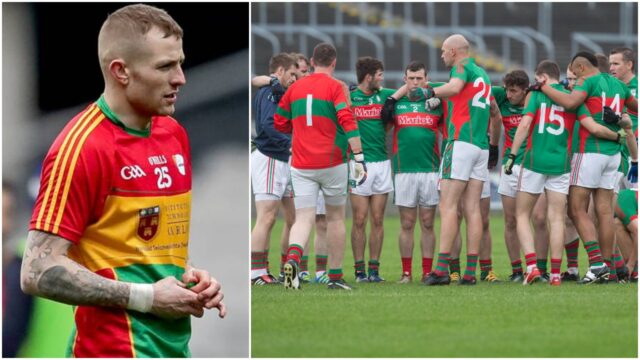 Former Carlow and O’Hanrahan’s footballer Lee Walker began life as a Graiguecullen player in fine fashion as he led his new side to a nine point win tonight.

The lively centre forward kicked 2-6 and tormented Stradbally from start to finish in this Kelly Cup encounter.

Walker and Jamie Sheehan kicked Graiguecullen into an early lead but Stradbally were competitive in the first half.

Debutante Cillian Maher landed a mark while Tom Shiel levelled matters shortly after with a free.

But Walker took his tally to four points before half time with Luke Alsybury also chipping in from a tight angle.

But points from Liam Knowles, Eoin Buggie and Shiel kept the hosts in touch and left the score reading 0-6 to 0-5 in Graiguecullen’s favour at half time.

But the game was over as a contest within five minutes of the restart as Walker fired in two goals.

The first came after Jack Larkin had made a great save from James Doogue but the centre forward was alive to the rebound.

While the second was a real thing of beauty as his pinged an unstoppable shot into the top corner of the net from 20 yards.

Tom Shiel and Cillian Maher were Stradbally’s only scorers in the second half while Ciaran O’Neill came closest to a goal but his effort was cleared off the line by Eoin Alsybury.

But the visitors saw out the win well as Martin Doyle and Aaron Forbes joined the scoreboard by the end.

Graiguecullen can guarantee themselves a place in the semi finals with a win over Timahoe next Tuesday evening in their final group game.