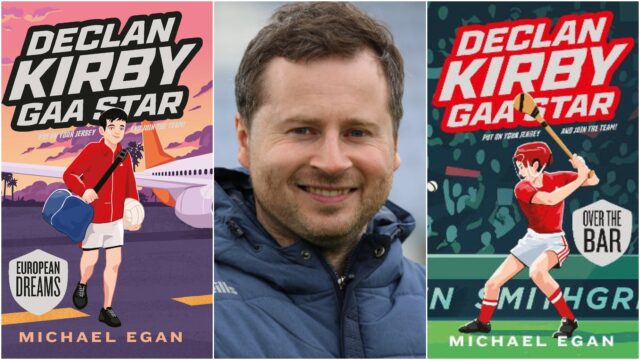 The Killenard man, who works as a primary school teacher and was the brains behind the initial Laois GAA TV offering, published the first two books last year.

And backed by the well-known publisher Gill Books, two more are being released this spring.

The books are based on a fictional U-12 player Declan Kirby who plays with the Smithgreen club and follow his fortunes on the pitch, in school and at home.

The Declan Kirby series are described as “ideal for GAA-loving children aged 9+” and “designed with reluctant readers in mind”.

In the first book of the series, Championship Journey, Smithgreen go on a thrilling run in the championship which earns Declan a call up to the county team. That adventure is then documented in the second book Away Days.

The third book Over the Bar sees Declan take up hurling and join the school team while in European Dreams Smithgreen are invited to play in the World GAA Games in Spain.

Egan began writing the books while on a career break in Brazil but the manuscripts remained on his laptop for two years before he submitted them to Gill Books.

“Upon receiving the submission, Gill Books Commissioning Editor Sarah Liddy knew that Egan’s writing and the characters at Smithgreen GAA Club would instantly appeal to young readers and GAA fans and offered him a four-book deal deal,” said Gill Books.

Over the Bar is to be released and available in all good book shops on March 17 and European Dreams will follow on April 21.