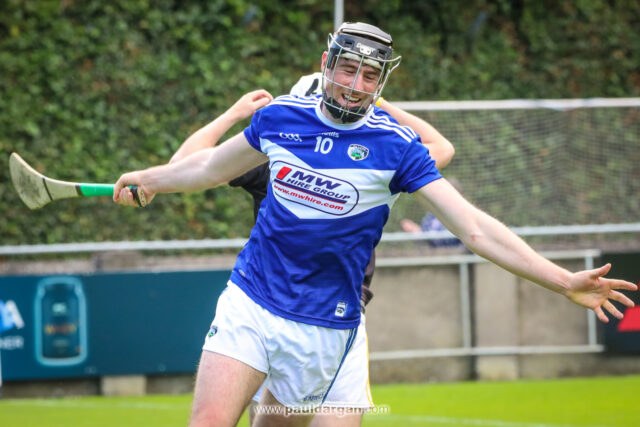 The Laois senior hurlers claimed their first victory of the 2022 season as they saw off Antrim in O’Moore Park.

It was a brilliant win for Laois as they had to play for three quarters of the game with 14 men.

Below, we take a deeper look at the game:

TG4 gave this award to Stephen ‘Picky’ Maher and you couldn’t argue with that as he was excellent.

And there were several others who stuck their hand up too in what was a brilliant team performance.

Ryan Mullaney was brilliant on the half back line while Fiachra C-Fennell and James Keyes covered every blade of grass in midfield.

Cha Dwyer was the hero with his late score while Willie Dunphy was back to his very best – winding up opponents and scoring too.

But we’ve gone for Paddy Purcell. His goal in the first half was magic but it was his role in the second that really impressed.

He went back into his own defence and cut out ball after ball in a really selfless performance.

2 – Explaining why Laois cannot be relegated

It is a win that means they are safe for another year at this level with a game to spare as Antrim cannot catch them.

Even if the Saffrons defeat Tipperary next week and Laois lose to Dublin, Laois will stay ahead of them on the head to head rule and points difference will not matter.

3 – Much improved in front of goal

Wides have killed Laois so far this year and while they did hit 13 in the game, they improved greatly from previous games.

They also only dropped one ball short into the keeper’s hands in either half too. That was crucial in the improvement.

4 – Have Laois a discipline problem?

That was the third time in four games that Laois have been reduced to 14 men from straight red cards.

Paddy Purcell and Ben Conroy were put off in the defeats to Waterford and Tipperary while Jack Kelly went off today.

While Laois managed to win despite this today, the odds do not suggest that doing this as regularly as they are would yield many more.

Playing with a man less for so long, substitutions were always going to play a massive part in today’s game and that’s how it turned out.

PJ Scully was first on and he scored two crucial points. Aidan Corby added some much needed energy while Stephen Bergin was involved in the turnover at the end that helped Laois see out the win.

Waterford defeated Tipperary 1-28 to 0-21 to move top of the table with one round to go.

They will face Kilkenny next week and the winner will advance to the final.

Laois face Dublin in their final league game on Sunday week but the match has no consequence for Laois as they can not be promoted or relegated.

A Dublin win could see them reach the semi finals.

After that, it will be on to the Leinster championship in April.